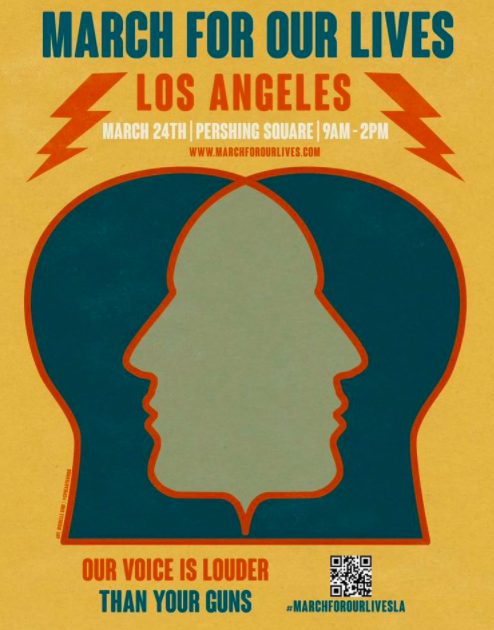 We know you’ve heard of lip-syncing for your life, but this March 24, citizens of L.A. will be asked to do more than that at the March for Our Lives Rally. At 9am next Saturday, folks from across L.A. will meet Downtown to start the march-cum-protest against gun violence as it weaves through the city.

Residents of West Hollywood, however, have a special incentive to show up at the march: Free transportation. That’s right, the City of West Hollywood will provide free shuttle service to the Pershing Square stop and back during the march. So if you were thinking about making any car-related excuses, don’t! WeHo has you covered. Per the press release:

“The first CityLineX shuttles will depart at 7:30 a.m. from stops at the West Hollywood Library located at 625 N. San Vicente Boulevard, and from Santa Monica Boulevard and Crescent Heights. A second CityLineX shuttle departure from the West Hollywood Library is scheduled to depart at 8:20 a.m. In addition to the shuttles coming from the library, stops from Crescent Heights east will have additional service with runs starting at 8 a.m. and 8:30 a.m. All times are approximate; passengers should allow several minutes leeway to allow for varying traffic conditions. CityLineX will pick passengers up at its regular stops along Santa Monica Boulevard, which include San Vicente, Westbourne, La Cienega, Sweetzer, Crescent Heights, Fairfax, and La Brea, en route to the Metro Red Line Station at Hollywood & Highland. March for Our Lives attendees are advised to use Metro Red Line service toward Downtown Los Angeles and exit at Pershing Square/5th Street.”

So show up and March for Your Life on the 24th! For more details about the march, visit the event page here.