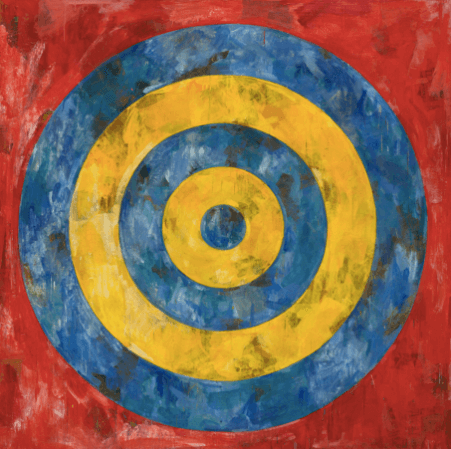 With more than 120 of paintings, prints, and sculptures by the American artist Jasper Johns on display, the Broad’s new special exhibition, “Something Resembling Truth,” hopes to put a life into context. The exhibit, presented in collaboration with the Royal Academy in London, will show Johns’ work across mediums spanning from the 1950s to the 2000s.

If you’ve heard of Johns, it’s probably due to his iconic pieces of flags, targets, and collage-like efforts reminiscent of Warhol (whom he knew) and Rauschenberg (whom he dated and lived with.) Like those artists, Johns’ work thrived on the repetition of familiar visual themes. By recreating flags, targets, and household objects in his own image (muddy, speckled, paint-splattered) Johns rendered hundreds of images of seemingly ordinary staples of American life in an extraordinary way. He was also really into texture, in a way that the more formal semiotists, like Warhol, were not. Johns wasn’t simply interested in reproducing things until they lost all meaning or became something unfamiliar. He seemed to want to coat them in ordinariness, hence his focus on the same few, heavily-weighted symbols throughout his 60-year career.

So how does Johns’ identity as a gay artist come into his work? This is something that, surprisingly, hasn’t been overexplored or exploited even in recent years. Although Johns’ work was inspired by his friends and lovers, many of whom were gay (Merce Cunningham and Frank O’Hara, to name just a few,) he seems to be one of those few artists whose queerness, even during the height of the 60s and 70s, didn’t find its way into what he was trying to say about symbols, art, and life. Or if it did, it didn’t become a distracting part of his biography in the way that it has for other artists doing similar things, like Warhol, Marsden Hartley or even David Hockney. Johns work stands on its own and asks for no real biographical context. Which, in the art world of today, is incredibly refreshing, if maddening for those of us wanting to look deeper.

Jasper Johns: Something Resembling Truth will run at the Broad until May 13.