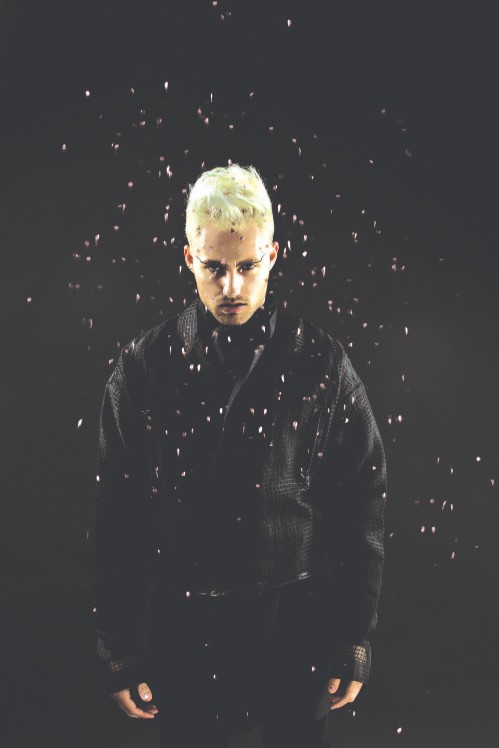 Live music in L.A. is one of two things: A giant, sold-out show at the Greek, or a tiny soundstage somewhere in Silver Lake full of packed-together crowds and gentle acoustics. L.A. singer Rilan combines the best of both worlds, packing small stages with huge performances at venues all around town. The New Orleans-born sensation got his start on “Glee” and came into his own with his first EP “Chemical” in 2015. This year, we’re about to see a flurry of new Rilan songs and local shows. Coming off a gig at DTLA’s the Peppermint Club, Rilan spoke to us about great queer music and the importance of statement pop.

How was your recent show?

It was good, I think it went well. We had a good turnout and got pretty weird on stage.

I play a lot of club shows, and I don’t really believe in catering to a small stage. So I have my eight dancers with me and some kind of crazy gags I like to do on stage. It’s more fun to entertain people on a smaller stage as if it were a bigger stage.

What are the gags? I’m curious!

I have this character called “Riley Replacement,” and it’s about how social media stars have basically replaced musicians and actors and people in entertainment. So she comes out, and she’s in a nude morph body suit. She has no face or features, but she has balloons in her chest, balloons in her ass. And it gets a little crazy. It talks about how she moved down from Calabasas to Hollywood and had her mom buy her new boobs and ass and a new face, and it doesn’t really work and so she sells her soul. So I do a cover of  “Oops, I Did It Again” with a skull mask and a dresser on stage. She takes off her wig, they undress her from the back and money falls out and gloves fall out. We get a little crazy and weird.

So you’ve lived here for awhile?

So you’ve seen the Instagram takeover of the city firsthand.

Yes, exactly. And naturally I’m not really into social media, like personally I’m super shy so it feels weird for me to advertise myself like that, but it’s a necessary animal now. I get through it by making fun of it.

Would you call your recent album a concept album in that way? Or is the weird stuff more reserved for live shows?

No, it’s definitely a concept album.  All the artists that I grew up listening to and am inspired by had a message tied to each album. I’m a huge David Bowie fan, and “Ziggy Stardust” is one of my favorite albums of all time. He created Ziggy and that was so cool to me. Every album, he had had a character attached. I’m also a big fan of Prince and Madonna, who had a ton of spectacle in their performances. There was always something else besides just the music. They weren’t just standing onstage and singing, there was something else going on to entertain everybody visually. So I’d say this is kind of about my journey through Hollywood. I moved here when I was 19 alone and I had to navigate everything myself. It’s about the ridiculousness that happens here.

You’ve been called the “male Lady Gaga.” How do you feel about that?

I mean, that’s an honor to be called that, as a Gaga fan. I wouldn’t call myself Gaga, she’s incredible and has her own thing going on. She’s a concept artist too, but I think I might be doing something a little darker. I’m a total ex-emo kid. So like, I grew up with 80s music, but then I was a teenager in the early and mid-‘00s, so I loved “Panic at the Disco” and “My Chemical Romance.” All those emo bands. That’s partly where my lyricism comes from. But I was also hugely influenced by pop growing up.

What are you most excited about for this year?

I’m really looking forward to getting new music out. It’s been awhile, and I’ve been through the ringer. You go through different management, behind the scenes stuff. People think you’re just kind of chilling out there by, but there’s so much stuff going on, which is why the music isn’t out yet. But I’m finally in a place where I can do exactly what I want creatively. I can’t wait to show people what I’ve been working on, and to actually be able to talk about something. I feel like recently, music has been a little surface level for awhile.  And I think everything culturally with the youth movement and Time’s Up, with all these people talking about issues that matter in pop culture coming out, I think it will help to have music that talks about that as well. So I’m excited to get the new music out and bring pop music back because it’s kind of been dying for a long time. Everything goes through fads and trends, so it’s been sort of dormant right now. But I think pop’s going to have a major resurgence.