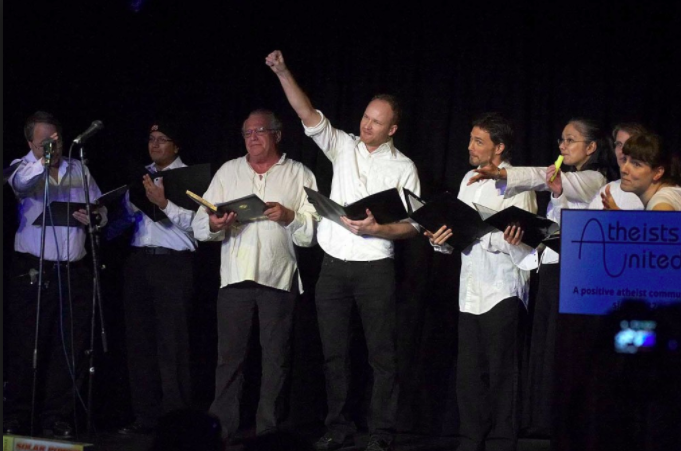 For many LGBTQ+ individuals, the holidays can be a painful time full of questioning, isolation, and your run-of-the-mill seasonal affective disorder. Throw in the jingling bells of a Salvation Army Santa outside of your local Whole Foods, along with the onslaught of Christmas carols being piped through every Vons in the city, and it’s easy to get a bit overwhelmed. Delightful as the Christmas spirit is, it can be a bit much for queer folks and straight folks alike who are just looking to get through the weekday without hearing yet another aggressive rendition of “Good King Wenceslas” in the public sphere.

Enter Voices of Reason, L.A.’s one and only atheist choir, dedicated to spreading good cheer without the schlockiness and ‘fa la la la laing’ of it all. Begun in 2001, Voices of Reason brings together amateur singers and performers to indulge in a love of secular song. After breaking up in 2004, the choir started up again in 2011 and has been going strong ever since, thanks to one of its organizers Amanda MacLean. MacLean, who had sung in her college choir for years, was sick of singing religious, Roman Catholic-oriented songs for no reason.

“I thought, ‘We are in a school choir that is government funded, why are we always singing religious stuff?’” MacLean told L.A. Weekly.

‘Voices of Reason’ is attached to the group Atheists United and performs at meetings often. However, they’re not opposed to branching out. According to the Voice of Reason Meetup page, anyone can join in to sing a mix of Sammy Davis Jr., Monty Python originals, and show tunes at gatherings, always  “with a humanist twist.” The group practices regularly in Echo Park.

“Our group is really about having fun and becoming better musicians, first and foremost.” The Meetup page explains. “It really doesn’t matter what your religious or political beliefs are, as the ultimate agenda of this group is to sound great together and entertain.”

Voices of Reason will perform on Saturday, December 16 at 7 p.m. at East West Players.