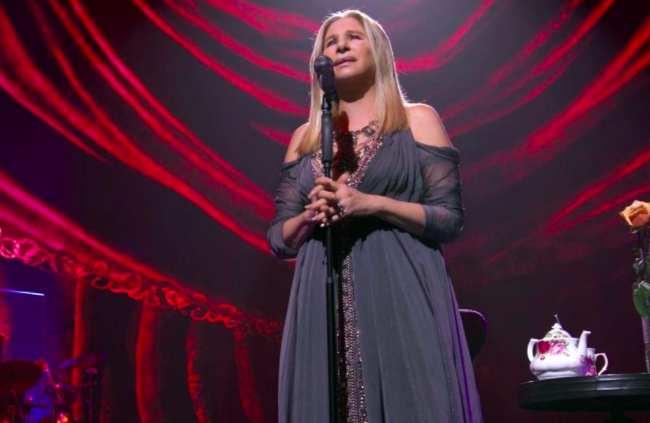 In the last episode of the recently (lamentably!) canceled “Difficult People,” a dance instructor notes that “some people find Sondheim not very catchy and hard to dance to,” quickly adding, “and to those people I say, ‘go fuck yourself!’”

There’s a familiar sentiment in the air when it comes to Barbra Streisand’s effect on queer culture. Sure, there are some who say that Barbra, like Judy Garland, Dolly Parton, and other outsized grande dames of the past, simply have no place in the queer landscape of the present. And to those people we say…well, you can guess.

That said, those who have no fondness for kitsch and nostalgia will not find the new Netflix concert special “Barbra: The Music…The Mem’ries…The Magic!” enjoyable. While Streisand could never be accused of resting on her laurels, it is the spirit of nostalgia that guides us through the story – if it could be called that – of the concert itself, as we follow Barbra through her by now familiar repertoire. A bit of “Yentl,” a bit of “Funny Girl,” even a smattering of “Funny Lady” for the three people who enjoyed that tragic sequel. We’re also given a privileged glimpse into the backstage life of La Streisand, as she cavorts with her dog Sammie (R.I.P.) and eats key lime pie and crab. And in the midst of all of it we’re left to wonder, who, actually, is Barbra Streisand? Who is the woman who famously owns a mall attached to her home? Who is the woman who paved the way for other women who dared to have anything more than the tiniest button nose in Hollywood? Who is the Funny Lady who changed the game for good?

If you’re looking for answers for these questions, you’re probably not going to find them in “Barbra,” or anywhere else for that matter. Happily, not many of us are in a huge rush to get to the bottom of the Streisand mystique. Most of us are content to bask in the Barbra facade, thrilled that there is still here living and thriving among us a woman whose godlike performer status remains untouched and untouchable by the passage of time and the changing of political regimes. In the beginning, there was Barbra, and in the end, you bet your ass there will still be Barbra. Who can say the same for the pop starlets of today? Who can promise that, out of the crop of Disney proteges and aging American Idols there will be one left among them with talent substantial enough to stand the test of time? The Streisand legacy, though it does rest heavily on nostalgia, is actually built of stronger stuff. For one, her voice seems to get stronger with age, in the way that a late-career Frank Sinatra’s did, breaking your heart with every new ballad, however cheesy. She also tries to convert the music into message without overstating the case. Singing one of Carole King’s anti-war ballads in front of a backdrop of tragic, violent images, she says “what a waste of a planet.” Indeed, Barbra. But as long as we can claim Streisand among our number, we can’t ever claim that we’re not the luckiest people in the world.