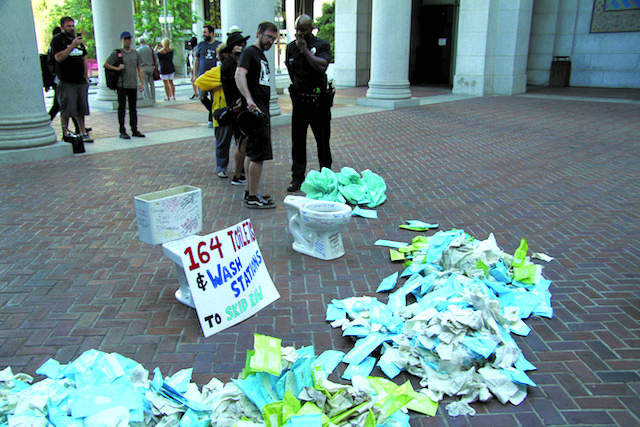 Protesters took to Los Angeles City Hall Oct. 25 to address the shortage of toilets for the homeless population on Skid Row by attempting to carry toilets to Mayor Eric Garcetti’s office. There were messages on the toilets from the people of Skid Row. Since the toilets were made of porcelain, they were prohibited from entering the building and remained near the entrance of the building as protesters from Los Angeles Catholic Worker and the Los Angeles Community Action Network entered the fourth floor to occupy all of the toilets next to City Council offices. The protesters blocked off over 16 stalls for about four hours.

Jed Poole, a supervising coordinator at L.A. Catholic Worker, was one of the protesters present. Poole recalled that although there were quite a number of people that were upset at the inconvenience, it did open a great dialogue with others as well.

He told LAist, “People were trying to get in. A couple people were sort of upset, but we did get a lot of words of support. I definitely feel like it brought up a conversation that had already been going on.”

Outside the walls of City Hall, the rally took place with the dumping of collected used disposable hand towels in front of the graffitied toilets. There were no arrests made.

Having a shortage of toilets during a time of high rates of infections of Hepatitis A is even more concerning, especially when half of the people affected were homeless, according to the L.A. Times.

Since the disease is transferred through feces, the conditions of Skid Row toilets can be a very high-risk zone for contracting the disease. For homeless individuals who identify as LGBT+, the risk of infection is even greater.

L.A. Catholic Worker is advocating for at least 164 additional restrooms that meet the United Nations standards for refugee camps.

The call for action requires there be basic human needs met by better standards of restrooms with access to sinks and other means of proper hygiene.

There are only nine toilets for over a thousand people living on the streets of downtown after former mayor Antonio Villaraigosa pulled out some of the restrooms after discovering they were used for prostitution and drugs.

After the City was cited for inexcusable conditions by the Los Angeles County Public Health Department, the improvements made thereafter were not sufficient and did not fix the issue of providing enough restrooms.

The motion for Los Angeles to consider a plan to implement portable toilets around the parts of the city with the most vulnerable populations of people passed earlier this month as a step toward resolving this long term issue.