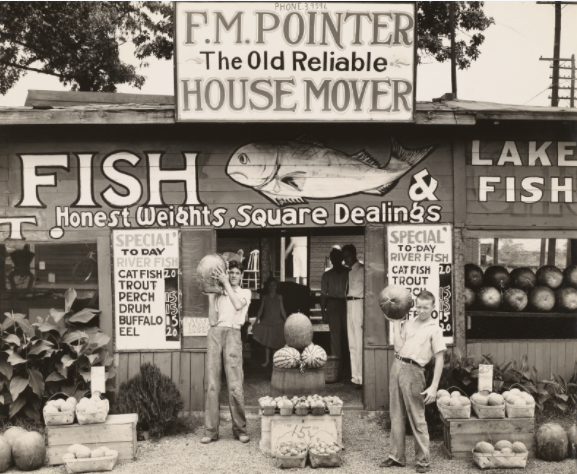 It feels like you couldn’t find two artists more diametrically opposed than Yayoi Kusama and Walker Evans: One, a titan of realism, capturing the Depression-era devastation of the American Midwest, the other a master of whimsy and fantasy, designing immersive works of art that reflect life as it should be, not as it is. But that’s just at first glimpse. Something curious happens when you take a closer look, and then a closer one. Which, of course, is just what The Broad – which commissioned new works (specifically Infinity Rooms) by Kusama for October – and SFMOMA, borrowing heavily from L.A.’s Getty museum to mount a Walker Evans retrospective for September – are asking us to do.

Kusama’s work has had something of a cult audience since the late sixties when she starting bringing her specific brand of protest art to life, and to the street. Her “body festivals” were a psychedelic infusion of polka dots, anti-war protesting, performance art, and good old-fashioned nudity. The artist, now in nearly in her ‘90s, has stayed true to her early aesthetic while popping it out into a full 3D experience. Each Infinity Room (specifically created for the Broad for this exhibit) is a twinkling paradise of lights, stars, shapes, and elongated gourd structures that invite the viewer to play, experience and live within the art, if only for a few moments. That might explain why the Broad usually has a 2+ hour wait just to get in. When it comes to Kusama, everybody and their Instagram account wants a piece of the pie.

Walker Evans, on the other hand, focused on the tragically real – the world as it exists without the relief of fantasy. It was this that made (and still makes) his work so moving. For today’s audience especially, who has little recourse to images of the ‘30s and ‘40s outside of the hyper-glamorized output of Hollywood, Evans’ work presents a picture of the past stripped bare of glitter and pretense. Evans’ contemporary audience wasn’t so different – they didn’t have many chances to see themselves represented as real, living beings, warts and all. Which is perhaps why Evans’ work was as controversial as it was back in the day, starting with his photo series co-written by James Agee, “Let Us Now Praise Famous Men,” which was by turns exalted as brilliant photojournalism and criticized as exploitation. To be fair, it’s always been a bit of both with Evans. Which is how his work ends up having something in common with the fantastical flights of Kusama after all. No matter how “real” reality gets, there’s always the mark of the artist’s brush upon it. Both Walker and Kusama knew this well, even as they traveled on their vastly different paths.