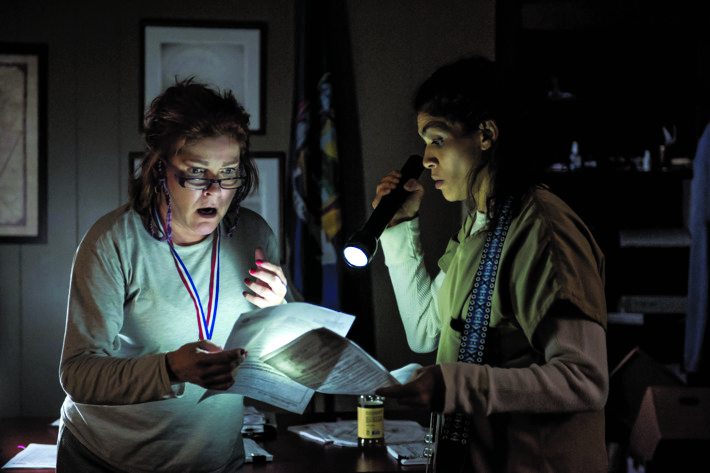 They call it POITNBSD. Post- “Orange is the New Black” Syndrome. Or if they don’t, they really should. If there’s one thing we know about showrunner Jenji Kohan’s prestige Netflix show, now in its fifth season, it’s that no punches are ever pulled. And we mean ever.

When Kohan conceived of a prison drama that would put a white woman at the center of a multicultural universe divided by patriarchal rule and class hatred, she made it quite clear to us that if we were going to try to view “Orange is the New Black” as mindless entertainment, we’d have a hard time of it. At very least, we’d have to come out of our binge-watching coma feeling heavily politically implicated.

What’s different – and shocking – about the fifth season of an initially singular show – is how it manages to pull itself out of the water time and again. When season four ended last year, with one of the most beloved characters meeting her unceremonious (and deeply politicized) death, and a standoff that left a potentially life-ruining decision in the hands of another intensely loveable character, the Internet wasted no time in dragging Kohan across the coals. Sure, she’d left us with an incredible cliffhanger, a swell of dramatic tension, and a climax that left both the prisoners and prison workers in a potentially mutually destructive situation. But she’d sacrificed one of her most important characters to do it. No one knew if the show could survive the death of Poussey Washington – or if the next, Poussey-less season of “Orange is the New Black” was going to quite live up to its Orange is the New Crack reputation. Were the fans just too betrayed? Had they finally had enough?

Well, in a word, no. Season five arrived last Friday, without too much fanfare, and we were hit with the drama all over again. Of course, no one had forgotten about Poussey. But with the prison in full chaos mode, every character dealing, in her own way, with the political implications of an impending riot, and a number of main characters splintering fully off to do their own insane thing, viewers were almost distracted enough not to want to look backward.

Last season ended just on the heels of the Pulse massacre, which also dovetailed with the end of L.A. Pride, making the politics of the show feel just a little more wrenchingly painful than they might have in an alternate universe. Add to this season the reality of the once-unthought-of election of Donald Trump, the year anniversary of the Pulse shooting, and the release of Chelsea Manning from prison, and we have a whole new, arguably much more complicated world in which to watch the trials and tribulations of our favorite social justice warrior prisoners. So has “Orange is the New Black” lost its edge? Not at all. Has it adapted? Certainly. But you might say that it came into existence, at the very start, to help us adapt. To give us more tools with which to battle an increasingly frightening, hostile, and unjust world. And for that, the show deserves its place in the pantheon.