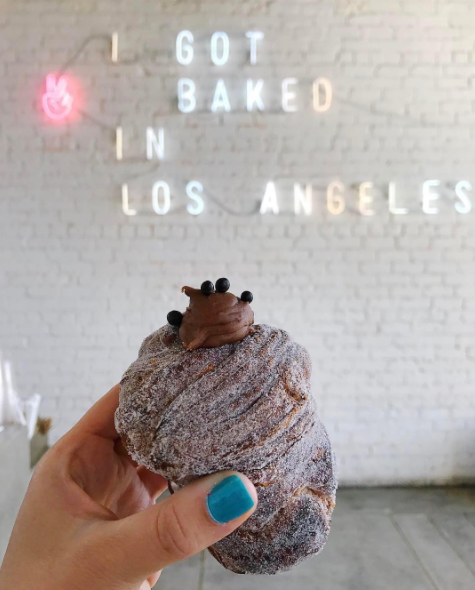 Since September, the legendary San Francisco bakery, Mr. Holmes Bakehouse, has been executing a subtle takeover of Los Angeles. And quite frankly, L.A. isn’t putting up that much of a fight. Mr. Holmes is famous for its “cruffin” hybrid, a combination of croissant and muffin (often cream-filled) that tourists and Angelenos alike have to line up for at the crack of dawn in order to snag. And even the unlucky ones who arrive after the cruffin has sold out can console themselves with a savory “California Roll” croissant, featuring a salmon-and-seaweed filling, or an orange blossom-and-vanilla donut. Mr. Holmes’ first L.A. location opened last fall in Highland Park and has since spread to Melrose, Orange County, and most recently, Larchmont. The Instagram-friendly interior (white with bright hints of neon pink) and retail-oriented storefront makes Mr. Holmes a natural fit for the new Larchmont Boulevard location, only a stone’s (or should we say ‘scone’s?’) throw away from Larchmont mainstay Bricks and Scones. [button color=”” size=”” type=”” target=”” link=””][/button]