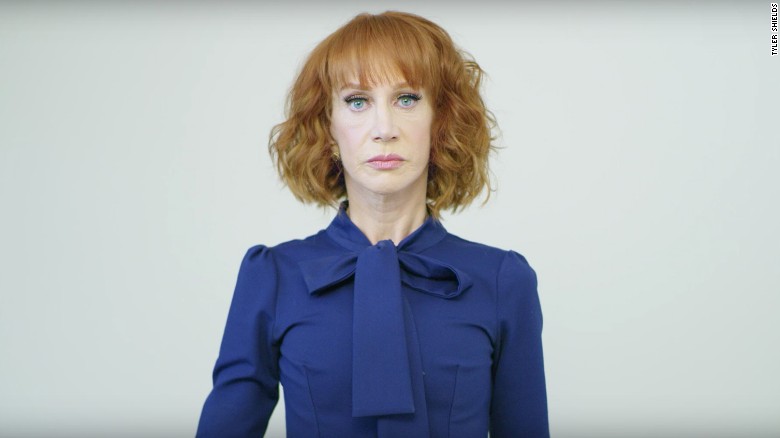 BY GENNA RIVIECCIO | Kathy Griffin has been an unsung hero of gays everywhere since her role as restaurant critic Vicki Groener on the little appreciated late-90’s sitcom, “Suddenly Susan.” Since the pinnacle of her success, Griffin has played into her D-list celebrity status, even going so far as to make a reality show about it called, what else, “Kathy Griffin: My Life on the D-List.” It was around the time it premiered – 2005 – that she probably hit her stride in the gay community, garnering numerous GLAAD Media Awards for Best Reality Program.

Since the show’s end in 2010, Griffin has still found plenty of ways to remain busy between standup and a slew of random public appearances–often in Vegas. But it wasn’t until her rather literal skewering of “President” Donald Trump that she attracted a more vicious type of attention than usual. No stranger to courting controversy, her humor has generally gotten her banned on every talk show except the uber straight white male likes of Bill Maher and Howard Stern. But she’s never had a place on “feminist” outlets like “The View” or “Ellen.” Incidentally, could this speak toward the latent misogyny gay men feel toward women and the natural shine they take to Griffin?

But, somewhat ironically, it has been Griffin’s only distinctly feminist act in beheading Trump via the now-notorious picture from her photo shoot with Tyler Shields that has brought her fully under fire – even more than that time when she essentially told Jesus to f- off in her Emmy acceptance speech and then lost her cameo privileges on “Hannah Montana.” Posted on Instagram and Twitter in late May, Griffin wrote beneath the image “I caption this ‘there was blood coming out of his eyes, blood coming out of his…wherever.” This alluded to Trump’s interview with Megyn Kelly back in 2015, of which he stated, “She gets out and she starts asking me all sorts of ridiculous questions…You could see there was blood coming out of her eyes, blood coming out of her wherever. In my opinion, she was off base.” Griffin’s contempt for Trump’s misogyny was addressed at her press conference regarding the so-called “vile” (by Chelsea Clinton no less) form of artistic expression. She commented, “I’ve dealt with older white guys trying to keep me down my whole life, my whole career. I’m a woman in a very male-dominated field.” Her defense of women comes at a time when it’s more important and political than ever, ergo a point of high contention for those of Trump’s old guard status still clinging to keeping things as they were. But even the gays were hesitant at first to support Griffin’s “art,” Tyler Shields being the only publicly gay person to come to her defense right away with the tweet, “Can you go to jail for making an artistic statement??? Asking for a friend…”

Nonetheless, it’s possible that this bold act of defiance just might make Griffin even more lauded by the gays in the long run. After all, if Anderson Cooper, pied piper of the homosexual nation, wills it so with his recent remark, “I want nothing but good things for her,” so shall it be among the entire gay community.  Although, at the outset of the “incident,” Cooper did his best to remain on Team CNN by remarking, “You know, I think I said that I thought it was completely inappropriate and I didn’t approve it in any way, and I think when you’re friends with somebody, you can say that.” But isn’t being “inappropriate” what makes Griffin so wonderfully queer in the first place?