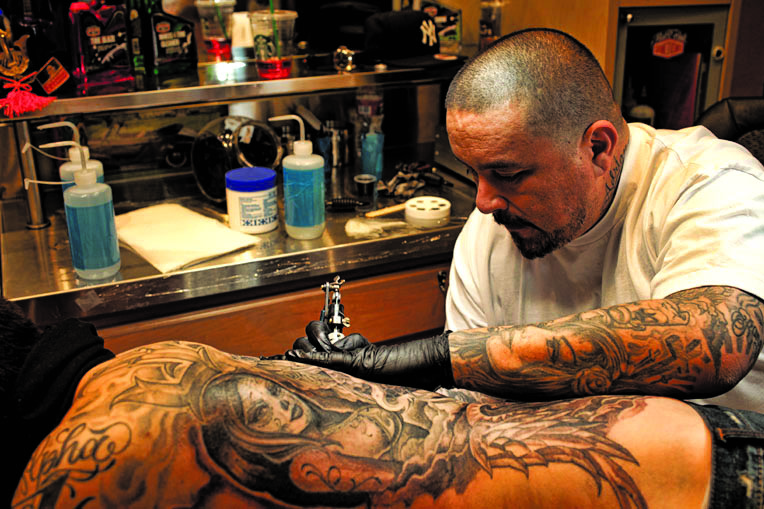 BY ANNETTE SEMERDJIAN| Hip hop’s favorite tattoo artist is the one and only Mr. Cartoon from the City of Angels. Some of his A-list clients include Snoop Dogg, 50 Cent, Dr. Dre, YG, Method Man and even Beyonce. He also created some logos for artists such as Cypress Hill and Eminem. He even designed some of the gang writing for everyone’s favorite video game, “Grand Theft Auto.” Mr. Cartoon has taken everything LA culture and put it into his widespread designs.

Many people turn their bodies into works of art by showcasing their life experiences and aspirations through the inked images on their skin. From the struggles to the good fortune, people scar themselves out of their own volition as a marker of their identity. As Mr. Cartoon puts it, “through our tattoos, we tell our own personal story of our past experiences and also of our dream life.”

Mark Machado a.k.a. Mister Cartoon grew up in the Los Angeles Harbor Region. His Mexican-American heritage influences much of his fine line black and gray work. His designs have roots in graffiti art and airbrushing t-shirts before becoming a tattooing legend. “What distinguishes L.A. and its art scene is its history and its personal story – from the Zoot Suit era to the romance and violence of the stories of the streets,” Mr. Cartoon told Vice. Zoot Suits were sported mostly by Mexican-Americans in Los Angeles as they took the signature style to stand out in the city that was erupting with violence against Chicanos during the 1940s.

Mr. Cartoon also talked about the immense level of pride in representing the neighborhoods of L.A. where there is also a love of classic cars.

In a recent trip to New York for a show by Tequila Cazadores, he brought the life and culture of L.A. to the Meatpacking District. The theme was “Never Forget Where You Came From” and Mr. Cartoon spray-painted a visual story of the Day of the Dead. The canvas he chose was none other than a paleta cart, which many L.A. residents have a enjoyed an ice cream or two from. “I took something that’s rough from the streets and polished it like a diamond,” he said about working on the paleta cart in his interview with Vice. The other pieces he worked on captured the essence of SoCal and its Lowrider culture.

L.A. black and gray tattoos are very popular, and when Mr. Cartoon’s skills hit the tattooing scene, his work eventually found prominence among Hollywood’s biggest names. His Downtown L.A. tattoo shop is pretty hard to find and quite exclusive as Mr. Cartoon’s popularity grows. Even as he ventures into the automotive business with his designs, he makes sure to keep his art and himself an Angeleno for life.