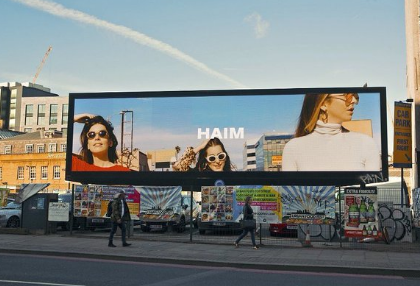 Hey, remember HAIM, the ultra-cool, ultra-West Coast band made up of three sisters from the San Fernando Valley?

You might not, because 2013 was awhile ago (some might say lifetimes ago) and that was the last time we were blessed with new music from the sisterly triad.

But hark, new music from HAIM is right around the corner, as evidenced by a series of billboards around the country teasing their sophomore album, slated to drop any minute now.

We don’t know too much about the album, but as usual it’s a full-on California experience, as evidenced by the imagery we’ve seen thus far. Formerly known as the “Valli Girls”, we’d expect nothing less from the HAIM ladies.

The band recently tweeted confirmation (of a sort) that new music would be coming soon–after promptly deleting the tweet. The plot thickens.