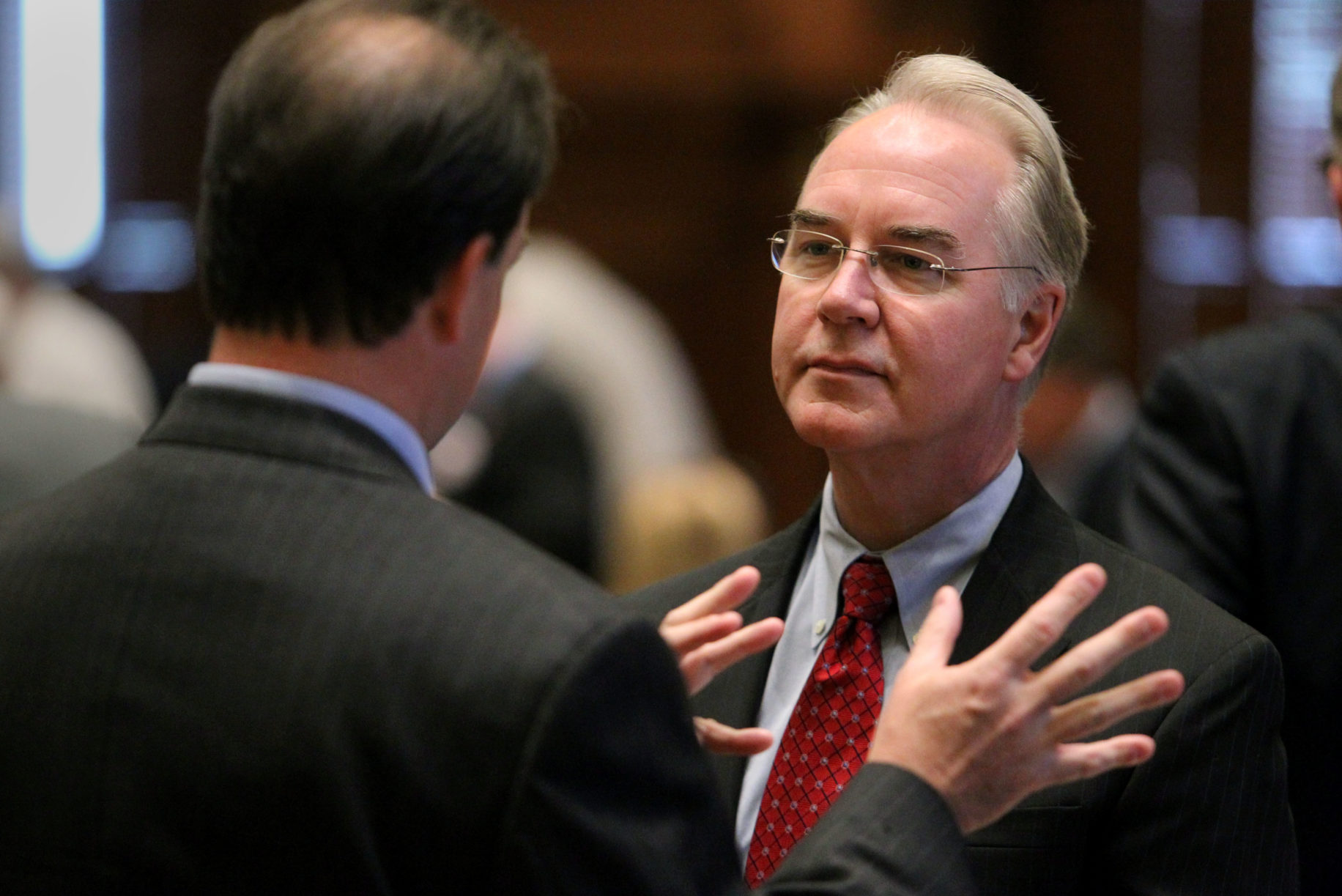 BY CHRISTINA JEWETT AND MARISA TAYLOR  |   As Cabinet nominee Tom Price faces a Senate confirmation hearing Tuesday, a newly released trove of documents sheds further light on how he interacted as a congressman with the Centers for Medicare and Medicaid, the massive agency he may soon oversee.

Letters provided by CMS after an open records request show that the Health and Human Services pick has repeatedly stepped up in favor of drug firms, device manufacturers and higher physician payments, leading some experts to question whether he would be a reliable advocate for the public’s health.

The documents reveal additional instances where Price, a doctor from Georgia, set aside his priority of budget discipline in favor of special medical interests, including by sending a letter endorsing a medical procedure that Medicare later decided not to pay for, pointing to weak evidence that it helped patients get better.

“He’s clearly shown in this case and in other ways allegiance to the corporate interest, but not to the patient interest,” said Diana Zuckerman, president of the National Center for Health Research, a nonpartisan think tank that has studied medical device safety.

Price aligned with pharmaceutical firms in one letter, criticizing a policy meant to steer doctors away from the costliest drugs. He also sided with physicians who balked at a move to cut their pay for epidural pain relief injections.

A spokesman for the Trump transition, Phillip Blando, said Price has “always brought a compassion and commitment” to caring for patients and his public service as a lawmaker.

“Any suggestion that his motivations for public service have been anything other than seeking to improve the lives of the American people is simply wrong,” Blando said in a statement.

On Wednesday, Democratic lawmakers pressed the Republican congressman on his investments and elicited few details on the congressman’s plans for replacing Obamacare during a four-hour Senate health committee hearing.

Pointed questions came from Sen. Patty Murray, D-Washington, who grilled Price about his investment in an Australian drug company, Innate Immunotherapeutics. Price bought stock cheaper than what was offered on the open market, according to a Kaiser Health News report cited in the hearing.

Newly released documents show that in August, Price signed a letter to Medicare criticizing the use of “step therapy” in the drug program for seniors. The policy encourages doctors to first prescribe low-cost, established drugs and determine if they’re working before going to newer, more expensive options. In the letter, Price and eight other lawmakers said the program should remain flexible enough that it does not “take prescribing power out of the hands of physicians.”

Julie Donohue, co-director of the University of Pittsburgh Center for Pharmaceutical Policy and Prescribing, said Medicare’s use of step therapy is one of the few tools it has to contain soaring drug costs.

“Unfortunately, unfettered choice of medicines … leads to higher drug spending and higher cost for taxpayers, so you have to strike the right balance,” Donohue said.

Another letter in 2013 would have helped major pharmaceutical firms by reducing the reports they must file on educational materials they hand out to doctors. Price and 22 other lawmakers wanted to relieve the companies from reporting what they spend giving doctors journal article reprints or textbook chapters. At the time, Medicare declined to make a change.

Dr. Adriane Fugh-Berman, a physician and Georgetown University professor who studies drug industry relations with doctors, said the disclosure is important since such materials handed out to doctors are often vetted and controlled by drug companies, and then are used as promotional materials by sales teams.

A proposal similar to the 2013 letter recently emerged as a flashpoint before the 21st Century Cures Act passed in December. Then, Sen. Charles Grassley threatened to hold up the bill over a provision exempting drug firms from reporting on the handouts, as well as another stream of funding, continuing education to doctors.

“With taxpayers and patients paying billions of dollars for prescription drugs and medical devices, and prices exploding, disclosure of company payments to doctors makes more sense than ever,” Grassley said in a November statement, spurring the provision to be dropped.

Another letter shows Price endorsing a medical procedure before it was proven to help patients.

In a 2012 letter, Price urged Medicare officials to assign a payment code for a new procedure meant to relieve a condition associated with lower back pain. Price’s letter notes that the procedure was pioneered by a California company called Vertos Medical that sells the device used to perform the spinal operation.

“We have spoken with providers unaffiliated with Vertos who … have confirmed that this is a significant therapy that we need to advance,” according to the letter signed by Price and Dr. Bill Cassidy, a Republican Louisiana senator who is also a physician.

Lobbying records show that Vertos spent $70,000 on lobbying in 2012, the same year Price and Cassidy sent the letter. Lobbying records do not show whether Vertos reached Price. Vertos and its lobbyist, Jeffrey J. Kimbell & Associates, did not respond to requests for comment.

The doctors’ request to Medicare, though, did not achieve the desired outcome. Medicare officials later examined research saying the procedure had helped patients, but issued a decision refusing to pay for it, citing “weak studies, questions about missing information, questions about adverse events and conflicts of interest.”

The Medicare decision says “the evidence does not support a conclusion of improved health outcomes for our Medicare beneficiaries.”

In 2014, Medicare said it would pay for the procedure only if it’s done as part of more rigorous studies, which so far have had favorable results.

Price waded in with the Congressional Doctors Caucus in early 2014 over another controversial medical procedure. He and seven other lawmakers signed a letter complaining about a Medicare pay cut to doctors who perform epidural pain-relief injections on patients’ spines.

The letter also came after researchers began to question whether the side-effects of the spinal injections — including nerve damage, paralysis and strokes — were worth the short-term pain relief benefit, according to a report in the journal Surgical Neurology International.

Medicare responded to lawmakers’ concerns over the proposed pay cut, saying it was the result of an analysis comparing doctor pay rates to the amount of time the services take to perform. Medicare ultimately reduced the scope of the pay cut, though, after heavy lobbying by pain physicians and lawmakers.

Murray and other Senate Democrats have called for a House ethics inquiry into Price. Public Citizen, a nonprofit government accountability group, also filed a complaint with the Securities and Exchange Commission.

“After this week’s hearing, I’m afraid we have more questions than answers about Congressman Price’s stock trades and the kind of information he had when they were made,” Murray told reporters Thursday. “I remain deeply disappointed that Republicans brushed aside these serious concerns and decided to hold his nomination hearing anyway.”

Lawmakers have recently called for an investigation into Price’s purchase of six pharmaceutical company stocks in March, weeks before he led a bipartisan effort to quash a policy change that would have hurt the companies’ bottom line. In last week’s hearing, Price said his stockbroker made the purchases without his knowledge.

This article was provided by Kaiser Health News where it was originally commissioned and published.