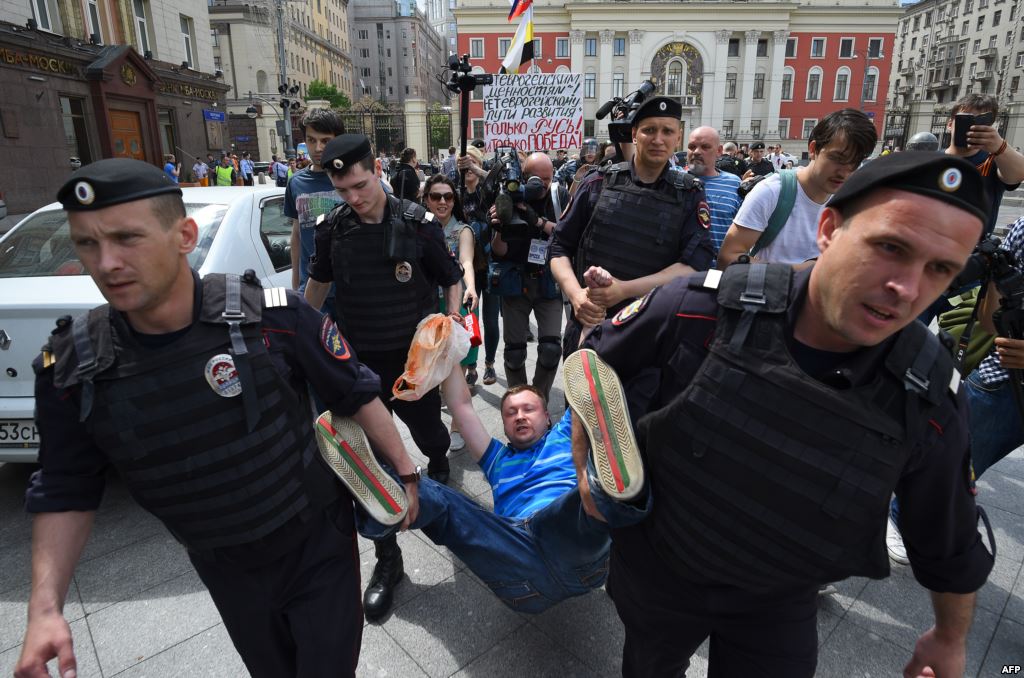 BY ROBERT WILLIAMS  |  Vasily Shpundet was at a protest in the Russian city of Obninsk against the country’s controversial proposal that sought to ban so-called gay propaganda to minors in 2013 when a lawyer with the country’s Orthodox Church encouraged nationalists and hundreds of other people to attack him and the handful of other LGBT rights advocates who were protesting.

He said local police questioned him about the attack before another group of people who identified themselves as members of the Moscow Criminal Investigation Department kidnapped him and brought him to a basement. Shpundet said the men took his passport, backpack and cell phone, beat him and threatened to take him to a nearby forest before releasing him five hours later.

“They tried to make me say that I had tried to murder someone,” he told The Pride LA during an interview in Plummer Park, speaking through an interpreter. “At the same time they assaulted me and abused me and called me queer.”

Shpundet told The Pride they decided to leave Russia after their home was broken into and they were attacked. He said those affiliated with the protests were similarly targeted.

“I worked with those people,” he said. “After all those things happened, we decided to move to the U.S.”

Shpundet, 25, and his boyfriend arrived in Los Angeles this past July and, after a long journey, are seeking asylum in the United States.

Shpundet’s story is not unlike that of  hundreds of other LGBT people who have fled Russia for their lives.  Many left because the reality of Putin’s Russia is that the anti-proaganda laws are not unlike a societal purge – a pogrom – and the laws there ultimately threatens every aspect of LGBT life.

Fearing extortion, loss of their biological and adopted children, their homes and their jobs, LGBT people in Russia and Eastern Europe are attempting to gain asylum throughout the free world.

West Hollywood is home to thousands of Russian immigrants (14% of all residents) and many LGBT Russians, like Shpundet, have moved here, hoping to find a peaceful life.

The city’s Social Services Division has created a guide to serve as a comprehensive list of local, no cost resources for LGBTQ+ immigrants and asylum seekers.

West Hollywood Mayor Lauren Meister says, “Now, more than ever, we must demonstrate our commitment to social services and support for the LGBT community and, especially, those who are most vulnerable.”

Available on the City’s website,”The Guide for LGBT Immigrants and Asylum” is a “lifeline of support” for immigrants living without HIV treatment, food, or shelter.

The guide, available in Russian, is a referral listing of  critical services provided by the non-profit sector, among them The Los Angeles LGBT Center, Bet Tzedek, and the Legal Aid Foundation of Los Angeles.

LGBT immigrants from Russia and Eastern Europe face especially difficult challenges due to language barriers, a lack of resources and supportive networks. Like all immigrants, they often face isolation, poverty and experience rates of HIV transmission that is higher than citizens.  Lacking medical care, they also face faster disease progression.

West Hollywood, in publishing the guide, hopes to steer some asylum seekers to non-profit organizations that can help with many of these issues.

West Hollywood’s history as a safe-haven for the LGBT community, and its leadership in promoting gay rights locally and internationally, gives the city impetus to help guide asylum seekers.

When Russian President Vladimir Putin implemented the country’s harsh anti-LGBT policies and the LGBT community instantly faced an increase in violence, harassment, and persecution, resulting in a 34% increase in applications for asylum.

As for Shpundet, he has nothing but gratitude for West Hollywood.  “Where would we be now without help?  We’d be hopeless. Or maybe we’d be dead.  We couldn’t get through this process without help.”