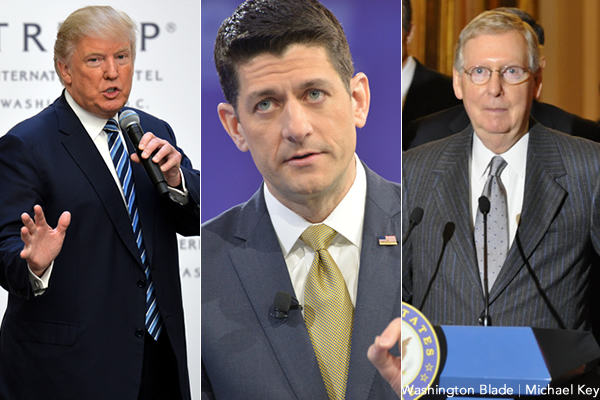 BY CHRIS JOHNSON  |  Amid persistent fears that a Donald Trump administration would roll back LGBT advances seen under President Obama, the protections that are most likely in jeopardy can be found in Obamacare.

A top campaign promise of President-elect Trump and Republicans in Congress — who will have unified control of the federal government — is to “repeal and replace” the Affordable Care Act. One provision in the law ensures that transgender people have access to transition-related care; another ensures that low-income people with HIV/AIDS can obtain life-saving medication.

Section 1557 of Obamacare prohibits health care providers and insurers from discriminating on the basis of gender. The Obama administration has issued a rule interpreting that provision to bar discrimination in health care against gender non-conforming and transgender people, including for the purposes of transition-related care and gender reassignment surgery.

Mara Keisling, executive director of the National Center for Transgender Equality, said she doesn’t think “anybody knows anything right now” about what the Republicans will do, but acknowledged it will be hard for them to ignore Obamacare.

“So we know the Affordable Care Act is going to be assaulted somehow,” Keisling said. “We don’t know if Section 1557 is, and it would just be a real shame if it was. It just basically says health care providers can’t discriminate on the basis of race, age, disability and sex.”

In the event Congress were to repeal Section 1557, Keisling said a “belt-and-suspenders” system remains in place that would help protect transgender people, including state insurance commission rulings, professional association rules and state non-discrimination laws under which health care or public accommodations is listed.

But Keisling also said Congress could render Section 1557 moot not just by repealing it, but refusing to fund the Department & Health Human Services and the Office of Civil Rights at a level that could enforce it.

“If they decide to starve civil rights enforcement processes and functions in the federal government like the Bush administration did, that hurts us,” Keisling said.

Laura Durso, senior director of LGBT research and communications at the Center for American Progress, said repeal of Section 1557 would have “devastating consequences” for many communities, but in particular transgender people, whom she said would “lose vital protections.”

“Without these civil rights protections, we could to go back to a time when science and compassion take a back seat to misinformation and ideology, and we must demand better for our transgender siblings,” Durso said.

Durso said prior to the Affordable Care Act, transgender people “overwhelmingly reported negative experiences with the health insurance market due to denials of coverage,” but after Obamacare — in part because of Section 1557 — the rate of insurance for low- and middle-income transgender people dropped from 59 percent in 2013 to 35 percent in 2014.

Obamacare also expanded Medicaid to cover individuals with incomes at less than 133 percent of the poverty level. After the U.S. Supreme Court in 2012 upheld the individual mandate in the Affordable Care Act, states could elect whether or not to take part in the expansion. Thirty-one states and D.C. elected to expand Medicaid.

According to an October report from the Kaiser Foundation, Medicaid is estimated to cover more than 40 percent of people with HIV in care. Additionally, Medicaid accounts for 30 percent of all federal spending on HIV care, and when combined with the states’ share of spending, is the second largest source of public financing for HIV care in the United States, the report says.

Carl Schmid, deputy executive director of the AIDS Institute, said many people with HIV/AIDS depend on Medicaid — both for drug and doctor care — because “a lot of people with HIV are very poor,” raising fears about how Trump might undo efforts to address the epidemic.

“We’re obviously very concerned about how he’s going to address HIV/AIDS issues — both domestically and globally — and then the Affordable Care Act is just so important for people living with HIV or at risk of HIV, and I don’t think they know the magnitude,” Schmid said. “And I think, hopefully, cooler, smarter heads will prevail as you get into the details.”

Schmid said the Affordable Care Act also is effective in addressing the HIV/AIDS epidemic because it covers preventive care, including HIV testing, with no patient cost-sharing.

One idea Republicans have proposed is changing Medicaid to a block-grant system in which the federal government would discontinue its open-ended commitment to help states cover costs in exchange for certain commitments and, instead, provide states with annual lump sums, freeing them up to run the program as they wish.

But Schmid said that would be bad for people with HIV/AIDS because some states, he said, want to eliminate the single tablet regime in favor of less costly individual components, which would require people with the disease to take more tablets per day.

“We’re concerned about the block-granting because we’re going to lose those protections they have in place at the federal level,” Schmid said.

In the event Congress rolled back Medicaid, Schmid said there would be more pressure on the Ryan White Care Act, which before Obamacare covered low-income people with HIV/AIDS, as “the payer of last resort.”

“Under the ACA and Medicaid expansion, Ryan White clients have been able to gain coverage under Medicaid for health care and medications, and Ryan White has been able to provide additional support services, like case management, transportation and food,” Schmid said. “If Medicaid was reduced, those clients would have to go back to reliance on the Ryan White Program.”

Both Section 1557 and the Medicaid expansion could be particularly vulnerable in the 115th Congress. A Senate Democratic leadership aide said both components of Obamacare can be undone through the reconciliation process, which would mean only 51 votes — not 60 — would be needed invoke cloture to move forward with repeal of the provisions.

Keisling, however, said her read of Section 1557 is that it would require 60 votes to undo, which likely means Congress would only get rid of it by repealing Obamacare in its entirety.

“I think if Section 1557 goes, the whole thing goes,” Keisling said. “It’s not the funding part of the bill, it’s just about how as we have this system that we’re trying to make better, it shouldn’t be a discriminatory system.”

With an estimated 20 million people enrolled in health insurance plans as a result of Obamacare and that number growing during the open enrollment, it remains to be seen whether Trump and Republicans will make good on their promise to undo the law.

U.S. House Speaker Paul Ryan (R-Wis.) was cagey during a news conference on Thursday when asked about plans to repeal Obamacare during the 115th Congress.

“It’s a great question,” Ryan said. “That’s one that we’re going to be dealing with all year long. This is — it’s too early to have, to know the answer to, how fast can Obamacare relief occur. What we’re focused on is how we get Obamacare repealed and what we replace it with, so that we can get that relief to the American families as fast as possible.”

David Popp, a spokesperson for Senate Majority Leader Mitch McConnell (R-Ky.), said he has no “announcements or updates on any legislative action for the 115th Congress” when asked by the Washington Blade about plans to repeal Obamacare.

During an interview last week on “60 Minutes,” Trump said he wants to keep some of the more popular components of Obamacare in place, such as the ban on discrimination based on pre-existing conditions and the ability of parents to keep their kids on a family plan until they reach age 26.

But Schmid said he doesn’t see how Trump could move forward with a pledge to eliminate the individual mandate for Americans to buy health insurance if he keeps the ban on discrimination based on pre-existing conditions.

“To do that, you really have to have the individual mandate,” Schmid said. “They go together, and I don’t think they realize that because the insurance companies don’t want just sick patients. They need everyone to make it work.”

President Obama during a news conference last week said Republicans who have made repeal of Obamacare the “Holy Grail” of the campaign will face difficult questions that may stymie them now that they have the opportunity to act on that goal.

“It’s one thing to characterize this thing as not working when it’s just an abstraction,” Obama said. “Now, suddenly, you’re in charge and you’re going to repeal it. OK, well, what happens to those 20 million people who have health insurance? Are you going to just kick them off and suddenly they don’t have health insurance? And in what ways are their lives better because of that?”

Katie Keith, a steering committee member of pro-LGBT Obamacare group Out2Enroll, said the current period of open enrollment presents an opportunity for LGBT people to enroll in plans and demonstrate support for the law.

“In particular, Section 1557 bans transgender exclusions in 2017 marketplace plans, which is an unprecedented new protection that will improve access to transition-related care,” Keith said. “That’s why Out2Enroll is all in to encourage trans people to enroll before the Dec. 15 deadline. If folks have been holding out on getting covered in the past, we get it, but we are encouraging everyone, especially trans people, to consider enrolling this year.”

Whatever the plans of Republicans and the Trump administration, Keisling said LGBT advocates are prepared to advocate to make the case the existing protections under Obamacare should remain in place.

“We all know we have to work to advocate harder than ever and meet with the new administration, advocate with Congress, advocate through professional medical and health care associations, and I think all of us, know that,” Keisling said.