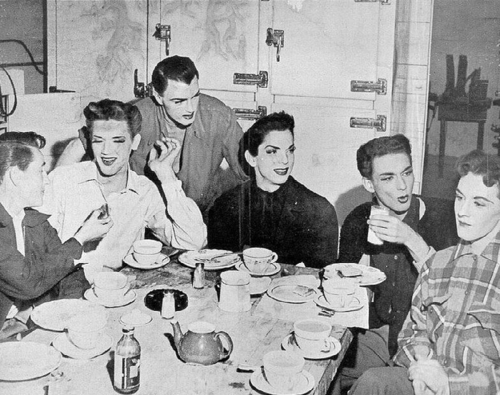 BY CHRISTIANA LILLY  |  It was a torrent of doughnuts and coffee that kicked off the LGBT-rights movement.

Sure, the Stonewall Riots of 1969 in New York City get all the glory, but ten years earlier there was a small, nearly forgotten uprising to which the movement’s roots can also be traced: Cooper Donuts in Los Angeles.

Like their New York counterparts, the Los Angeles Police Department often targeted LGBT people through entrapment, intimidation, and violence. Police specifically targeted trans people, arresting those whose perceived gender did not match their driver’s license. Several gay bars, in an attempt to remain inconspicuous and avoid police raids, banned or discouraged transgender people from entering. However, Cooper’s Donuts, which opened in 1959 in the Skid Row neighborhood, was welcoming to the transgender community. The shop served policemen during the day and, as the patrols dwindled in the evening, opened its doors to trans people and those barred from other establishments.

One evening, two police officers asked for ID cards from some customers at the shop — a typical way for them to harass LGBT people. Those who were picked out of the crowd, including John Rechy, an accomplished gay author who has written about the uprising, were “two hustlers, two queens and a young man just cruising.”

Something snapped in one of them; enough was enough. He objected to the car being packed with five people and fought back, leading the customers at the donut shop to flood into the streets, throwing coffee cups, trash, spoons, donuts, anything they could get their hands on.

“[The officers] fled into their car,” Rechy writes, “called backups and soon the street was bustling with disobedience. Gay people danced about the cars.”

The officers returned with reinforcements, Main Street was closed, and history was made. However, the importance of the Cooper’s Donuts uprising was not recognized until much later.

Mark Thompson, a social historian who lived in the same neighborhood as Rechy, writes of the event’s importance: “I would not describe it as a riot but more like an isolated patch of local social unrest that had lasting repercussions. I think less in its day, more as a lesson for us today. L.A. is such a huge, sprawling city (even back then) so what happened in one district probably did not register elsewhere — especially when issues of class and race are factored in.”

Not too much is known about the uprising at Cooper’s Donuts, and as time passes, fewer of the storytellers of the time are around to share their experiences. But it is important to remember that the fight for LGBT rights was not limited to one city and one event. The Cooper’s Donuts uprising, like the Compton Cafeteria riots, the Dewey’s sit-ins, and the Independence Hall protests, helped pave the way for Stonewall and for all the victories the community has seen since.

Christiana Lilly’s foray into journalism began at 11, when she put together a one-page gazette for classmates recounting field trips, announcing the lunch menu and other important news. Today, she’s a freelance journalist who covers a plethora of topics, including contributing regularly to South Florida Gay News. There, she covers health, religion, law and activism impacting the LGBT community. She has won multiple awards for her coverage, including stories on conversion therapy and youth homelessness. Christiana grew up in Asia as the daughter of a foreign service officer, and now calls Fort Lauderdale home with her fiancé.