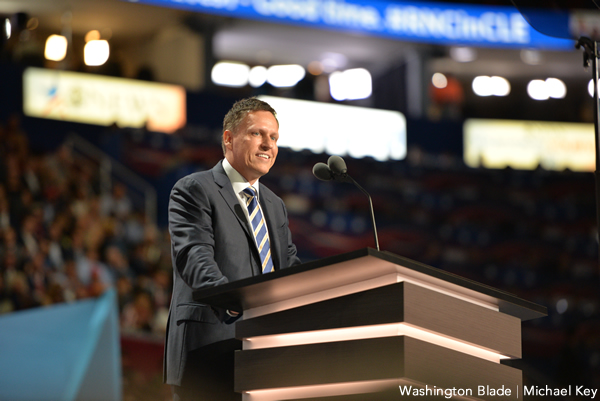 I can’t stop thinking about it.

It was a made for TV moment that was possibly the most carefully engineered and disingenuous audience manipulation of the entire convention.

Only seconds earlier Thiel had whipped the audience into a frenzy by trans-bashing and throwing LGBT rights under the ultimate antigay bandwagon.

“Fake culture wars only distract us,” he said referring in part to North Carolina’s recent anti-LGBT laws preventing the use of public bathrooms by transgender people.

“Who cares,” he shouted.

Applause was wild and then he delivered his declaration that he was a proud gay man….an oratorical strategy that worked to give the absurd impression that the G.O.P. was somehow pro-gay.

You saw that. I saw that. But most of America, not as educated about gay issues or aware of the extreme animus of the party’s official positions against the LGBT community, did not see it that way.  They saw the GOP applaud a gay man for saying he is a proud gay man.

You and I were offended by the bashing of transgender people but most of America did not understand what he was referring to.  They heard Thiel suggest that LGBT rights issues are, in the scheme of things, a less important matter, “a distraction.”

Thiel gave the party a pass on their hostility toward LGBT rights despite the party’s avowed determination to reverse all social and political gains LGBT people have made.  He spoke on the same stage on the same night as our communities most ardent haters, whose not so thinly veiled attacks against us were a constant theme of the entire convention.

The business man made a spiteful short sale on LGBT rights, his version of an ‘art of the deal.’

Thiel, a Facebook investor and board member who was recently revealed to be waging a secret legal battle against Gawker Media, funding a spate of lawsuits for others in retaliation for Gawker allegedly publishing articles about his then closeted sexual orientation, was the first openly gay person to speak at a Republican National Convention since 2000, when then-Rep. Jim Kolbe of Arizona addressed the gathering in Philadelphia.

Thiel is famous for his anti-multiculturalism beliefs, so his declaration of “WHO CARES”  is not all that surprising. Thiel co-authored with conservative David O. Sacks a treatise on the subject called “The Diversity Myth.”  In the name of “diversity,” the book argues, many leading academic and cultural institutions are working to silence dissent and stifle intellectual life. The book takes particular aim at the “politically correct” and what he calls a decline of higher education, using Stanford University as an example. “The Diversity Myth” argues that educational institutions are bogged down in a world of speech codes, “dumbed-down” admissions standards and curricula, campus witch hunts, and anti-Western zealotry that masquerades as legitimate scholarly inquiry.

Urvashi Vaid, the legendary LGBT advocate and pioneering author of “Virtual Equality: The Mainstreaming of Gay and Lesbian Liberation,” said on her Facebook page, “Peter Thiel is the new Roy Cohn.”

Republicans needed to put a smiley face on LGBT rights. They seem to have realized a need to diffuse the obvious political advantage the Democrats have gained as proponents of gay rights.  But since the party can’t possibly lose the political power of antigay forces they chose to craft a “love the sinner, hate the sin” message and found a Billionaire conservative gay man to deliver the message for them.

Thiel allowed Trump to deliver his milquetoast utterance of defense of “LG.BTQ” folks, though his words were a tired retread of his flawed terrorism theme:

“Only weeks ago, in Orlando, Florida, 49 wonderful Americans were savagely murdered by an Islamic terrorist. This time, the terrorist targeted LGBTQ community. No good, and we’re going to stop it. As your president, I will do everything in my power to protect our LGBTQ citizens from the violence and oppression of a hateful foreign ideology. Believe me,” said Trump.

His words were the first mention of LGBT or Q people in a Republican Convention acceptance speech, but they were short on standing up for the rights of LGBT people.  Trump stood against “hateful foreign” ideology while offering nothing to challenge the hateful ideology of his own party on American soil.

He did add “and I have to say as a Republican it is so nice to hear you cheering for what I just said. Thank you,” breathing a sigh of relief perhaps.

The National Review reported that “while a two-thirds majority of Republicans oppose the Supreme Court’s ruling in last summer’s Obergefell v. Hodges, there is absolutely no credible case to be made that Republicans as a whole have shown themselves indifferent to protecting LGBT citizens from terrorists or other physical harm.”

“For Trump to insert that last line is beyond demeaning to conservatives and Republicans, not to mention incredibly misleading to the rest of the country. Such a comment only reinforces the misimpression among left-leaning citizens, in particular LGBT people themselves, that Republicans couldn’t care less what happens to them. It perpetuates the myth that anyone opposed to recognizing same-sex marriage must be an irrational bigot who hates LGBT people.”

They don’t get it, not in the least.  That’s why Thiel’s willingness to sell short cuts so deeply.