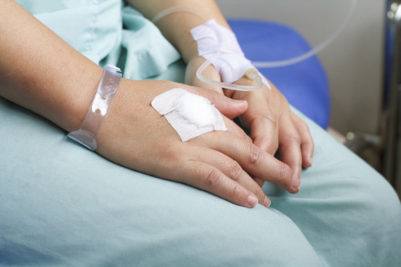 BY MICHELLE ANDREWS |  We’ve made great progress treating people who are infected with HIV, but if they get cancer they’re less likely to get the care they need, a recent study found.

Cancer treatment was defined as radiation, chemotherapy and/or surgery.

“To have made such great strides with treating HIV only to have them succumb to cancer is devastating,” said Dr. Gita Suneja, a radiation oncologist at the University of Utah’s Huntsman Cancer Institute in Salt Lake City and the lead author of the study. It was published online this month in the journal Cancer.

The study used the National Cancer Data Base to analyze treatment for adults younger than 65 who were diagnosed with any of the 10 most common cancers to affect HIV patients between 2003 and 2011. The study included 10,265 HIV-infected adults and 2.2 million without HIV.

The data base, which is sponsored by the American Cancer Society and the American College of Surgeons, captures roughly 70 percent of newly diagnosed cancer cases in the United States.

The study noted that more than a third of the patients with HIV had stage 4 cancer — cancer that has metastasized — when they were diagnosed, while only 19 percent of those without HIV did.

Improvements in antiretroviral therapy to treat HIV have helped reduce the incidence of cancers such as Kaposi sarcoma that are closely linked to AIDS, but rates for other cancers often associated with normal aging have increased among HIV patients. In addition, people with HIV have a higher incidence of some lifestyle-related cancers, such as lung cancer, which could be linked to higher rates of smoking. Cancer is now the second most common cause of death among HIV-infected people, behind AIDS-related causes.

HIV patients are more likely to be uninsured or underinsured, and lack of coverage can affect access to cancer care. But having insurance didn’t eliminate the problem: privately insured people with HIV were significantly more likely to be untreated for many cancers than were privately insured people without HIV, the study found.

“We know that people with Medicaid or who are uninsured receive subpar cancer treatment, and that’s a big public health issue,” said Suneja. “But even factoring that in, HIV-infected people are still less likely to receive cancer treatment. That means there are other drivers that we couldn’t measure in the study.”

For other cancers, “the oncologist may pause and ask, ‘Does the HIV infection mean they shouldn’t get standard cancer treatment?’” Suneja added.

By thepridela May 20, 2016
in HEALTH
Related Posts