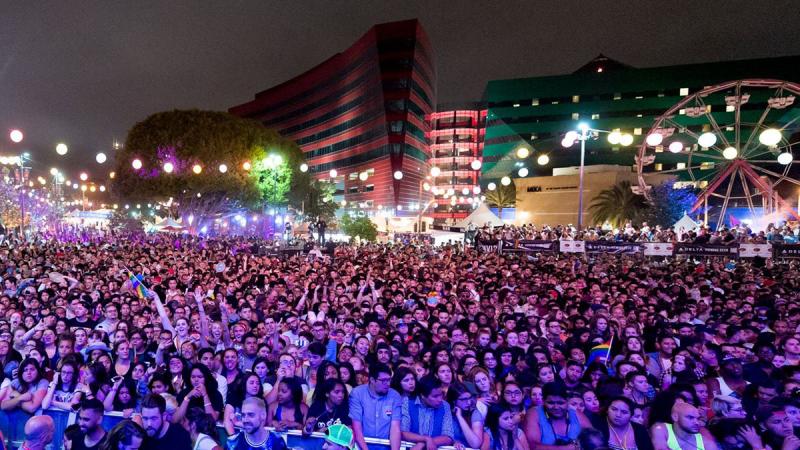 BY TROY MASTERS  |  West Hollywood’s L.A. Pride Music Festival & Parade aims to become the premiere annual music festival in Los Angeles.   If you were looking for Madonna or Liza Minnelli to perform, forget about it.  Just maybe they will be in the audience, jumping up and down to some great EDM :).

Formerly a more grassroots, LGBTQIX community based event that blended a civil rights rally with a variety of entertainment — including a heavy emphasis on current music — it has been transformed this year (some would say high-jacked) into a unabashedly youth oriented, high-energy, well-produced and, some say, very pricey commercial venture, so pricey that West Hollywood City Council saw the need for a ticket subsidy program.

Gone are the small mom and mom vendors, the cheap concessionaires and booths pushing local LGBT or community media.  This year the only vendors on site will be a handful of local non-profits and large booths for major sponsors like Delta Airlines.

Organizers are unabashedly targeting a millennial audience (the coveted 18-34 year old crowd) with a music festival that will send up a mixture of  pop, hip-hop, R&B and Latin artists and — hat tip to the organizers — you are not likely to find a better or more current roster of talent in one place, anywhere in the world.  Carly Rae Jepsen and Charli XCX and electronic dance music duo Krewella are the featured headline stars, chosen to kick of the rebranded LGBT (add “Music”) Festival.

As reported in The Pride LA, rebranding of the nearly 50 year old event has met with considerable controversy and some confusion, much to the surprise of organizers and the city.  Legacy and minority community members expressed rage that their history and efforts feel ignored and their contributions marginalized.

The  L.A. Pride and Music Festival will include the massive Pride Parade — more than 400,000 are expected to attend — on Sunday, the final day of the June 10-12 event.  The parade appears to be unchanged from previous years.

During the Music Festival, to be held in a high-security, enclosed area in the heart of West Hollywood at West Hollywood Park (along the west side of San Vicente Boulevard between Santa Monica Boulevard and Melrose Avenue) several stages will present dozens of big names.

To date there are four stages for various categories of performer, including one for top performers and a designated EDM area.

“This year we doubled down on talent and are excited to have such a strong lineup performing at the Music Festival,” Christopher Street West president Chris Classen said in a statement.  “Our Festival rivals other major music events around the country and offers a lineup you can’t find anywhere else among LGBTQ events, and at a fraction of the cost of other music festival tickets.”

General admission three-day passes are $55 until June 3, with VIP passes priced at $125 for the weekend. Single-day tickets are also available and start at $30.

As many as 250,000 people are expected to attend the Music festival. That number may be very conservative.

“The city has approved a $15,000 ticket subsidy which to cover the cost of 500 single-day tickets to the LA Pride Music Festival to be distributed to various local non-profit organizations and groups who provide programming to underserved community members,” said Joshua Schare, Public Information Officer for the City of West Hollywood.

Sample their music and buy your tickets here.