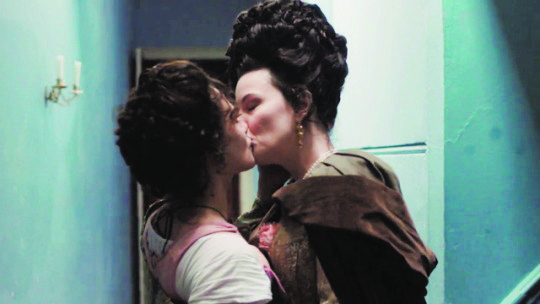 One of the more adventurous shows on TV brings a dramatic, cheeky second act.

“Harlots” isn’t the gayest show on TV. It’s not the most shocking, or the gaudiest, or even the campiest (though the constant presence of extreme cleavage makes it a high contender.) What’s amazing about “Harlots,” both the first and second season, is that it does what a lot of more talked-about, more prestigious shows used to do accidentally. It talks about female powerless in a male-dominated world without being preachy, dry or being at all about the male-dominated aspects of that world. Imagine if “The Sopranos” had just been about Carmella, Janice and the Mob Wives. Better yet, imagine if the “Real Housewives” franchise was not meant as comedy. In “Harlots,” we get to see the true desperation of people who will never feel free, and some who will quite literally never be free, of their dependence on men.

“Harlots” in its second season is still very much about women using men for money, and men using women for sex. What it dives into a bit more deeply this time around is the different definitions our characters have of “freedom.” One woman, a rare sex-hating harlot, tells her surrogate father, “We’re none of us free.” He in turn, a black man in a scathingly racist British society, turns her words back on her. “Who’s got you in chains?” Another conversation, between a young missionary and her girlfriend, a black woman who works the streets without belonging to a house or madam, reflects the same issue with definitions of freedom. The white missionary, who has saved her girlfriend from a term of indentured servitude in America, is ecstatic. Her girlfriend, however, is not. She has to serve as a slave to the man who sentenced her. When her girlfriend asks her to be grateful, she finds it a hard task. Freedom has always, and will always, mean different things to different people.

In this way, many of the conversations had between characters in “Harlots” feel extremely of the moment: phrases that might be bandied between social justice warriors on Twitter instead of upwardly mobile courtesans in 18th century England. But, miracle of miracles, this is achieved without any kind of self-congratulatory “aren’t things better now” approach. The writers of “Harlots” know that things are better, but just barely. And there’s still so much work to be done.

Among the other remarkable things about the show this season are the addition of complex, brutal and bizarre characters with vague motives, such as closeted lesbian noblewoman Liv Tyler, and the return of other strange, queer characters who live on the fringe of society. Like the best shows these days, “Harlots” finds ways not just to use its minority characters to make bland points about the current climate – people of color, queer folks, and intersectional characters – but to dive into the complex reality of their fight for survival. By trying to pull apart the pecking order (men of the upper class, men with money, women of the upper class, women with money, etc.) “Harlots” attempts a kind of complex, tricky world-building that better-funded and better-attended shows (“House of Cards,” et. al.) can’t quite pull together. In lesser hands, “Harlots” could have been a colorful catfight. As it is, it’s one of the most brilliant exposes of what holds people back in past and current societies. It’s never a lack of money, a lack of ambition or a lack of brutality and desire. It’s structural each and every time.

The structure of the law, of society, of the entire concept of manners, of trade, of absolutely everything, favors the white, the male, wealthy in that order. In a world where sex is the most valuable commercial asset and gender has a 50 percent chance of being your downfall, the possibilities of being screwed are endless, fascinating, and bitterly humorous.