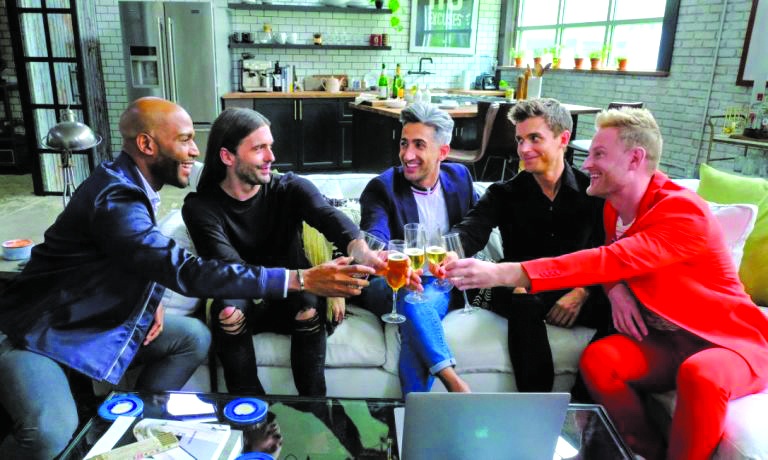 It doesn’t seem like “Queer Eye’s” first season happened all the way back in February. In fact, it’s difficult to remember a time when the new Fab Five weren’t in our lives and constantly on our screens. Since the premiere of the first season early this year, the queer quintet has made its presence ubiquitous through appearances on talk shows, YouTube channels, and magazine interviews. When it comes to pop culture, you have to work pretty hard to avoid the show’s pervasive presence. This, of course, is by design, as the hastily yet artfully produced second season of “Queer Eye” shows. When Netflix knows it has a good thing going, it responds in the only way it knows how: By doing it more.

That was the whole premise of the landmark streaming service to begin with: You want content? We’ll give you content. By releasing every episode of a series at once and promoting (if not totally creating) the idea of binge-watching, Netflix turned itself into an irresistible enabler of that television-as-addiction ethos that defines the way we approach not just TV, but all media today. We don’t just want something: We want it now, and we want as much of it as we can possibly stand before purging.

With “Queer Eye,” luckily, the formula lends itself to this. Though yes, the arc of each episode is utterly predictable, with tears being shed and lessons being learned within a tight 45 minutes, the twists and turns of each story are somewhat unique. “Queer Eye” paints its subjects with a slightly less broad brush than the original series, especially when it comes to season 2.  While season one’s subjects were largely hapless straight men (with one exception,) season two widens its scope by taking on a cis woman and a trans man as subjects for improvement. In both cases, the Fab Five approach their makeover task by first acknowledging the background hardships that each subject has dealt with. One woman is so busy taking care of other people in her life, including her entire church congregation, she can barely tend to herself. One man can barely get up off the couch to finish his college classes because he’s so crippled by the idea of failure. And one man, Skyler – whose episode starts with a cold open on real-time footage of his top surgery – is so focused on trying to be the man he’s meant to be that he can’t separate his own needs from the needs of his community. So the Fab Five have their work cut out for them, and each time, with little pushback from anyone or conflict of any kind, they admirably succeed.

So what’s wrong with this picture? Nothing, on the face of it. Only that it’s just a bit disingenuously wholesome, a bit repetitive, and a bit – both the formula and the saturation of the culture with the whole shtick – too easy to be trusted. Anyone with a high bullshit sensor is going to feel this instantly, and have to struggle all the way through the new season (often through tears) to come to terms with the feeling that sometimes bullshit, too, can be moving, real, and wonderful to engage with. Sometimes the regular bullshit of Christian doctrine, which is what the tenets of “Queer Eye” are built on – love thy neighbor as thyself, treat others as you would like to be treated, cast no stones etc. – is inexplicably, profoundly moving. This is hard to come to terms with, especially as the product of a culture that’s become a bit too smarmy, sassy, and knowing perhaps for its own good. So is a show that’s absolutely binge-worthy a problem if it gives you instant access to a full range of happy, sad, and confused emotions? Possibly. But if “Queer Eye” teaches us anything, it’s to not overthink what feels good. Maybe that’s the kind of lesson we need right now.