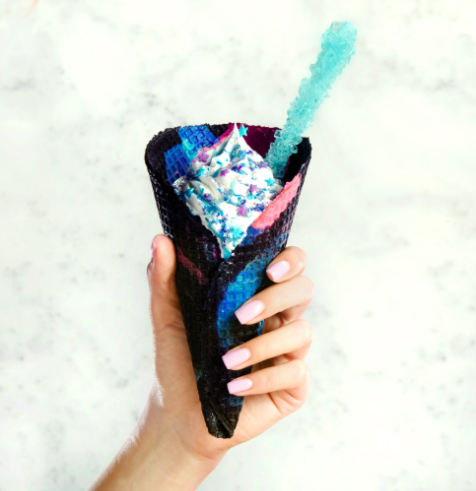 Anyone who loves eating ice cream by the pint and hates the self-loathing it inspires has probably already been introduced to Halo Top, the shockingly low-calorie ice cream brand that doesn’t taste gross, doesn’t pad their product with a ton of extra sugar and dubious ingredients, and isn’t crazy expensive. For many ice cream lovers, Halo Top seems too good to be true, especially considering you can (and are encouraged to) eat a whole pint in one sitting without racking up more than 300ish calories. But get this: Not only is the Halo Top brand legit: It’s an LGBTQ+ ally.

The brand was reached out to by Grindr’s online site Intomore.com last summer for advertising to tap into the queer market. Naturally, they struck a deal almost immediately. With a rainbow swirl flavor that seems made for Pride Week and a host of colorful cone options, Halo Top doesn’t feel like a pandering, Instagrammy brand. It feels like it’s just good enough to be true.

The catch? There’s nowhere in L.A. to go and get a cone or a sundae, unless you’re near Topanga. Until April 24, that is, when the brand’s second-ever brick-and-mortar location opens up at Westfield Mall in Century City. To celebrate, the brand is offering free cones and sundaes to the first 50 customers. One of these, off the “secret” sundae menu, is a pastel-goth version of a sundae that looks like a cross between something you’d find at Coachella and Yayoi Kusama’s Infinity rooms. It’s called the “Stardust Sundae,” and it’s about to take Instagram by storm. If you’re feeling a bit dubious about what a “stardust”-flavored cone entails, it’s a swirl of vanilla decked out with a rock candy stick, black waffle cone, and “edible holographic” vanilla topping. What could go wrong?

For Angelenos looking to make a day of it, Halo Top Westfield will also feature art displays, photo booths, and free treats.