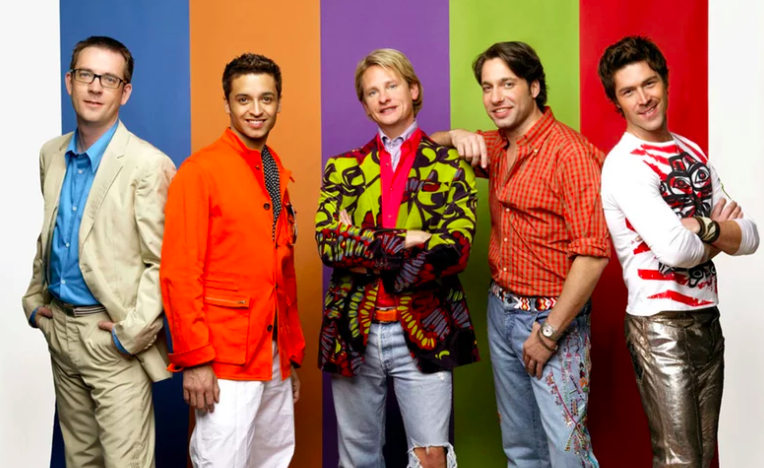 In 2003, when a group of five gay men were first starting to make their way into strangers’ homes to primp, prime, and improve their sordid heterosexual lives, it was a concept that the reality TV audiences shouldn’t quite have been ready for. With the Bush presidency in full swing and 9/11 a not-so-distant memory, Americans stood naively at the ready to accept the idea that straight men needed gay help when it came to grooming, loving, and existing.  Thus, “Queer Eye for the Straight Guy” was born into a receptive world. In televisual terms, it was a minor miracle.

By 2003, the success of shows like “Queer as Folk” and “The L Word”, still in early seasons, had paved the way for a kind of tolerance-based programming targeted as largely non-queer audiences. “Queer Eye for the Straight Guy,” a half-home improvement, half-self help reality show that promised the infiltration of “safe” queer stereotypes into the homes of traditionally homophobic-seeming straight men, was an unexpected sleeper hit, ushering in a new era of queer programming adored by the straight mainstream. After “Queer Eye” came “Drag Race,” “Orange is the New Black,” and “Transparent.” But as complicated as contemporary shows about gender and sexuality have become in the Internet age, has “wokeness” replaced the old, helpful stereotypes that helped the original “Queer Eye” preach universal tolerance with a treachly flourish?

The new “Queer Eye,” which premiered on Netflix on February 8, tries to answer this question. Not only the question of how we’ve changed since the Bush administration, but the question of whether or not that change has actually paved the way toward tolerance and empathy in Trump’s America. The long, “Queer Eye”-less stretch of the Obama administration doesn’t represent a 15-year moment of upward progress when it comes to gay rights. As we know too well, from 2003 to now we’ve seen a ton of progress, followed by many regressions to homophobic form, both on the part of the government and in the culture at large. In 2003, it wasn’t legal for LGBTQ+ people to get married in this country. Today, the threat of rolling back marriage rights and protections looms in the distance. In 2003, stuck in a war which many people still saw as justified, we were in a naïve, pre-Internet moment of feeling like all it took to erase homophobia was a few new laws, a liberal government, and a nationwide conversation.

The new “Queer Eye” shows just how naïve this thinking was no later than its third episode. In the first few minutes, the new, diverse Fab Five group, driving into a suburban Georgia town, are pulled over by a surly cop. With all five men scared of a Philando Castile repeat, the music goes silent, someone takes out their phone, and the driver, a black man, leaves the car trepidatiously.  When the pull over is revealed as a gag (“surprise! I called you out here to work your gay magic on my friend!”) the tension isn’t magically lifted. The moments before and the moments after the joke’s unfurling are a reminder of just how close Americans of a minority racial or sexual standing feel, at all times, to life-threatening violence. And this is supposed to be a makeover show.

The new show, as fun and light as it tries to be, vibrates with this kind of tension. Which isn’t strictly a bad thing. If the original “Queer Eye” was meant to be a distraction from the reality of the Bush administration, the new “Queer Eye” is through and through a product of Trump’s America, with its weekly spree shootings and the ever-lingering threat of the removal of basic protections for minority citizens of all kinds. While the men help quiet catastrophes of human beings (some straight, some not) get their lives together through grooming, fashion, culture, design, and food exploration, we get to hear stories of religious intolerance, police brutality, and lack of acceptance. And then the conversation turns right back around to throw pillows.

Which is kind of great, weird as that might seem. The new “Queer Eye,” in holding over the campy elements of the first show (picture a gay man entering your closet and screaming “gym shorts, gym shorts, gym shorts!” as he throws them exasperatedly into the air) works because it’s not an escape. It’s a reminder of how life, in the present day, can be brutal and terrible, but something worth living at the same time, with sparkle, with beauty, with tszuj. If “Queer Eye” is a show that helps hapless men not to fully give up on themselves, its philosophy might extend to this unique American moment: A moment in which many of us find ourselves wanting to give up on our failing country. But in 2018, there are other things to give up on, as “Queer Eye,” however roundaboutly, reminds us: Give up on the idea that equality and acceptance are easy, it says. But don’t give up on the noble pursuit of those things. And don’t give up on the place that, in this moment, shows every sign of having given up on you. Change your perspective, your wardrobe, and hope against hope that you can change someone’s mind. Otherwise, where the hell are we?