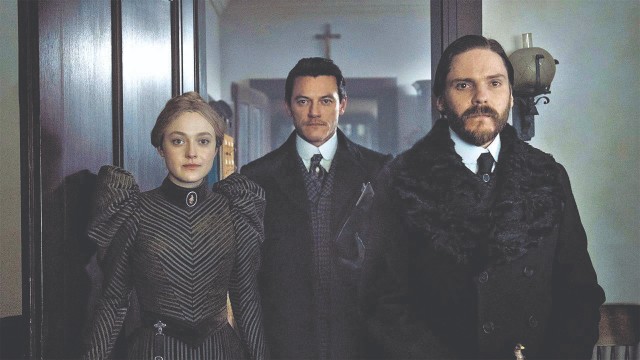 1890s New York – much like 1980s New York – was a time of high superstition, sexual panic, and extreme violence. It stunk of rats and bloated corpses, and was filled with corrupt cops, and city officials displaying a proud fondness for graft and ethnic stereotypes. Oh, and did we mention that women basically weren’t encouraged to go outdoors, ever?

And yet, even keeping all of this in mind, the idea of Old New York, with drunks strewn along the Bowery and newsboys shouting the latest gruesome headlines in the street, has its charms. Aside from the fact that the city was still trying to create an identity as a non-European, strictly American urban capital, New York in the late 1800s was a locale that replaced whatever it was lacking in national identity with a distinct visceral imprint created by sounds, smells, and shock. It was a time of courtly manners mixed with the repression of base inner urges that lead to quite a bit of lascivious crime and punishment. Which is why it’s a natural to want to make a TV show about a Victorian American society set in this dreamy locale: A society just on the brink of discovering something crucial about itself.

“The Alienist,” adapted from Caleb Carr’s 1994 novel of the same name, charts the movements of Dr. Kriezler and his companions as he tries to solve a vicious string of murders without the help of the corrupt local government. Kriezler’s occupation as the alienist of the title is a precursor to what we think of now as psychiatry. The difference is that, in the pre-Freudian atmosphere of 1896, mental health issues were still being linked to religious or moral failings rather than scientific aberration. Dr. Kriezler, however, is very forgiving in his view of human nature. That’s why, when faced with the gruesome spectacle of a disemboweled, disembodied young male corpse in a girl’s dress, eyes plucked out and throat cut “to the bone,” Kriezler is less concerned with what appears to everyone else to be the boy’s contradictory gender display. He wants to know who’s behind the crime. He knows the killer has killed before and will kill again – always young boys linked to a male prostitution ring. He knows that sexual violence is the killer’s calling card. Thus, enlisting the help of a young Theodore Roosevelt (then police commissioner,) his secretary, and a newspaper illustrator, he sets out to find the killer terrorizing lower Manhattan, even if it should lead him “into the depths of hell.”

All of which is great and fascinating, but a little murky. Like most ambitious, beautifully drawn (but less beautifully developed) period pieces, “The Alienist” throws its weight around in the obvious ways, creating extraordinary backdrops for the imagined atmosphere of 1890s New York, spending time lovingly trotting through the city in horse-drawn carriages, from which characters descend only to be enveloped in a hazy industrial fog. Like “Boardwalk Empire” before it, the visual worldbuilding takes us places that the plot, sadly, does not. We follow characters into their boudoirs, on trips to brothels, up the winding staircases of East Side tenement buildings, but we don’t – as of yet – follow them into the protected realm of emotion and desire. At least, not as of yet. With two episodes released, “The Alienist” is still finding its feet. And while the show is beautiful to look at, it would still be nice for a show that promises to be about the internal struggles of its characters – struggles with morality, violence, and sexual desire – to follow through on that promise at least in the first few episodes. Still, if you’re looking to be enveloped in a pleasant, yet gritty fantasy of Old New York, “The Alienist” has you covered, from the Bowery to Miracle Mile.