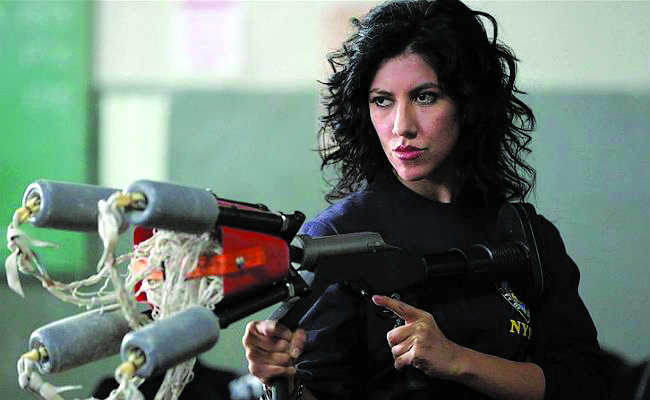 Even the most casual watcher of “Brooklyn Nine-Nine” could probably foresee a “plot twist” involving Rosa Diaz (Stephanie Beatriz) coming out. Or rather, specifically coming out as bisexual. After all, she is the show’s most original and complex character. She also consistently escapes falling into cliche or caricature as the show’s resident “female badass,” a role that could have, in different hands, felt reductive and boring.

But with Beatriz’s fairly recent declaration, “Yup,” on Twitter back in mid-2016 toAubrey Plaza’s sentiment, “I fall in love with girls and guys. I can’t help it,” Brooklyn Nine-Nine writers were bound to incorporate this element into her character on the show. When Beatriz herself pitched the idea to the writers, it was to the tune of expecting some form of sanitization of what it means to be a bisexual Latina. Mainly in that most TV shows on a mainstream cable network like Fox are already hesitant to throw out black and white sexual orientation classifications like “gay” as it is. Thus, the importance of this specific designation of bisexual cannot be underestimated.

Considering that, to date, the scant number of portrayals we have of bisexuals on TV mainly consists of a terrorist named Mandy on “24,” “The L Word’s” Alice Pieszecki, and Kevin Spacey’s version of Frank Underwood, the addition of Rosa to the mix is much needed, and appreciated. The involvement Beatriz had in developing this aspect of her character is evident in her interactions with both her co-workers and her parents, the latter of which are expectedly withholding of acceptance, Rosa’s mom noting, “no matter what you call yourself, you still like men. So you can still get married and have a child,” and her father insisting, “It’s just a phase.” And then, of course, there is her father’s insistence that there is no such thing as bisexual (reminiscent of “Sex and the City’s” Miranda Hobbes famous repartee: “It’s just a layover on the way to Gay Town”). But “Brooklyn Nine-Nine” is addressing in a very real way just what bisexual people are up against when it comes to being taken seriously.

With the television airwaves now welcoming the likes of Rosa Diaz and Ilana Wexler (Ilana Glazer) on Broad City, it seems a safer, larger space for bisexuals to feel comfortable and well-represented in the realm of pop culture is developing. And it’s long overdue.