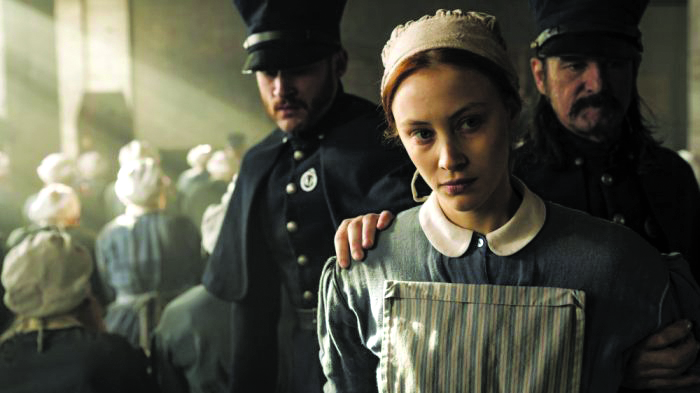 When this year’s Hulu adaptation of “The Handmaid’s Tale” burst on the scene, scooping up praise, cavalcades, and endless Emmy wins, it would have made sense for any producer with even the most tenuous relationship to a streaming service to pitch another Atwood story, but this time, you know, something a little more…narrative. Something maybe a bit less political and more, you know, lurid.

It’s no wonder that “Alias Grace,” the first of these to pass muster, more than adequately fits the bill.

In terms of true crime, “Grace” is as introspective and bizarre as it gets, and when it comes to its source material, the real-life acquittal of convicted murderer Grace Marks in the late 19th century, it’s pretty heady stuff. Even if Atwood hadn’t chosen to fictionalize the story of Marks in her 1996 novel, the story itself would still feel decidedly Atwoodian. Its focus on a woman who, both in control of her destiny and fully at the mercy of an unfair judicial system, ends up getting away with murder, is kind of radical. More than that, Grace accomplishes something even more criminal in her society’s eyes: She gets away with living a truly free life.

The conceit of the TV adaptation, written and directed primarily by the Canadian director Sarah Polley, (“Away From Her,” “Stories We Tell,”) is that we’re hearing the account of the brutal murder of Grace’s employer and his housekeeper consort from Grace’s presumably innocent point of view.

Society sees her as a murderess, and her presumed accomplice, a male servant, has already hanged for the crime. But powerful men and women want to see Grace walk free, so they’ve hired someone to do a crude type of psych evaluation on her to determine if she’s really “all there.”

Of course, she’s not, at least, not quite. Not the way Sarah Gadon plays her, with a brilliant void of emotionality and excess of personality. Her matter-of-fact speech, strange prudishness, and obsessive attention to needlepoint come across as fascinating to the young doctor charged with evaluating her, so much so that he gets crushed under the weight of countertransference. As for Grace, she barely encourages the attention she gets from men. In fact, the only interest she shows in any character, male or female, comes in early, when we’re introduced to her best friend Mary Whitney. Mary tragically dies due to a botched abortion, leaving Grace behind without an emotional life to speak of. After her death, Grace can only seem to think of revenge. Quietly, while working at needlepoint.

This, of course, is the long drawn-out metaphor of the piece. The meticulous work that women do each day, especially in a society that doesn’t value their lives, can add up to something dramatic, brutal, unforgettable.

In the first episode, Grace recalls always wondering why quilts were made out of such loud colors, calling attention to the bed in each room and making it the centerpiece. “Now I know,” she says, “it is a warning.” Dangerous things happen in beds. She saw her best friend, and possible love interest, die in one.

If there’s anything new that “Alias Grace” tells us, it’s in the subtle teasing out of this primary relationship. For a woman who, as the real Grace Marks was, brought over from Ireland to do menial labor when she was still a child, robbed of a mother early and brought up by an abusive father, the only chance she might have had to develop a true emotional life was through making a friend like Mary Whitney, and then losing her, as many women were lost in those days, to complications from pregnancy. This small, everyday tragedy in the context of the time was, for Grace, something of gigantic proportion, and something that had to be paid for, perhaps in blood. In “Alias Grace,” we’re given a way to connect the dots in the same way. By the end of the last episode, all the violence, the gore, the intensity of the central crimes, make a sort of sense. For Grace, murder is a kind of reparation.