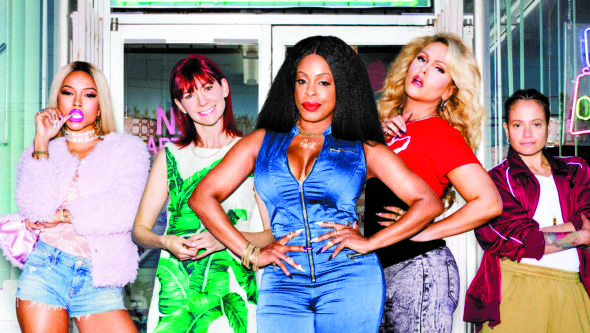 In a strip-mall nail salon in Manatee County, Florida, a group of women – money launderers, muscles, and ex-cons – find themselves caught up in the slightly more sinister world of the opioid trade. More specifically, the “pain clinics” that have started sprouting up in Central Florida are an almost direct result of the specific kind of Southern desperation and decay that the women find themselves mired in day after day, even as they aspire to decadence in their own lives after hours.

At the head of it all is Desna, the owner of the salon whose dreams involve not much more than a larger salon and a new house with a roof that doesn’t leak. To get it, she’ll have to play nice with a sinister bisexual mob boss named “Uncle Daddy” who whittles in his spare time.

Sound familiar? If it does, it’s only due to the more-than-faint resemblance the new TNT drama “Claws” bears to its campy-as-hell Southern predecessors. As in the complete works of Flannery O’Connor, Eudora Welty, and most pointedly Tennessee Williams, in whose plays a character with the moniker “Uncle Daddy” would hardly be amiss. But don’t make the mistake of getting caught up in “Claws”’ choice of location as an indicator of its type, or its quality. As Southern gothic tales go, “Claws” is a flashy, brilliant, update of the standard template.

Of course, that doesn’t mean it hasn’t been leaning on a few cliches to its point across in the first episodes of the season. Niecy Nash’s Desna has a mentally-challenged brother (Tennessee Williams had a mentally-challenged sister) she must support, providing that extra little bit of motivation for her dealings with the thugs in Uncle Daddy’s crew. Carrie Preston’s Polly is an ex-con who puts on a prom dress and tiara to go to the strip club after hours. And the character of Uncle Daddy himself, played by Dean Norris, trades on the actor’s name-making performance in “Breaking Bad,” – that earlier, harsher, druggier series from which the possibility for shows like “Claws” was first born – to give him that sense of desperate, do-anything violence that makes him seem more sinister than he’s written.

But no matter: “Claws,” as it stands, is made up of far more originality than borrowed material. The mostly New Orleans-shot show gives us Florida in a new light – a sort of playful, gently depraved one, colorful, exciting, and grim by turns. The high-camp aesthetic of the tough, down-and-out women of the salon is fresh in its glorification – even its glamorization. And the dazzling promise of a show led by a powerhouse female ensemble is something we haven’t seen in earnest since early seasons of “Orange is the New Black.” Except here, unlike the earlier show, we get to see these women thriving in the working world, and doing it in bodysuits, nine-inch-long talons, and stripper heels.

So does “Claws” have a shot at greatness? Time will tell. Our guess is that it won’t take even a full season for “Claws” to sink its talons in and make its mark.