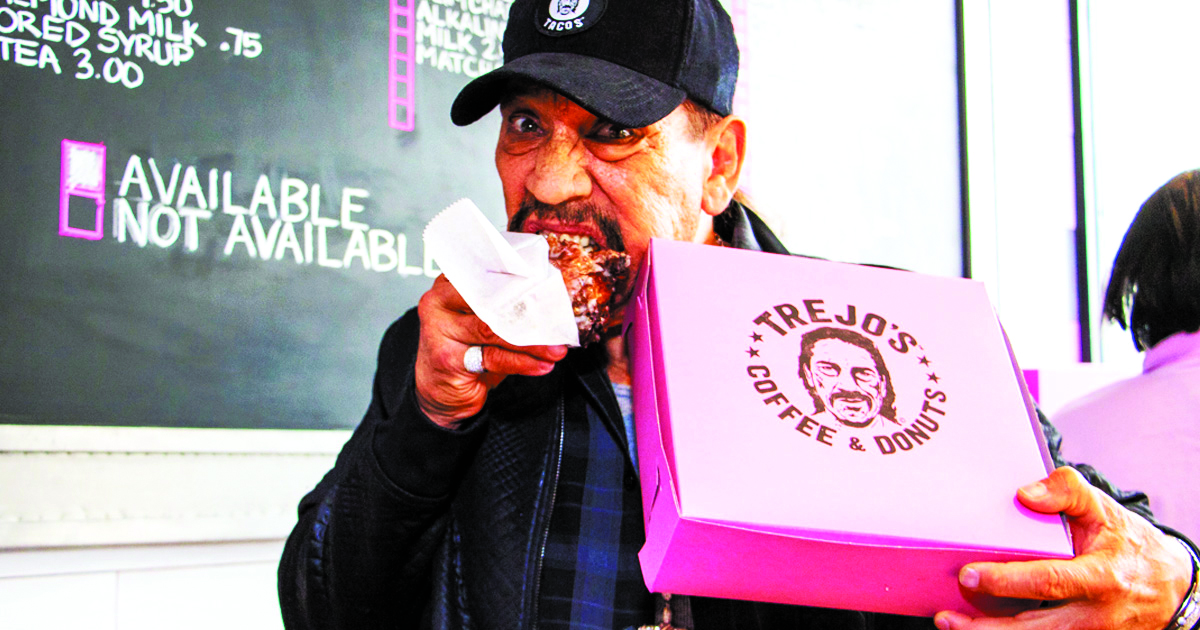 BY ANNETTE SEMERDJIAN| Character actor, Los Angeles native, and overall badass Danny Trejo has just opened the first of his namesake Trejo’s Coffee & Donuts shops on the corner of Highland Avenue and Santa Monica Boulevard. Better known as the one and only “Machete” from the film series of the same name, Trejo’s first taco joint on La Brea proved to be a success and expanded to a second Hollywood location, as well as a taco truck. Now, with the opening of his new donut shop, Trejo brings to L.A. a donut place that captures the culture and flavors of the city’s prominent Latino community.

The donut shop took over what used to be Donut Time, which made a cameo in the critically-acclaimed film “Tangerine.” The storefront does not disappoint, with a hot pink facade and bold letters announcing “TREJO’S COFFEE AND DONUTS” with a caricature of the well-known face on the side. The opening on May 16 sold out of donuts that same morning.

Trejo’s restaurants make sure to cater to different diets such as vegan and gluten-free. Trejo told Forbes, “When the food is good, people keep coming back. We started catering for vegans and vegetarians and people who want gluten-free. In the film industry, there will be nine of ten of you that all want to go dinner and inevitably people will want or need different things so, being in L.A., we took the lead from that.”

The menu combines taqueria favorites and donuts with flavors like horchata, tres leches, churro, and nachos (jalapeño and cheddar flavor). Other donut flavors that capture the essence of L.A. culture include O.G. and Low Rider. And if you’re going to pay three dollars for a donut, it should be the Machete donut at Trejo’s.

Trejo told Forbes that it was his mother’s dream to open a restaurant and, although he always talked about it, it only came to fruition in the past couple of years and is now a growing success. He also told the magazine that plans to expand the restaurants to Pasadena, Silver Lake and the University of Southern California in South L.A. What’s so great about Trejo’s businesses is that they keep the culture of L.A. going strong, fighting off the hipsterfication by selling donuts in the flavor ‘Gringo’ on the busy streets of Hollywood. Trejo and his business partner Jeff Georgino plan to take Trejo’s unique L.A. brand to a national level telling Forbes, “We’re growing naturally and every location seems to be doing well. I would love to see two Trejo’s Tacos in Las Vegas, two in San Antonio, Texas and two in New York.” Forbes has estimated the business could eventually turn into a $100 million venture – but did you expect any less from the man they call Machete?