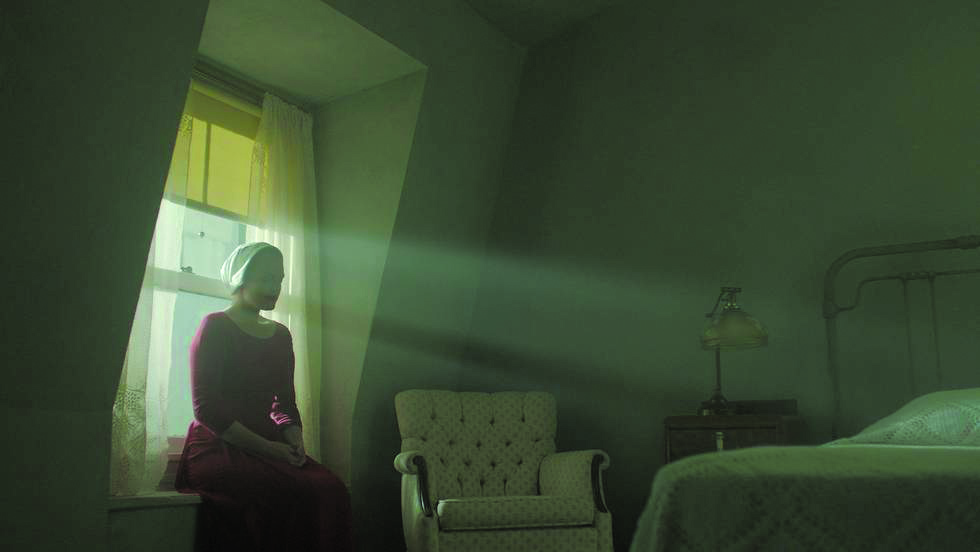 There’s no way to quantify just how scary it is to watch Elisabeth Moss in “The Handmaid’s Tale” – white bonnet, red cape and all – tell the story of the collapse of Western Civilization in muted voiceover. Hearing her talk about the days leading up to the end doesn’t feel like fiction. It feels like a summary of current events. It’s only a truly brilliant horror movie that can blur the lines between fiction and reality so effectively that a viewer becomes afraid to shut off the television for fear they’ll be shutting off life itself. And “The Handmaid’s Tale” is brilliant horror.

What’s impossibly, deeply chilling about Hulu’s new adaptation of Margaret Atwood’s novel is that you can be sure almost everyone who sees it will find it scary in the exact same way, for the exact same reasons. Atwood’s tale of a dystopian, anti-feminist future is, at heart, a story of the deep helplessness of good in the face of evil. To call it ‘prescient’ or ‘timely’ is an understatement. It’s paralyzing in the same numbing way of watching the doomsday clock tick closer to midnight.

To be fair, this probably wasn’t the showrunner’s intention. Bruce Miller’s adaptation the famously unfilmable book was underway long before a certain unexpected presidential hopeful announced his candidacy. Certainly, Trump’s election helped with marketing for “The Handmaid’s Tale,” but the prestige Hulu show didn’t exactly need help. As a streaming service, Hulu had been taking its time to produce an independent series that could match the output of its competitors in bravery, polish, and queer political relevance. Netflix had “Orange is the New Black” four years ago. Amazon had “Transparent.” Hulu knew they had to step up their game to compete in a world of increasingly feminist-oriented social justice stories. They also knew their own version had to be just as addictive.

And so it is. “The Handmaid’s Tale,” partly due to the sheer horror of its premise, partly because of the way it is cast, shot, cut, and sound-mixed, is impossible to turn off. Opting to release the first three episodes on the launch date instead of all (like Netflix) or one (like HBO), Hulu sucker-punched its audience into sitting through nearly three hours of pain, hopelessness, and a world breaking under the weight of fear.

Without drawing pointed conclusions or current-day parallels (they’ve sped up the timeline from Atwood’s novel so as to reference Tinder, Uber, and a host of other Internet-age delights) “The Handmaid’s Tale” uses Elisabeth Moss’s Offred (formerly June) to show us how a culture allows itself to revert to a violent, puritanical standard. When Moss is trapped and caught, separated from her husband and child and forced to be a “handmaiden” whose sole function is to bear children for the new high-ups in society, she’s put through a rigorous training, along with her fellow handmaids, told about how being gay is sinful (“gender-traitors,”) and how showing strength or independence as a woman is not allowed. Though Offred (all the female names are changed to reflect the fact that they are now a man’s property) tries to keep up appearances on the outside, we’re invited into her head to hear about the slow, desperate rebellion she and a few others are cooking up. Small things give her hope – like the fact that her “walking partner” Alexis Bledel is a lesbian rebel, and her “commander” (Joseph Fiennes) likes to play Scrabble.

It’s a thoroughly bizarre world that “The Handmaid’s Tale” inhabits, one that’s painful to observe – almost too painful to keep watching. But we do keep watching, just in case we see a glimpse of hope for own future reflected in the end.