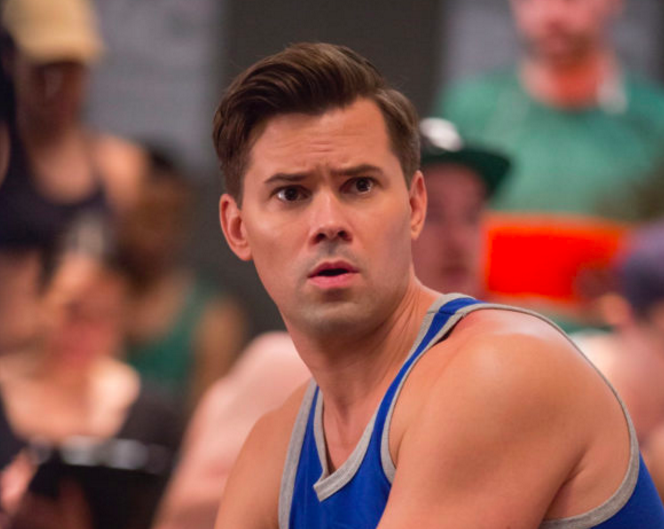 Ever since the first season of HBO’s Girls, “Book of Mormon” star Andrew Rannells has been consistently stealing our hearts with his portrayal of Elijah, a boastful, vulnerable gay man just trying to leave his dead-end retail job and make it on Broadway. In the midst of Hannah Horvath’s romantic and professional (and sometimes fully non-existent) problems, Elijah has remained constant: a beacon of hilarious light in a very whiny hipster landscape. Sunday’s episode finally gave us what we’ve been desperately wanting since Season 1: A moment alone with Elijah.

On Sunday’s episode “Bounce”, Elijah got back into the acting game by auditioning for a musical adaptation of White Men Can’t Jump, a humiliating experience replete with snotty producers, impossible choreography, and basket balls. Elijah tanks–and then, somehow, bounces back (get it?!) all while handling the mysterious reappearance of his ex, who dumped him rather unceremoniously last season for not being ambitious enough.

Focusing the episode primarily on Elijah was a move that inspired a wave of Internet speculation as to where Rannells’ character is about to go next. As Girls winds down, the fate of Elijah, though optimistic, remains uncertain. Rannells opened up to Queerty about the possibility of an Elijah spin-off (“I’d be up for it. I don’t think HBO would be up for it”) and dished to the AV Club about how his White Men audition was drawn from life:

“I told [Jenni Konner and Lena Dunham] the story of when I went for my callback [for Lysistrata Jones, a basketball-themed musical] and they were like, ’Okay, you’re going to have to dance, but don’t worry it’s not going to be a big deal,’” he recalled. “And then they did that very thing that we showed in the episode where they wheeled in a rack of basketballs. They were like, ’Okay, now let’s do it with a basketball.’ And I was like, ‘Are you fucking kidding me?’ Somehow miraculously I still got that job.”

We’re not surprised he did. HBO, take note: In the event of an Elijah spin-off, we’re 100% there.