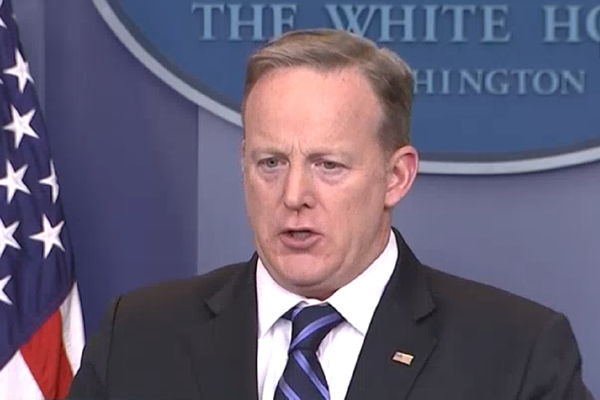 Much to the dismay of the LGBT advocates who sought to keep guidance barring discrimination against transgender kids in schools and assuring access to the restroom consistent with their gender identity, the Trump administration on Wednesday was set to revoke the guidance.

Although the final letter rescinding the guidance isn’t yet public, White House Press Secretary Sean Spicer said Wednesday during the daily press briefing it would come out that day, reiterating his words from earlier in the week the decision to withdraw the guidance is based on the president’s support for states’ rights.

“As far as the conclusion goes, I’ve made this clear and the president’s made it clear throughout the campaign that he’s a firm believer in states’ rights, and that certain issues like this are not best dealt with at the federal level,” Spicer said.

An undated draft copy of the letter published by MSNBC informs schools the Justice and Education Departments “are withdrawing the statements of policy and guidance” assuring protections for transgender students. Issued in May by those same departments during the Obama administration, the guidance bars schools from denying transgender kids access to the restroom consistent with their gender identity based on Title IX of the Education Amendments of 1972.

Citing “significant litigation” against the guidance, the draft letter cites a U.S. Fourth Circuit Court of Appeals ruling based on the guidance in favor of transgender student Gavin Grimm as well as a decision from U.S. District Judge Reed O’Connor enjoining enforcement of the guidance.

“In these circumstances, OCR and DOJ have decided to withdraw and rescind the above-referenced guidance documents in order to further consider the issues involved,” the draft letter says. “The Departments thus will not rely on the views expressed within them.”

The news comes just weeks after the White House declared in a statement Trump is “determined to protect the rights of all Americans, including the LGBTQ community.”

J. Bob Alotta, executive director of the Astraea Lesbian Foundation for Justice, condemned the decision to revoke the guidance as an attack on transgender students.

“These protections were put into place to ensure the safety of transgender students,” Alotta said. “Today’s decision actively harms the people who are most vulnerable to violence and the administration should immediately reverse course. Discrimination doesn’t belong in our schools or in our society. Everyone should have the freedom to express their gender identity without fear, retribution or risk of violence.”

Major media outlets reported the process leading to the revocation of the guidance was a source of contention. The Washington Post reported the transgender guidance was rescinded over the objections of newly confirmed Education Secretary Betsy DeVos. The Washington Blade has placed a call to the Education Department to verify those objections and determine who overruled her in the decision to overturn the guidance.

According to The New York Times, a fight erupted in the Trump administration over the letter between DeVos and U.S. Attorney General Jeff Sessions, who reportedly pressed the education secretary sign off on the change because he couldn’t go forward without her consent. The order had to come from both the Justice and Education Departments.

Trump sided with Sessions over DeVos, the New York Times reported, and faced with the choice of either resigning or defying the president, DeVos agreed to go along. The order was expected Wednesday, but held up, the Times reported, because the two Cabinet members disputed the final language.

White House Press Secretary Sean Spicer, however, denied there was significant contention among members of the Trump administration, insisting there was “no daylight” between DeVos and Sessions on rescinding the guidance.

“I think where you might be hearing something is more on the timing of stuff,” Spicer said. “The conclusions every person in the administration has agreed upon. There’s no daylight between anybody, between the president, between any of the secretaries.”

The reported view of Sessions in favor of rescinding the guidance is consistent with recent actions from the Justice Department in litigation filed against the guidance by Texas Attorney General Ken Paxton on behalf of 12 states. As a result of the litigation, U.S. District Judge Reed O’Connor issued a preliminary injunction barring the administration from enforcing the guidance nationwide.

Although the Justice Department under the Obama administration filed an appeal with the U.S. Fifth Circuit Court of Appeals seeking along with a request to limit the scope of the injunction to the 12 plaintiff states, a legal brief under Sessions withdraws that second request and declares the Trump administration is “currently considering how best to proceed in this appeal.”

Denying the timing of revoking the guidance means it’s a priority for the president, Spicer said the decision is based on the Gloucester County Schools v. G.G. case pending before the Supreme Court and “we have to decide whether or not to issue guidance to the court.” Arguments are set for March 28.

Explaining the decision to reverse course, Spicer said a review from the Education and Justice Departments under Trump identified “areas of concern,” such as the interpretation of Title IX to apply to transgender students.

“And so, it’s incumbent upon us to actually follow the law and recognize that Title IX never talked about this; it was an act of 1972,” Spicer said. “There was no discussion of this back then, and to assume certain elements of the law were thought of back then…would be completely preposterous.”

Despite Spicer’s words, a long body of case law — including a determination from the U.S. Equal Employment Opportunity Commission in 2012 and rulings from federal appeals courts as far back as 2000 — have determined the prohibition on sex discrimination in federal civil rights laws like Title IX apply to transgender people. The 1989 U.S. Supreme Court case Price Waterhouse v. Hopkins, which found the law covers not just discrimination on the basis of sex, but also sex stereotyping, formed the basis for those decisions.

Gary McCaleb, senior counsel with Alliance Defending Freedom, was among those cheering Trump for following up on his campaign promise to rescind the guidance.

“The privacy, safety, and dignity of young students should be the first concern of every local school official across America,” McCaleb said. “The Obama administration radically distorted a federal law that was meant to equalize educational opportunities for women and then forced local officials to intermingle boys and girls within students’ private facilities like locker rooms, hotel rooms on school trips, and restrooms. The Trump administration would be right to return to the rule of law by rescinding the Obama administration’s misleading guidance.”

The action comes despite calls from transgender advocates to keep the policy in place. On Tuesday, the Human Rights Campaign promoted a letter to Trump signed by more than 1,000 parents of transgender children calling on him to preserve the guidance.

“Like all parents, all we want is for our children to be healthy, safe, and loved,” the letter says. “No young person should wake up in the morning fearful of the school day ahead. When this guidance was issued last year, it provided our families — and other families like our own across the country — with the knowledge and security that our government was determined to protect our children from bullying and discrimination. Please do not take that away from us.”

In the 2015 U.S. Transgender Survey conducted by the National Center for Transgender Equality, more than three-quarters of those who were out or perceived as transgender at some point in kindergarten through high school experienced at that time some from of mistreatment, such as being verbally harassed, prohibited from dressing according to their gender identity, disciplined more harshly, or physically or sexually assaulted.

The survey doesn’t look specifically at the degree to which transgender students were barred from the restroom or locker room consistent with their gender identity. However, the survey found 59 percent of respondents reported in the past year they had avoided using a restroom, such as in public, at work, or at school, because they were afraid of confrontations.

Nearly one-third of the sample avoided drinking or eating so they wouldn’t have to use the restroom, and eight percent reported having a urinary tract infection or kidney-related medical problem as a result of avoiding restrooms.

Chad Griffin, president of the Human Rights Campaign, lambasted Trump for the decision to revoke the guidance in a statement and said it would only serve to harm transgender youth.

“What could possibly motivate a blind and cruel attack on young children like this?” Griffin said. “These transgender students simply want to go to school in the morning without fear of discrimination or harassment. The consequences of this decision will no doubt be heartbreaking. This isn’t a ‘states rights’ issue, it’s a civil rights issue. Children deserve protection from bullying no matter what state they live in. Period.”

Even though the guidance is rescinded, transgender advocates insist transgender students can still sue on their own if they feel they’ve experienced discrimination in schools under the provision of Title IX barring discrimination of the basis of sex. Because of the order from O’Connor, the guidance wasn’t an option for relief anyway.

But the plans could have an impact on pending litigation before the U.S. Supreme Court in which Gavin Grimm, a transgender student in Virginia, is suing his Gloucester County high school to use the restroom consistent with his gender identity. The court accepted the case to evaluate whether courts should defer to the guidance, a point that now seems moot, as well as whether Title IX prohibits schools from barring students from using the restroom consistent with their gender identity.

— From The Washington Blade via the National Gay Media Association