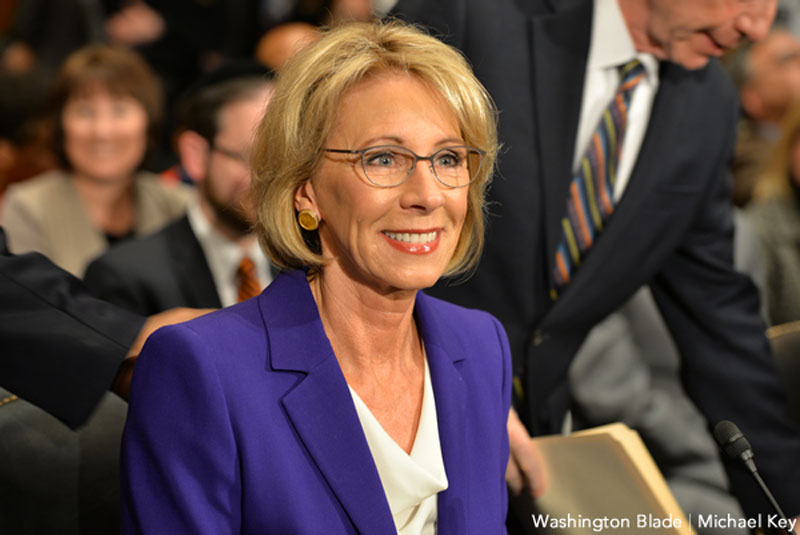 Despite efforts from Senate Democrats and LGBT advocates to block the confirmation of Betsy Devos as education secretary, the U.S. Senate narrowly confirmed on Tuesday President Trump’s pick to the head the Department of Education with no margin for dissent.

As expected, Sens. Lisa Murkowski (R-Alaska) and Susan Collins (R-Maine) dissented from the Republican ranks to vote “no” on DeVos. The entire Democratic caucus voted against her, including many spoke throughout the night prior to the confirmation vote.

Forming an alliance with Democrats and teachers unions who objected to DeVos over her longtime support for school vouchers, LGBT advocates opposed DeVos based chiefly on major donations from her family’s foundations to anti-LGBT groups, including Focus on the Family, the Family Research Council and the National Organization for Marriage. These groups support widely discredited “ex-gay” conversion therapy.

David Stacy, vice president of government affairs for the Human Rights Campaign, said his organization is “disappointed” with the confirmation and will be on the watch if the Education Department take actions to rescind LGBT rights.

“She is now charged with ensuring that LGBTQ students around the country are able to go to school in a safe environment where they can learn without compromising who they are,” Stacy said. “We hope our substantial concerns about her commitment to maintaining and advancing protections for LGBTQ students are disproven by her actions. But, if instead she moves to roll back legal protections or fails to enforcement them, we will fight every step of the way to ensure LGBTQ students are safe and respected in their schools.”

Among the Democrats on the Senate floor Monday criticizing DeVos was Sen. Patrick Leahy (D-Vt.), who expressed concern about the DeVos family’s ties to anti-LGBT organizations.

“Mrs. DeVos and her family have contributed to anti-LGBT causes and anti-women’s health efforts, which are in direct conflict to the one who is supposed to lead the Department of Education,” Leahy said. “How can a nominee disagree with the mission of the Department of Education and be fit to oversee that agency and promote the civil rights of schools and college campuses?”

During her confirmation hearing, DeVos rejected anti-LGBT views, saying she’s “never supported” conversion therapy and the anti-LGBT donations were from her family, not her or her husband. (According to the American Federation of Teachers, a foundation run by DeVos and her husband contributed $100,000 to the Institute for Marriage and Public Policy, which opposed same-sex marriage.)

However, she stumbled over other questions on education policy, said localities, not federal law, should govern policy for disabled students and was ridiculed for suggesting guns may be necessary in school to defend them from grizzly bear attacks.

Sen. Al Franken (D-Minn.) said DeVos wasn’t being truthful during her confirmation hearing when she said she took no part in the donation from her mother’s foundation to Focus on the Family.

“Asked about a family foundation that has donated millions of dollars to an organization promoting conversion therapy for LGBT youth, she claimed she had no involvement, which is ridiculous,” DeVos said. “Even if Mrs. DeVos’ own role as vice president of that foundation was a 13-year clerical error, as she now claims, she herself has donated approximately $75,000 to support that anti-LGBT organization’s work.”

Sen. Tammy Baldwin (D-Wis.), the only out lesbian in Congress who declared her opposition to DeVos before the confirmation vote, said on the floor she’s “troubled” by the DeVos family’s contributions to anti-LGBT organizations.

“While she told me and several of my colleagues at her hearing that she believes all students should be treated equally, I really remain concerned about how this long history of support for these anti-LGBTQ organizations will influence a department which, over the last 8 years, has shown some tremendous leadership in supporting LGBTQ students and parents in the education system,” Baldwin said.”

At the helm of the Education Department, DeVos could rescind guidance from the Obama administration that interprets federal law to prohibit schools from discriminating against transgender students or denying them access to the restroom consistent with their gender identity. On the campaign trail, Trump said he’d rescind the guidance, which is currently facing legal challenges in court from conservative states.

Sen. Cory Booker (D-N.J.) narrated the story of Wendy Walsh, a mother of a gay teen named Seth who hung himself after enduring anti-gay bullying at school. After Walsh filed a complaint with the Office of Civil Rights at the Department of Education, the school was forced its policies to prohibit anti-gay harassment, Booker said.

“Given the fears and concerns that have been expressed, I would have hoped she would have spoken directly to the work of the Office for Civil Rights to protect lesbian, gay, bisexual, and transgender teens who are factually experiencing some of the highest levels of hate crimes and violence and bullying of any children in America; that she would have made some affirmation that she would be a champion for their equality, for their dignity, and the Office for Civil Rights would continue its needed work, but she didn’t,” Booker said.

Despite opposition from LGBT advocacy groups, DeVos has expressed support for LGBT people in the past. As former chair of the Michigan Republican Party, DeVos denounced publicly anti-gay rhetoric from Dave Agema, a fellow Michigan Republican and member of the Republican National Committee. A recent article in The New York Times revealed she aided a gay friend and his partner in adopting a child, attended a same-sex wedding and made accommodations for a transgender women to use the woman’s restroom a Michigan Republican Party call center.

Log Cabin Republicans stood out from other LGBT advocates during DeVos’ confirmation process and supported the nominee based on this support for LGBT people.

Gregory Angelo, president of Log Cabin Republicans, said upon confirmation he’s “encouraged by her confirmation and looks forward to the fresh perspective she will bring to the Department of Education.”