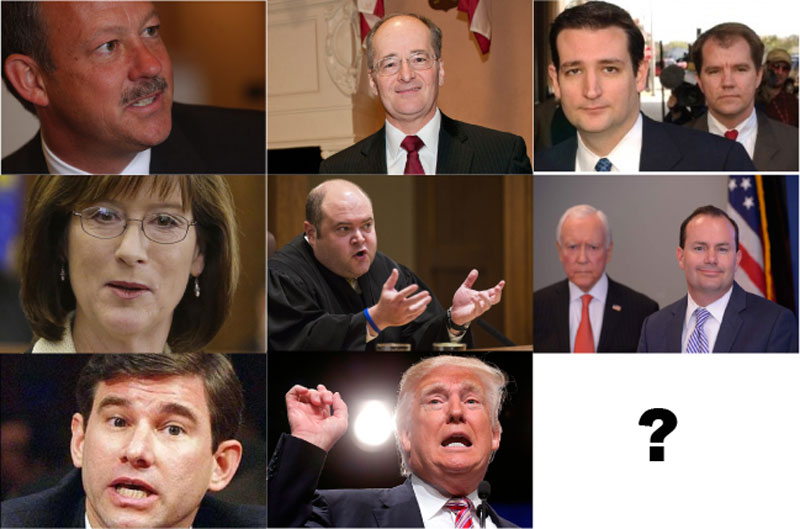 President-elect Donald Trump said during his first press conference since winning the election, on Jan. 11, said “we’ve met” with numerous candidates for his nominee to the Supreme Court. He went on to say he expected to make that decision within the first two weeks of his presidency.

During the second debate with Hillary Clinton, Trump said he admired the late Supreme Court Justice Antonin Scalia, who wrote an explosive and memorable dissent to the Obergefell v. Hodges which made same-sex marriage the law of the land, and said he wished to appoint judges “in the mold” of Scalia.

The Human Rights Campaign made a video quoting Scalia’s anti-gay statements, such as the one in his dissenting opinion on Lawrence v. Texas.

Trump said he is working off a list of 21 names he made public during the campaign. He released his second, expanded list of potential nominees in September, which included judges so far to the right that it finally brought Sen. Ted Cruz around, as he cited the list in his explanation of why he was finally supporting his onetime political arch nemesis. A man he once called “a pathological liar.”

Here are the most anti-LGBTQ of those nominees, all of whom have records that suggest they sit on the right side of the political spectrum.

Sen. Mike Lee is friends with Cruz, and his inclusion in Trump’s expanded list was particularly important to him.

Lee, like his friend, stands firmly in opposition to LGBTQ rights. He is the lead sponsor of the First Amendment Defense Act, which would anyone citing a strongly held religious belief to discriminate against the LGBTQ community in business, healthcare, housing and employment.

Trump pledged his support for FADA on his website in September.

Lee also backed legislation in 2014 called the State Marriage Defense Act. It would have allowed states decide which marriages they would recognize, as well as dictate to the federal government which of their state’s marriages they should recognize.

Judge William Pryor wrote in a 2003 legal brief arguing for upholding a Texas anti-sodomy law, which made consensual adult gay sex illegal, comparing it to “polygamy, incest, pedophilia, prostitution, and adultery. He added that gay people’s rights are not covered by the Constitution.

“This Court [the Supreme Court] has never recognized a fundamental right to engage in sexual activity outside of monogamous heterosexual marriage, let alone to engage in homosexual sodomy,” he added. “Such a right would be antithetical to the ‘traditional relation of the family’ that is ‘as old and as fundamental as our entire civilization.”

Lambda Legal, in 2005, while writing in opposition to his nomination to the U.S. Court of Appeals for the Eleventh Circuit, called him “the most demonstrably antigay judicial nominee in recent memory.”

Pryor has also drawn criticism from some activists on the right. In 2011, he signed on to an 11th Circuit opinion by liberal Judge Rosemary Barkett upholding a sex-discrimination complaint filed by a transgender state employee in Georgia. The worker was hired as a man but was fired after returning as a woman. In a 3-0 decision in Glenn vs. Brumby, the 11th Circuit concluded it is unconstitutional “sex-based discrimination” to fire a state employee “because of his or her gender nonconformity.”

Texas Supreme Court Justice Don Willet has shown his lack of support for same-sex marriage by dissenting in a case allowing two women, one with ovarian cancer, to marry before the ban on such unions was struck down.

Additionally, Willet dissented from the court’s decision not to take up a case concerning the validity of a same-sex divorce.

Willet has been endorsed by the likes of Focus on the Family Founder James Dobson and David Barton, both of whom advocate against LGBTQ rights.

Judge Diane Sykes has supported allowing student groups to discriminate against gay, lesbian and bisexual students, arguing in a case involving the Christian Legal Society at Southern Illinois University’s law school that they did not discriminate by keeping such individuals out because their decision was based on conduct and not orientation.

Justice David Stras ruled in favor of allowing an amendment opposing same-sex marriage to keep its original name “Recognition of Marriage Solely Between One Man and One Woman,” after Secretary of State Mark Ritchie selected “Limiting the Status of Marriage to Opposite Sex Couples.” It was thought the new name would make the amendment less likely to pass, which it failed to do in the end anyway. The following year the state passed a law legalizing same-sex marriage.

“Should we let three judges in Hawaii decide to redefine marriage, not only for the people of Hawaii, but for the rest of the country as well? I really can’t imagine how anyone could, in good conscience, oppose the proposition that the states should be able to deny the status of marriage to same-sex unions,” Canady said.

Timothy Tymkovich, chief judge of the U.S. Court of Appeals for the 10th Circuit

As the solicitor general of Colorado, Tymkovich defended Amendment 2, known as the Colorado No Protected Status for Sexual Orientation, before the U.S. Supreme Court. It prohibited cities and counties from giving protected status to citizens based on sexual orientation.

While it was initially approved, it was struck down in Romer v. Evans.