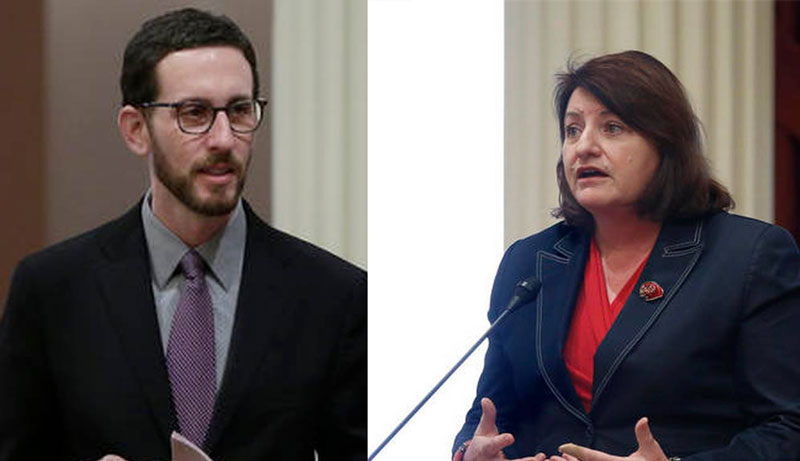 BY TROY MASTERS  |  While gender politics evokes outrage among some of the nation’s Republican lawmakers and among many Trump cabinet appointees, California is embracing a new era of acceptance and understanding, introducing the nation’s first bill that creates a third gender option on official state documents such as drivers licenses, state IDs, death and birth certificates…and, yes, marriage licenses.

The Gender Recognition Act of 2017 adds a “non-binary” option and simplifies the process for transgender people to make changes to state documents — changes that still require a court appearance and a sworn statement from a physician certifying that they received medical treatment during their transition.

Under the proposed changes, California would no longer require a doctor’s sign-off for such changes, and would require court appearances only if a petition were challenged. It would allow people under 18 to apply to update the gender on their birth certificate.

The bill, Senate Bill 179, was introduced by Sen. Toni Atkins, D-San Diego, who also sponsored a bill Gov. Jerry Brown signed into law in 2013 allowing transgender people to change their names and gender designations without a court order.

The new bill will make a profound difference in the lives of those who don’t identify as a male or female.

“I can’t tell you how uncomfortable I am in my own skin,” says J. Harris.  “I have never identified as a man.  I am not a woman. I have too many options and none but I can not live honestly. This will help.”

Advocates praised the bill, saying it sends a crucial message to Donald Trump.

Trump’s Vice President, and many members of his cabinet, are opposed to LGB rights and are especially opposed to transgender rights.

President Obama put many protections — by Executive Order — in place, such as Title IX inclusion and requiring public schools to allow students to use the bathrooms of their choosing. Candidate Trump vowed to rescind President Obama’s “illegal” Executive Orders but did not specific.

“It’s even more of a reason for California to lead the way on these issues and to move forward in recognizing people from marginalized communities as full and complete members of society, which is unfortunately not happening in many other states and something that is at risk at the federal level,” said Jo Michael, legislative manager for Equality California, an LGBT rights group co-sponsoring the bill.

People face “so much confusion” during interactions like going through airport security or buying something with a credit card if “their ID doesn’t exactly look like or match who they present themselves to be,” Atkins, a lesbian, told San Francisco’s Bay Area Reporter.

“As we delved into this, more and more issues just came up that called out for additional legislation” and “clarification,” Atkins said in an interview Tuesday.

Helping people get IDs that match their gender identity will keep them safer, said Sasha Buchert, staff attorney and policy counsel for the Oakland-based Transgender Law Center, who said the presentation of a mismatched ID “just creates a really ripe opportunity for people to experience harassment and discrimination.”

“Hopefully we’re working toward a day,” Buchert said, “where we don’t have gender markers on our documents at all.”

Kris Hayashi, executive director of the Transgender Law Center, added, “Whether going through airport security, voting, or applying for a bank account, everyone needs an accurate ID to safely navigate life. Yet outdated laws and other barriers have blocked almost 70 percent of transgender people from updating all of their identity documents, and one-third of transgender people have been harassed, assaulted, or turned away when seeking basic services. SB 179 will help California lead the way in reducing these barriers and help ensure that everyone can be legally recognized for who they are and can move safely through the world.”

Rick Zbur, executive director of Equality California, added, “This bill honors an individual’s most basic right: self-identification. It is up to an individual – not a judge or even a doctor – to define a person’s gender identity. This groundbreaking legislation will ensure that California supports and values its transgender and gender non-conforming residents and fully includes them in the fabric of our society.”