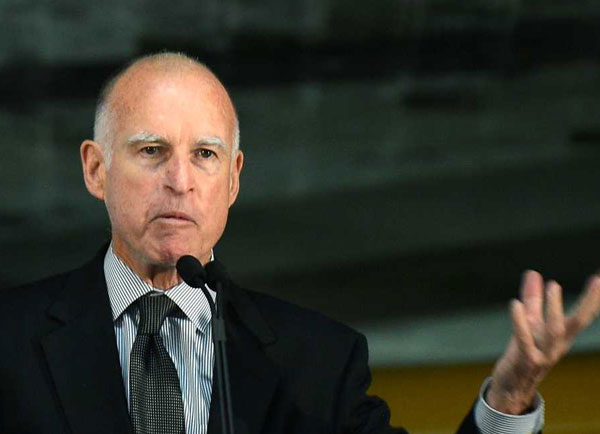 California will begin collecting LGBT demographic data and restrict how much insurers can charge for AIDS medications under laws signed this year by Governor Jerry Brown.

Legislation advancing LGBT issues in the state’s public schools, protecting the rights of same-sex parents, and assisting gay-owned businesses will all soon take effect after Brown signed the bills by the October 11 deadline for him to do so.

The governor also signed into law a quartet of bills sent to him this legislative session that advance transgender rights in California. All four will take effect January 1. (See “Transgender Rights” below)

“We are deeply grateful to both Governor Brown and the legislators who authored and got these bills passed,” stated Rick Zbur, executive director of statewide LGBT advocacy group Equality California. “California continues to lead the nation recognizing and protecting LGBT people as fully equal members of society thanks to their leadership.”

The bill is expected to cost the state at least $600,000 to implement. And more state agencies should be added to the list in coming years.

“After years of being left out of statewide demographic data, LGBT individuals will now be able to share their experiences to provide much-needed data to understand and ultimately reduce long standing health disparities that have disproportionately impacted these communities,” stated Chiu.

In an interview with the Bay Area Reporter, Zbur said he expects to see state forms and computer systems be updated with LGBT-specific questions prior to the deadline set in the legislation.

“I think many of the agencies will do it faster,” said Zbur. “From our perspective, we didn’t want to give them too much time but enough time to update their forms under the normal rotation for updating forms and computer systems. This is not a hard thing for them to do.”

California now joins New York state in requiring various state agencies to collect LGBT demographic data. EQCA and other LGBT advocates argue the information is necessary in knowing what social problems or health issues are confronting the LGBT community. In turn, the data can be used to advocate for more funding and programs to address those concerns.

“LGBT people have been invisible to government agencies that provide social services for far too long, because LGBT people are not counted,” stated Zbur. “This landmark bill will start to give California government and the LGBT community the tools necessary to develop programs to meet the healthcare and social service needs of LGBT people.”

Another bill of significant benefit to the LGBT community that passed this year was AB 339 authored by gay Assemblyman Rick Gordon (D-Menlo Park) and signed by Brown on October 8. It caps the amount an individual pays out-of-pocket at $250 for a single 30-day prescription.

Backers of the bill, which will go into effect January 1, 2017, expect it will be a boon for those Californians with cancer, HIV/AIDS, hepatitis, epilepsy, multiple sclerosis, or other serious conditions whose medications can cost thousands of dollars and often pay as much as $6,600 out-of-pocket.

“In a really big win for people with HIV, the bill requires plans to cover single-tablet regimens (STRs) for combination antiretroviral drug treatments that are medically necessary for the treatment of HIV,” noted Anne Donnelly, director of health care policy at San Francisco-based Project Inform.

The legislation also requires health insurers not to place most or all drugs that treat a specific condition in the highest cost tiers of insurance plans.

“No longer will patients have to choose between paying for their life-saving drugs and paying for housing, child care, or food,” stated Gordon. “This is a big step forward to improving health outcomes for the most vulnerable of patients.”

Under the bill, which takes effect January 1, sperm donors will not be legally considered a parent and unmarried people using assisted reproduction would have the same parental rights as married parents.

“AB 960 protects children born through assisted reproduction by ensuring that their family relationships are respected by the law,” stated Cathy Sakimura, the family law director at the National Center for Lesbian Rights, which co-sponsored the bill with EQCA and Our Family Coalition. “Every child deserves this protection, no matter how they were conceived.”

On October 8 Brown signed AB 865, authored by Assemblyman Luis Alejo (D-Salinas), which requires recipients of California Energy Commission grants or loans to increase procurement from minority-owned business enterprises, including those run by LGBT individuals. It goes into effect January 1.

“This landmark bill will create relationships between the energy industry and minority businesses,” stated Alejo. “I commend Governor Brown for creating a more inclusive green economy that encourages transparency in procurements and will help level the playing field for diverse businesses that may otherwise be overlooked in the clean energy sector.”

wo bills aimed at creating safer schools for LGBT students received Brown’s support this year. Both will go into effect January 1.

The most significant, signed by Brown on October 1, is AB 329, the California Healthy Youth Act authored by Assemblywoman Shirley Weber (D-San Diego). It requires sex education for students in grades seven to 12 to provide medically accurate and age-appropriate instruction on LGBT youth and families, and the prevention of sexually transmitted infections, HIV, and pregnancy.

“Providing sexual education, including information about STDs and their prevention, through our public schools ensures that the state is reaching millions of young people at a formative stage in their lives when this information can take hold,” stated Whitney Engeran-Cordova, senior director in the Public Health Division at the Los Angeles-based AIDS Healthcare Foundation. “This allows them to make wise and informed decisions as they engage in sexual activity when they are older.”

On October 7 Brown signed AB 827, authored by Assemblyman Patrick O’Donnell (D-Long Beach). It calls for the creation of a training program to help teachers combat bullying and support LGBT youth who are coming out of the closet or being targeted by other students.

“My experience as a classroom teacher has taught me one of the most important keys to academic success is a safe and inclusive learning environment,” stated O’Donnell, who chairs the Assembly Education Committee. “With the passage of AB 827, we will ensure our LGBTQ students have access to community resources and teachers are able to foster supportive learning environments, improve academic achievement and make our schools safer.”

A third bill, SB 524 by gay state Senator Ricardo Lara (D-Bell Gardens), stalled in the Assembly this year, and Lara will push for its passage in 2016. It would have required private residential facilities for youth, whether LGBT or straight, to obtain a license from the Department of Social Services.

If adopted next year, it will apply to residential boarding school facilities, military style academies, and boot camps.

Another bill that may be revived next year is SB 414, authored by state Senator Hannah-Beth Jackson (D-Santa Barbara), which would change various code sections in California law mentioning a “husband” and “wife” to the gender-neutral term “spouse” to reflect the fact that same-sex couples can now legally marry in California.

The bill had passed out of the Senate and was to be taken up by the Assembly. But in June Jackson opted to junk the bill’s original language, since it merely clarified existing law, and revised it with new legislation in response to an oil pipeline rupture that sent thousands of gallons pouring into the ocean off Refugio State Beach in Santa Barbara County.

The senator’s office told the B.A.R. that either Jackson or another lawmaker would likely reintroduce the original SB 414 language when the Legislature reconvenes in December.