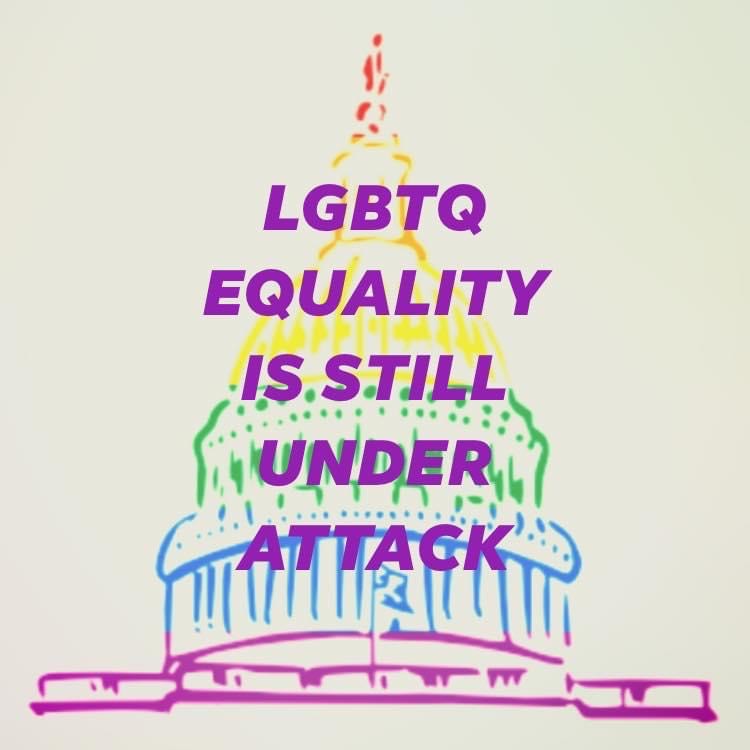 With an election that is still too close to call and with votes still being counted many fear that Biden will not clench the Presidency, rather Trump would be re-elected sending fear throughout the LGBTQ community. The Trump administration has put in place several policies that have undermined and eliminated rights protecting LGBTQ people.

Despite support from almost every segment of the U.S. population and a majority of Republicans, President Trump opposed the Equality Act. In May, the House passed the Equality Act, voting to guarantee critical non-discrimination protections for LGBTQ people among other crucial rights.

Trump has appointed anti-LGBTQ judges with alarming anti-LGBTQ records to appointments at every level of the judicial system, including anti-equality Supreme Court Justices Gorsuch and Kavanaugh and federal nominees Kacsmaryk, Mateer, Bounds, Vitter. Menashi and others.

Against the expert advice of military leadership, medical authorities, budget analysts, 70% of Americans and the armed forces of allied countries, Trump and Pence banned transgender people from serving in the military.

Trump’s Department of Justice upended previous DOJ interpretations of the Civil Rights Act that protect transgender and non-binary workers from employment discrimination and ceased enforcing non-discrimination protections as well as taking a hostile stance to LGBTQ workers in court.

The Department of Defense instituted a “Deploy or Get Out” policy, which would remove military personnel living with HIV from service solely because of their status.

Trump’s Department of Labor issued a regulation designed to allow federal contractors to claim a religious exemption to fire LGBTQ workers because of their sexual orientation or gender identity.

Health and Human Services (HHS) published a proposed major change to the administrative rule interpreting Section 1557 of the Affordable Care Act (ACA) to remove explicit protections for LGBTQ people in healthcare programs and activities by excluding LGBTQ people from protections from discrimination based on sex stereotyping and gender identity.

HHS also created a new office whose sole purpose would be to defend physicians and other medical professionals who decide to refuse care, including to LGBTQ patients.

The Justice Department issued a legal filing arguing that the entirety of the Affordable Care Act should be overturned. This move would jeopardize health care for over 130 million people with preexisting conditions like HIV and eliminate non-discrimination protections for LGBTQ people.

The Departments of Education and Justice eliminated Obama-era guidance clarifying that schools must treat transgender students consistent with their gender identity. This encourages schools officials to permit harassment of transgender students, deny access to facilities consistent with gender identity, and refuse to use correct names and pronouns — all inflicting untold emotional harm.

Secretary of Education Betsy DeVos has refused to rule out federal funding for schools that discriminate against LGBTQ students and has declined to state she would otherwise intervene should discrimination occur.

DeVos also rescinded Title IX rules related to schools’ obligations to address sexual harassment, including sexual violence. By eliminating the Obama-era rules, DeVos increased the standard of proof from “preponderance of the evidence” to “clear and convincing evidence” making it more difficult for survivors of sexual assault to obtain justice. LGBTQ people are disproportionately affected by sexual assault and harassment, and the stigma that many LGBTQ people face can make it more difficult for survivors to report.

Despite the fact that LGBTQ people are significantly more likely to experience homelessness in their lives, HUD Secretary Ben Carson has proposed a rule to permit emergency shelters to deny access or otherwise discriminate against transgender and gender nonconforming peoplewho are homeless. HUD also canceled a scheduled survey on LGBTQ homelessness.

Trump-Pence White House has proposed a federal regulation that would strip away nondiscrimination requirements and permit all Department of Health and Human Services grant recipients, notably adoption and foster care agencies, to discriminate against LGBTQ people, and in many circumstances religious minorities and women, and still receive federal funding.

These are just a few of the policies the Trump administration has used to take away LGBTQ rights. This election is more than just politics it is about equality and basic human rights.