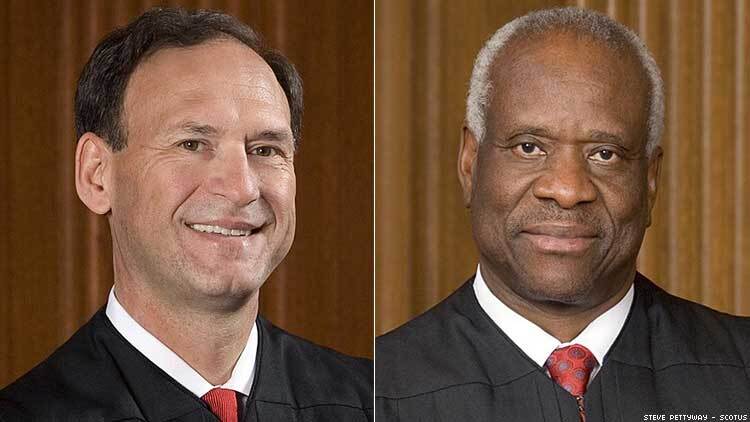 After the Supreme Court today rejected the appeal of Kim Davis, the Kentucky clerk who refused to issue marriage licenses to same-sex couples, Justice Clarence Thomas and Samuel Alito, who both oppose equal rights for LGBTQ Americans, reminded us that marriage equality is in danger when both justices wrote a lengthy discourse in defense of Davis.

The two justices suggested that SCOTUS must overturn Obergefell v. Hodges, which recognized same-sex couples the right to marry, in order to preserve religious liberty in the United States. “Davis may have been one of the first victims of this courts’ cavalier treatment of religion in its Obergefell decision but she will not be the last.” Thomas warned.

The dissent went on to say the court’s original ruling in Obergefell v. Hodges, which is where marriage equality was passed, created a “novel constitutional right over the religious liberty interests explicitly protected in the First Amendment” and that it enabled the government and courts to “ brand religious adherents who believe that marriage is between one man and one woman as bigots, making their religious liberty concerns that much easier to dismiss.” In essence, they maintain that marriage equality is in opposition to the First Amendment.

The case began when Davis, an employee of the Rowan County clerk’s office refused to issue marriage licenses to couples David Ermold and David Moore, and James Yates and Will Smith. The couples were rejected three times when they requested marriage licenses from Davis in 2015, who was an employee of the clerk’s office. She was subsequently fired by the county and sued by the two couples. Davis claimed she was protected by qualified immunity from any lawsuits for her refusal to abide by the law and court decision. A federal appeals court rejected her claims in a 3-0 decision.

Today’s ruling by the court means the couple’s civil case against Davis can proceed, but the dissenting opinion of the two conservative associate justices is a major cause for concern. With the passing of Justice Ruth Bader Ginsburg,  the Senate is likely to confirm another conservative judge who would likely also be in favor of overturning marriage equality to fill her seat.

While the statements made by the justices put some on high alert, Timothy R. Johnson, Morse-Alumni Distinguished Professor of Political Science and Law at the University of Minnesota says that doesn’t automatically mean the court is poised to overturn marriage equality.

“I would suggest that there is some cause for concern, especially with the imminent confirmation of judge Amy Coney Barrett, who, by all accounts has very strong religious beliefs,” he said. “That said, the court actually handled two LGBTQ rights cases at the end of its term this past June. Both of those cases said that if you fire someone because he or she is gay, or because he or she is transgender that that is a violation of Title IV of the civil rights act of 1964.”

While this was before Ginburg’s passing, Johnson says she was not the pivotal role.

“There were two conservative votes in those cases,” he continued. “Not only Chief Justice Roberts, who in fact, was a dissenter in the Obergefell case in 2015, but Justice Neil Gorsuch, Trump’s first nominee, actually wrote the opinions in those cases. So there is, in fact, currently a five person majority on the court, including the Chief Justice, who will take a second look before saying we’re going to do some harm to same-sex couples or rights that they may possess.”

Statistically speaking Justices Thomas and Alito have the minority opinion, according to a Gallop poll taken this summer, two in three Americans support same-sex marriage, matching the previous high in 2018.