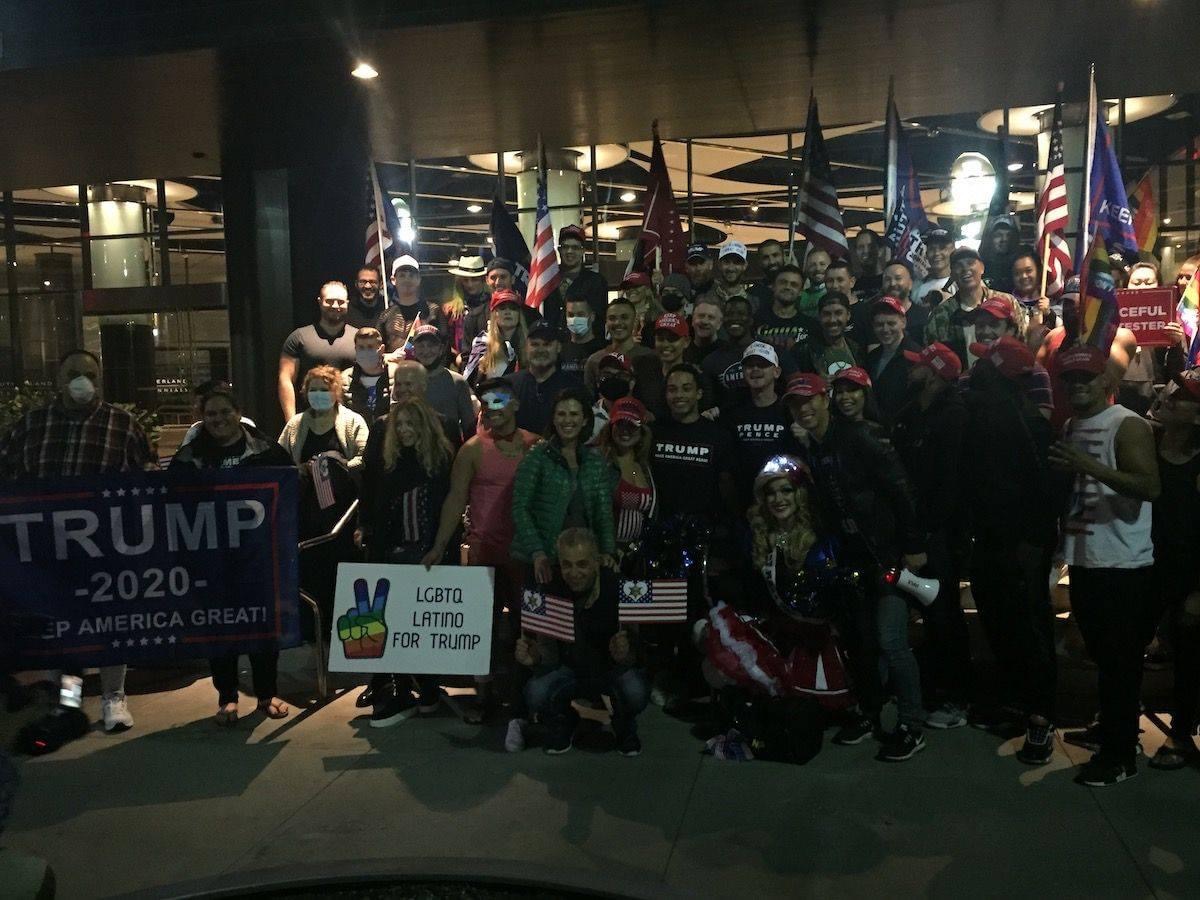 On Oct. 23 2020 a march, organized by the Log Cabin Republicans, a group of gay Republicans, rallied to proclaim their support for Donald Trump. The Log Cabin group billed the march as “Gays and Housewives Take Over WeHo” and had as many as 70 men and women donning Trump flags, LGBTQ Pride Flags, and a variety of patriotic gear to signify that they supported the president and that they were endorsing the idea that LGBTQ+ people also have the ability to support the president.

Gathering outside the Pacific Design Center on San Vicente Boulevard around 9:30 p.m. and beginning at 10 p.m. they began their march north to Santa Monica Boulevard stopping in front of Rocco’s (a gay bar and restaurant), chanting “gays for Trump” only to turn back again covering only one block.

Unlike those who have participated in other recent protests against police violence, few of the Trump supporters were wearing face coverings, although that is required by law in West Hollywood. As they walked along Santa Monica Boulevard,some angry shouts were heard from locals and diners enjoying a night on the town.

The rally of Trump supporters was one of a rare few that have taken place in West Hollywood, a city where only 8% of registered voters are Republicans. The city is known for its official opposition to Trump.

Mayor Lindsey Horvath once declared that Trump is not welcome in West Hollywood, and the City Council asked that the Trump star be removed from the walk of fame on Hollywood Boulevard.

The intersection of San Vicente and Santa Monica boulevards has been the scene of a number of demonstrations this year, including a march of tens of thousands of people protesting police violence against Black people, which culminated at that spot.

LA County Sheriff Department cruisers followed the marchers and when it ended dispersed or broke off the marchers into small clusters of people who continued to interact with each other.

Right after the march a photo of Los Angeles County Sheriff’s deputies surfaced standing with a group of the marchers holding a Trump campaign sign, many commented that they were confused to see LASD personnel in uniform supporting the president. This in light of what had been a contentious summer between law enforcement agencies in the LA area and the Black Lives Matter movement’s protests.