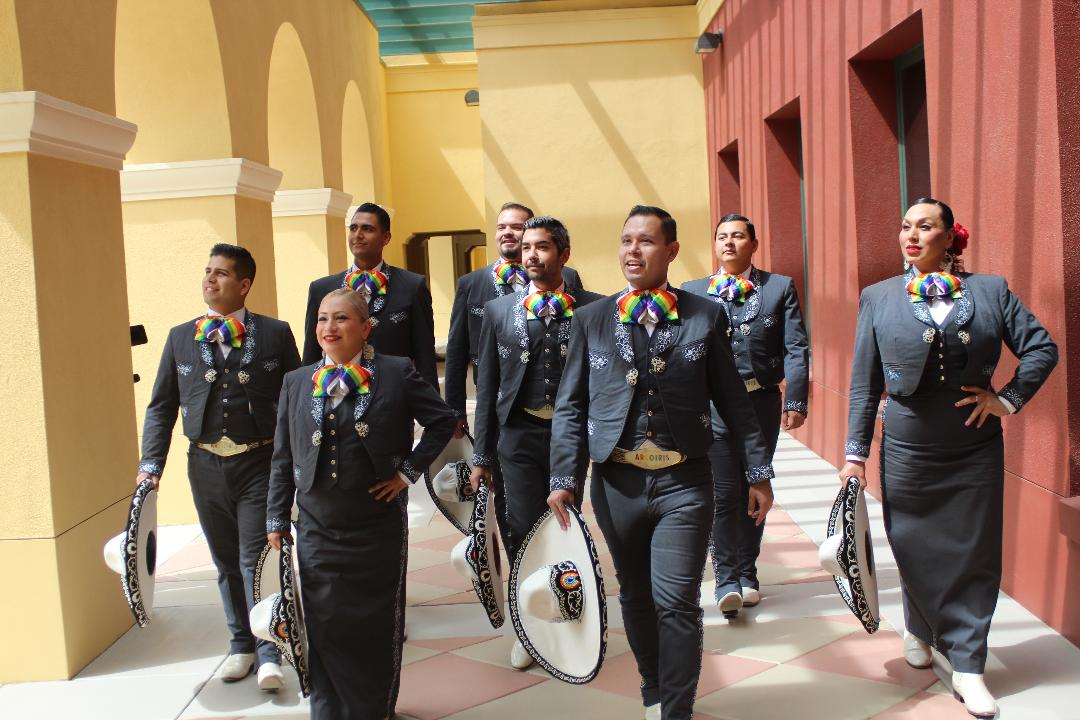 Carlos Samaniego, the founder and director of the world’s first LGBTQ+ mariachi, Mariachi Arcoiris de Los Angeles, still remembers the first same-sex wedding that the musical ensemble performed for when they regrouped in 2014.

Samaniego took out an ad in Adelante, a Latinx LGBTQ+ magazine. His goal was to garner attention for his newly reformed band, Mariachi Arcoiris de Los Angeles. The mariachi’s origin dates back to the year 2000; however, the band’s first onset didn’t last more than eight months, Samaniego said.

Samaniego and his best friend Natalia Melendez — the first transgender woman mariachi in the history of mariachi music — were passionate, albeit skeptical, about the mariachi’s reiteration taking place 13 years after its original induction in the early ‘00s.

Shortly after the ad was published, Samaniego received a call from a man who couldn’t believe that an LGBTQ+ mariachi existed.

“He said, ‘Oh my God, I can’t believe this,” Samaniego said. “That’s it — I don’t know what you guys sound like but I want to hire you for my wedding.”

The man from the phone call had been struggling to find a mariachi ensemble to perform at his upcoming wedding. He, a gay Mexican man, was going to marry his American partner and thought a mariachi performance would be perfect for his special day.

After agreeing to play at the man’s wedding, Samaniego felt saddened by the exchange he had with the engaged member of the LGBTQ+ community.

“Straight couples never have to think about [whether] the mariachi is going to feel comfortable at [their] wedding,” Samaniego said. “What the hell is that, you know? That never crosses their mind. That doesn’t even come to play — yet it does for same-sex couples.”

Mariachi Arcoiris de Los Angeles wants the LGBTQ+ community to know that it stands with them, completely. However, members of the musical performance also want their heterosexual mariachi counterparts to recognize that they’re a musical force to be reckoned with.

“We don’t bite unless they want us to,” Samaniego said. “We are human, like they are. We’re performing the same music as they are. Just because some of my guy [musicians] may be really feminine, or my girl [musicians] may be more masculine, or I have the first transgender woman in mariachi, doesn’t mean that we are any less of musicians then they are.”

The mariachi has come a long way since it got back together in 2014. Mariachi Arcoiris de Los Angeles — simply referred to as “Arcoiris” by its 11 members — originally formed at Cal State Los Angeles while Samaniego was a student there. The mariachi first played at an on-campus mock same-sex wedding, organized by members of the university’s LGBTQ+ student body, in protest of same-sex marriage being illegal in California at the time.

However, that version of the mariachi struggled to reach the heights that the current version of Arcoiris enjoys, Samaniego said.

“Back then, I was really young,” he said. “I was really inexperienced as a director. I was getting my degree in music. I had a lot of growing up to do, a lot of learning. So, the mariachi did not last long — it didn’t last a year, maybe seven or eight months.”

Following the first group’s disintegration, Samaniego traveled the world — residing in places like Italy and New York. Furthermore, he continued his work as a musician in an array of mariachi groups; however, each group he played in was comprised of mainly straight musicians. Although he felt impassioned about playing mariachi music, he did face constant discrimination for being an openly gay mariachi in several of these bands.

Aside from the rampant anti-LGBTQ+ remarks made by his fellow straight mariachis, Samaniego felt uncomfortable in the hyper-masculine environment created by these people. For example, Samaniego disliked the fact that he wasn’t able to serenade a same-sex member of the audience. After all, his musical passion was centered on playing Mexican folk-style music — a genre which heavily features themes of love, conquest and romance.

However, now Samaniego and his fellow bandmates are able to freely serenade who they please at any of their performances.

“I feel, being LGBTQ+, when you can experience that engagement, watching an artist do their thing on stage, and it touches you and their singing to you, there’s something personal — there’s something very, very special about that,” Melendez said. “We give that to our public, especially to our gay community, we give that to them to let them know that, hey you can have a man sing to you — real macho and real strong and real beautifully — and you can have a woman sing to you. In the beginning, that was unheard of — people shied away from that.”

Melendez, who was apart of Mariachi Arcoiris de Los Angeles’ first rendition in the early ‘00s, began playing mariachi-style music at the age of eight. 30 years later, she feels as though she’s reached a prime in her career as a musician.

“I feel a great deal of responsibility,” Melendez said. “I’m quite honored, I’m quite proud of who I am and what I stand for.”

Although Arcoiris is the world’s first – and only – completely LGBTQ+ mariachi, members of the band hope that won’t be the case for long. Both Samaniego and Melendez, who have been best friends for years, encourage other LGBTQ+ musicians to either band together and create their own LGBTQ+ musical collective or join Mariachi Arcoiris de Los Angeles, if they’re up for the challenge.

“Transmen and transwomen — I encourage all of them to do it,” Melendez said. “Whether they want to perform with us, whether they just want to be an artist, singer, I am behind them 100 percent. I welcome them to our group if they ever want to venture out like that. I would love to share the stage with my fellow transwomen.”

Mariachi Arcoiris de Los Angeles has seen a great deal of success in the last year. They released their first full-length record, titled “Los Arcoiris.” They headlined the 2018 “El Grito” festival in Grand Park — an annual event which showcases some of the most-talented mariachi groups ever. Their upcoming plans, for this month, include playing at the American Embassy in Madrid, Spain and celebrating Long Beach Pride by performing a three-hour set during one of Hotel Maya’s “12 Months of Maya-Achis” events on May 19 from 11 a.m. to 2 p.m.

“We uphold that not only does Arcoiris stand for a safe place but we also stand for the best for the best,” Melendez said. “That’s what we want to put out there.”