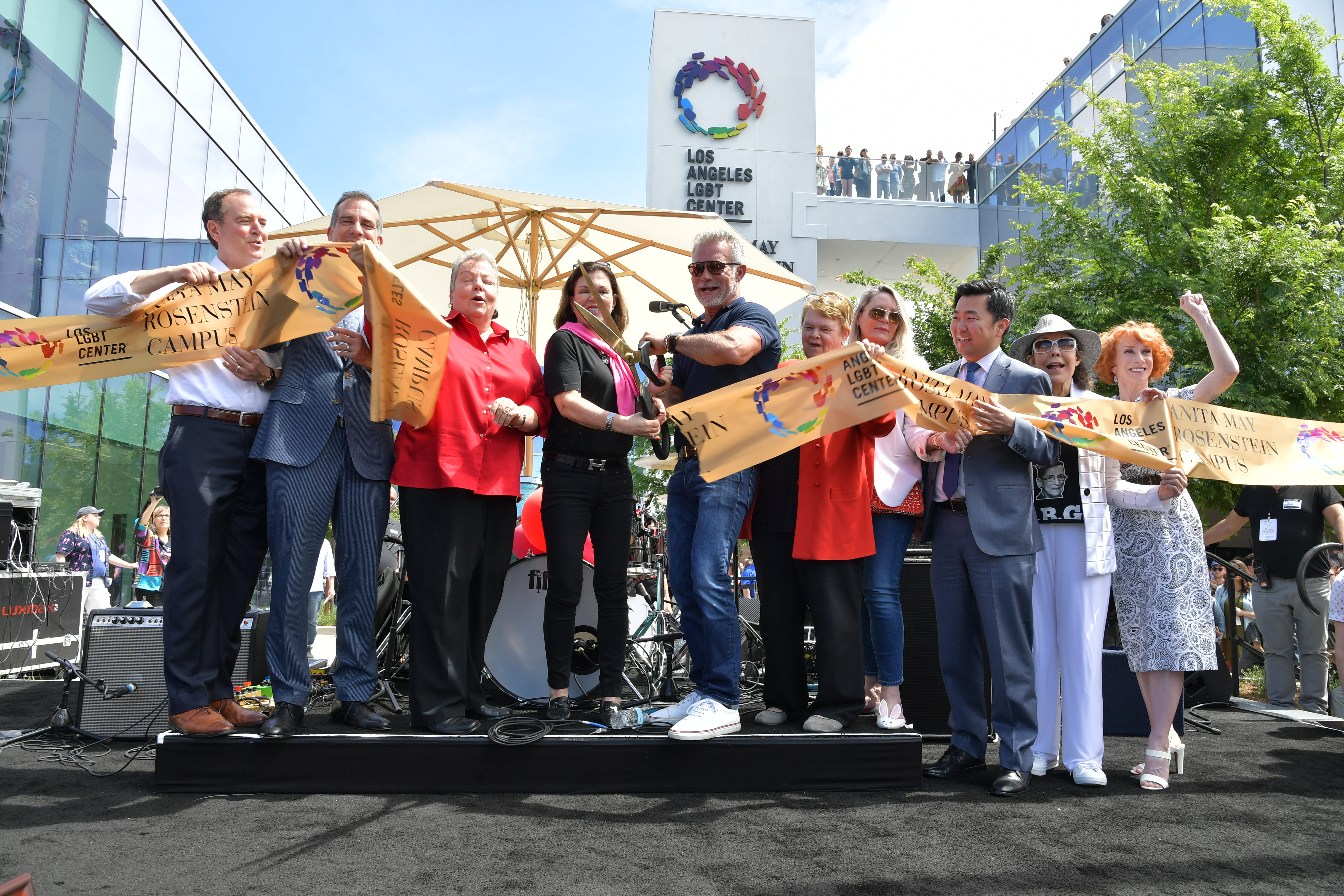 Just in time for its 50th anniversary, the Los Angeles LGBT Center celebrated the grand opening on Sunday of the highly anticipated two-acre Anita May Rosenstein Campus, an unprecedented complex designed to serve the most vulnerable people of the LGBT community: seniors and youth. To commemorate the momentous day, the Center hosted a free six-hour block party in front of the Campus, to which the public was invited, with a ceremonial ribbon cutting, guided tours of the state-of-the-art facility, and musical performances.

“We are immensely proud that the Anita May Rosenstein Campus allows us to greatly expand our services, especially to LGBT seniors and youth,” said Los Angeles LGBT Center CEO Lorri L. Jean. “The Campus is proof that a committed group of people who have the audacity to dream big and work hard are capable of creating something the world has never seen, something that now stands as a testament to the fact that we will not turn back in our march toward full equality and humanity.”

With 100 beds for homeless youth, a new Senior Community Center, Youth Drop-In Center and The Ariadne Getty Foundation Youth Academy, as well as expanded programming, administrative space and more, the Campus will also serve as the Center’s flagship facility. Its current headquarters (located at the four-story McDonald/Wright Building) will be transformed entirely into a health center. Phase II of the Campus—scheduled to open in mid-2020—will include 99 units of affordable housing for seniors and 25 supportive housing apartments for youth.

“Let’s be clear: this is not my Campus, it’s our Campus,” said lead donor Anita May Rosenstein. “Our Campus is a beacon of hope and inspiration for people around the world. It is a safe haven for youth experiencing homelessness, and it will become a unique experience for youth and seniors to live together and learn from each other.”

David Bailey, co-chair of the Center’s Board of Directors and Capital Campaign Chair, said donors supported the Center because the organization has a history of success.


“We know how to manage our dollars, and we know how to deliver vital services to our community,” Bailey said. “This entire project has been so inspiring. Eleven years ago, we dreamed of a large, intergenerational campus. And, now, the Anita May Rosenstein Campus will truly help make a life-changing difference for the youth and seniors who turn to the Center every day for help.”

Total costs for the Campus exceed $141 million. Of that amount, more than $57 million has been raised through gifts from generous individual and foundation donors, and another $9.5 million in New Market Tax Credits. The affordable housing costs ($63 million) are covered by government and other funding streams. After combining the generous gifts of the capital campaign donors with a contribution from the Center’s strategic reserve fund (approved by the Center’s Board of Directors), the Campus will be mortgage-free once everyone pays their pledges.

“The Center’s leaders gave KFA and Leong Leong a clear vision: that the design of the new Anita May Rosenstein Campus must reflect the boldness, optimism, and absolute certainty of the Center’s mission to care for, champion, and celebrate LGBT individuals and families,” said KFA Partner Barbara Flammang, AIA. “KFA is immensely proud to have participated in the creation of this historic new campus. We hope that the design and formal expression of these buildings and open, landscaped spaces contribute to the flourishing of the people who live in, work at, and visit this wonderful place.”

“The Anita May Rosenstein Campus is a new type of social infrastructure for the LGBTQ community that synthesizes social services and affordable housing into a porous urban campus,” added Dominic Leong of Leong Leong. “The architecture proactively interfaces with the city, while serving as a sanctuary for diversity. A series of internal courtyards create spaces of refuge within, while a new public plaza invites the community and the city to connect. The architecture is a mosaic of identities and programs rather than a singular iconic gesture.”