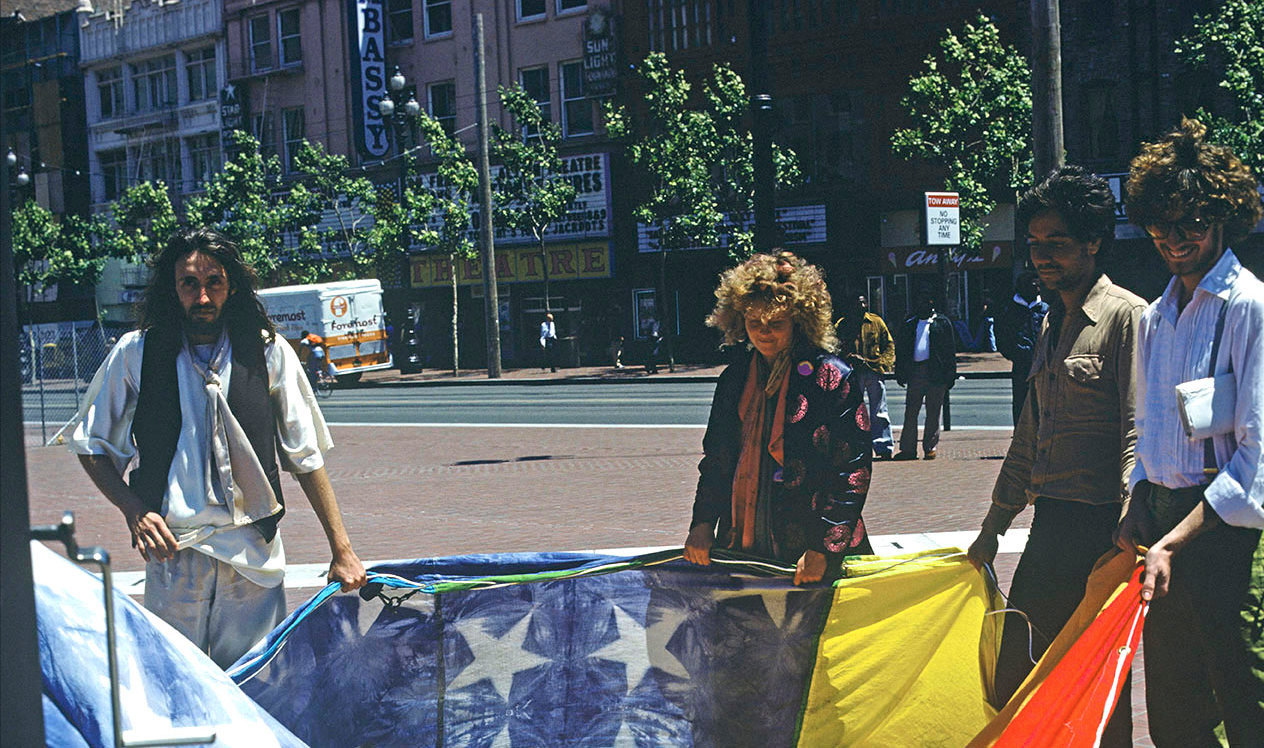 The history behind the woman who made the rainbow flag.

Lynn Segerblom wants to share her story – one that provides a different perspective on the LGBTQ+ rainbow flag’s origin. Not only would Segerblom appreciate credit for her work in designing the now internationally-recognized LGBTQ+ symbol, but she’s ready to create new handmade flags for the queer community.

For years, sole credit for the flag’s creation has been given to Gilbert Baker, one of three flag creators. The New York Times coined Baker the “gay activist who created the rainbow flag.” The Museum of Modern Art credits Baker with having conceived the design. Furthermore, MoMA claims each color on the flag is imbued with meaning, “red for life, orange for healing, yellow for sunlight, green for nature, blue for serenity and violet for spirit.”

Segerblom, however, does not agree with the aforementioned. She and James McNamara were also heavily involved in the flag-making process – as opposed to the widespread notion that Baker was the rainbow flag’s exclusive creator.

“There were three of us who were the flagmakers,” Segerblom said. “But the design – that was not his idea.”

The original rainbow flag, which was created in 1978 for San Francisco’s first Gay Freedom Day Parade, was hand-sewn and hand-dyed. It took hours of labor and help from an array of volunteers to finish, Segerblom said. The flag was completed through an extensive group effort at San Francisco’s Gay Community Center.

As for the rainbow design, it came from Segerblom herself, who – during the 1970s – was known by her alias: Faerie Argyle Rainbow.

Segerblom was passionate about rainbows during the time. She said that she thought a rainbow would be a beautiful way to represent the LGBTQ+ community’s colorful members.

“The rainbow – to me – encompasses everybody; doesn’t matter what your gender, your preference or your color,” Segerblom said. “Here we have this whole spectrum, from pink to violet. It encompasses everyone.”

During the ‘70s, Segerblom made a living from hand-dying clothes for designers. The Gay Community Center rented out a room to Segerblom for her hand-dying projects. She said that  she was at the community center at least five to six days a week. Aside from designing, she played a major role in the hand-dying process of the original rainbow flags.

After six weeks of a collective, and challenging, flag-making effort – a process involving 1,000 yards of cotton muslin – an array of flags were produced. Among these flags, the rainbow flag, and another flag – donning rainbow stripes and stars (which Segerblom also takes credit for designing), were made. A test-flight took place, before the Gay Freedom Day Parade, to make sure that the flags would fly as planned the day of the event.

“I was just in awe that it worked,” Segerblom said regarding the flags’ test flight. “I was so relieved, so relieved. Because I thought about them day and night. We were under time pressure, too. For awhile, I thought we’re not going to get this done on time. That would’ve been terrible.”

41 years later, Segerblom plans to recreate the original hand-dyed rainbow flag designs, along with making the first-ever hand-dyed Transgender Flag in honor of its 20th anniversary. She recently announced a “GoFundMe” campaign to aid her in this process.Aside from celebrating the rainbow flag’s anniversary, the new flags would compensate for the original handmade rainbow flags which were stolen at the Gay Community Center shortly after their debut at the Gay Freedom Day Parade, [Segerblom said]

“The flags belonged to the community – not to one person or two people,” Segerblom said. “It had to be more than one person [who stole the flags] because they weighed so much – it takes two or three people to carry one flag.”

Segerblom said that she plans to honor the LGBTQ+ community with her hand-made rainbow designs one more time. The flags she is acquiring funds for would, respectively, go to the LGBT Center of Los Angeles, the City of West Hollywood, Boys & Girls Club of America and Transgender Flag creator Monica Helms “to be carried in the World Pride NYC Parade in June 2019,” according to the project’s GoFundMe page.

Yet, unlike in 1978, where a plethora of volunteers cooperatively brought the rainbow flag to fruition, Segerblom is on her own for this new project. Although she’s passionate about flag-making, and is well-versed in the process, she admits that she could use help – both in making the flags and funding the development.

“I’ll just be really glad that we can make some cotton, hand-dyed rainbow flags – that we can pull it off,” Segerblom said. “There’s no such thing as a free flag – like as it didn’t cost anything to make it. Somebody has got to get all of the pieces, and then we put it together – a group of somebodies. People have to pay for the fabric, and whoever does the sewing has got to be paid, too.”

Segerblom said that her campaign is in need of someone to help her dye the flags – a process that can be time-consuming and laborious. Furthermore, an ironer and someone willing to wash the flags repeatedly – a crucial step in the flag-making process – are needed.

“I can’t do it only by myself,” Segerblom said.

Aside from her latest campaign, Segerblom is excited that her contribution to LGBTQ+ history is finally being shared. The rainbow flag, which is displayed in establishments and places around the world, is used to signal an environment welcoming of LGBTQ+ people. The flag’s significance revolves around diversity, equality and LGBTQ+ pride.

For more information on Segerblom’s campaign, visit the GoFundMe page at: gofundme.com/historic-pride-flags