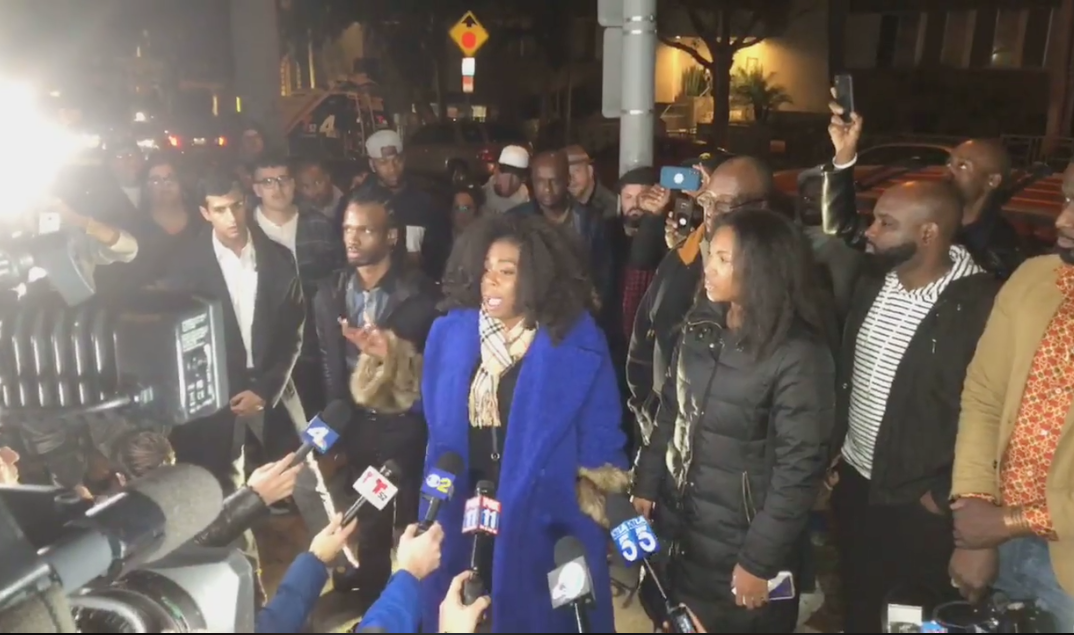 A crowd of over 100 people showed up to a rally outside the home of prominent LGBTQ+ political activist and campaign donor Ed Buck Monday night after a second gay black man was found dead in Buck’s West Hollywood apartment earlier that morning.

Buck has not been charged with anything for either deaths. Detective Q. Rodriguez of the Los Angeles Sheriff Department’s Homicide Bureau is leading an investigation into the most recent death of 55-year-old Timothy Dean.

“Me personally, I demand a full investigation. I really think this man, Buck, was involved,” Dean’s sister Joyce Jackson said, according to the New York Daily News. “I really believe he preyed on people. I think he’s sick. He really needs to get some help.”

In July 2017, 26-year-old Gemmel Moore was found dead in Buck’s apartment due to an overdose on methamphetamine.

Buck’s lawyer, Seymour Amster, said that his client wasn’t responsible for either deaths and that both men were friends he was trying to help. Amster said that Dean may have been using drugs before he arrived.

Amster said that the most recent victim “reached out for [Buck’s] help” Sunday night and began acting “in a bizarre way” after he arrived at Buck’s apartment, as reported by Fox News.

“As far as we’re concerned, this is an accidental death,” Amster said.

Last year, when the police ruled that there was insufficient evidence to charge Buck for anything regarding Moore’s death, Gemmel’s mother LaTisha Nixon, family friends and supporters were upset. They pointed to evidence that included a diary in which Moore claimed Buck paid him to inject the drug.

In a December 2016 entry, Moore wrote: “I’ve become addicted to drugs and the worst one at that. Ed Buck is the one to thank. He gave me my first injection of crystal meth it was very painful, but after all the troubles, I became addicted…”

The LGBT Center of Los Angeles issued the following statement on Monday regarding the deaths in Ed Buck’s home:

“The Los Angeles LGBT Center calls upon Los Angeles County Sheriff Alex Villanueva and his department to fully investigate this tragedy and aggressively seek justice wherever the investigation might lead.

“Although the investigation is in its early stages, we urge Sheriff Villanueva to keep the public fully informed as LGBT people have a considerable and urgent interest in a case that is so clearly linked to the health and safety of our community. The reports we have heard provide more questions than answers. The fact is two black men have died at Mr. Buck’s home in less than two years.

“While much is still to be learned, it appears this tragedy is linked to substance use. LGBT people and other marginalized groups are at elevated risk for impacts that result from the current epidemic uses of opioids, methamphetamine, and other dangerous drugs. The Center provides free or low-cost, comprehensive, and judgment-free addiction recovery services and has a service to provide free fentanyl testing strips to those who request them. For help or more information, contact the Center’s Addiction Recovery Services at recovery@lalgbtcenter.org or 323-993-7448.”

At the Monday night rally, Jasmyne Cannick, a communications and public affairs strategist who has worked on behalf of Moore’s mother, demanded action from the L.A. Sherrif’s Dept. and District Attorney Jackie Lacey.

“We will leave and there will be another man going into his house tonight, another man coming in tomorrow,” Cannick said. “Now it’s time for the Sheriff’s Department and Jackie Lacey to sh-t or get off the pot.”

Cannick also said that she hoped that newly elected Sheriff Alex Villanueva would take a more aggressive approach to the investigation than former Sheriff Jim McDonnell did.

This story is developing; Check thepridelaprod.wpengine.com for updates.