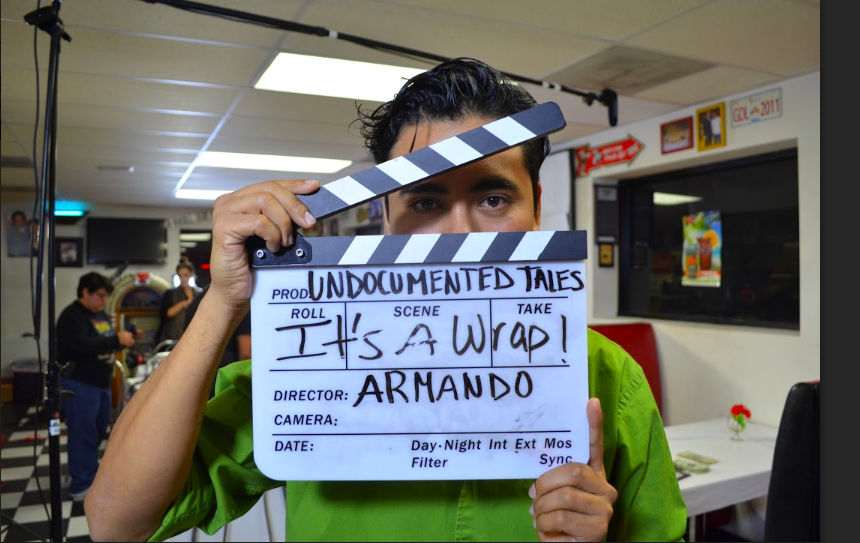 “When have you ever seen an openly queer and undocumented person in Hollywood? Never, that’s when,” filmmaker Armando Ibanez told The Pride L.A.

In the past few years there has been an exponential rise in the visibility for the LGBTQ+ community. Laverne Cox was named “Most Beautiful Women” by People Magazine in 2015. The Supreme Court struck down any state ban on same-sex marriages. We’ve even seen a record high percentage of regular and recurring LGBTQ+ characters on scripted primetime programming. Yet, Ibanez asserts that the same cannot be said for the “undocuqueer” community whose rarely seen under the media spotlight.

To broaden the queer narrative, Ibanez has combined his life experiences and his passion for filmmaking and advocacy to give a platform for those who identify as “undocuqueer,” or someone who is both undocumented and a member of the LGBTQ+ community. Since September 2015, Ibanez has produced and star in the web series “Undocumented Tales,” which chronicles the life of Fernando, an undocumented-queer restaurant server residing in Los Angeles. The series is currently in pre-production for season three.

Despite relying on a cast of volunteers and a modest budget supplied through crowdfunding, the series has been met with enormous community support and many invitations to speak at college campuses such as California State University, Los Angeles, UCLA and the University of Washington. To mark the anticipated creation of season three, and to better understand the plight of the undocumented-queer community, The Price L.A. spoke with Ibanez to discuss his work and success.

What inspired you to make this web series?

My own life experiences. I mean everyone’s experience is different, but I wanted to be able to share my experiences, and hopefully others can relate.

Can you speak more on those experiences being undocumented and queer?

Well again, everyone’s experience is different, but for me I remember the journey in college being really hard. I didn’t qualify for AB 540, and I didn’t have any high school requirements. Thankfully, they made an exception using my past history from adult school, but it was still really hard because of my age. I was thirty finishing my GED, and I was so excited to share that with people. I remember at work there was this white server and he said, “Really, you’re f-cking thirty.” The intersectionality of being queer just adds a whole other layer. When you add it all up, you have all these negative things affecting you. Be a good immigrant, speak English and play by the all the rules. We have the dreamers and the parents. I don’t match either. We need to change those narratives and that’s what my series is meant to do.

Was there any pivotal moment where you thought, “I need to create this.”

Around September 2015, I saw the Emmys with Viola Davis. She gave her speech and she said, “You cannot win an Emmy for roles that are simply not there.” That night I sat down and wrote the first script for “Undocumented Tales.” It was about eight pages and I sent it to friends. I think I couldn’t sleep because I was so excited. I kept thinking, “I’m making this, I’m making this.” There was so much excitement because this was a story that didn’t exist. It was a big deal.

Why have you chosen to pursue film and use it for this cause?

When I came to this country I was told by my parents and friends that I was only going to work and learn English. Maybe then I’d be able to get a better job. I believed it for years. Later when I got accepted into college, I had a meeting with an advisor. I remember being told, “Here are the list of classes and if you’re interested, you can’t start with the arts, painting or film.” And I thought, “I can take film? I can be a filmmaker some day?” For me to be an artist, I thought you had to be white and rich. I was so excited to share this with friends and family, but it wasn’t welcomed, especially by my parents. Instead it was the undocumented community cheering for me. They helped me discover my passion and purpose; that’s why I do what I do.

What has been the most unexpected experience or insight you’ve gained from this process of becoming a filmmaker and creating “Undocumented Tales?”

What I didn’t expect is that this would be like therapy. It’s healing! After premiering the episodes I would get messages like, “Oh my god I never saw this. He’s like me!” I don’t want to lose that and that’s why I’m scared of giving this away to a big time producer and losing control of this narrative. With this series, I feel like it’s saying, “Hollywood you’ve damaged our stories for many years, and you need to take a seat and let us have control of our story.”

Despite all the educational, relationship and financial barriers, how have you managed to make being a filmmaker a reality?

It was really hard. I’m still a server. I’m sacrificing everything: hiking time with friends, brunch, writing – so much! I do this work all during my free time. This project requires passion, discipline and commitment. Sometimes, you need to sacrifice to pursue what you love.

What would you say is unique about the undocuqueer community?

Those who identify as undocuqueer are not fully accepted by either sides of their identity. I feel that the undocumented community excludes the LGBTQ community. Similarly, we have tons of people fighting for the LGBTQ community, but not including those who are undocumented. I saw an example of this on social media. Every time I post something about undocumented people I get so many likes compared to queer posts. It’s sad, but sometimes the Latino community is not okay with the queer people. We’re so brainwashed with one set standard – other communities do not exist. That’s something I’m trying to change.

You don’t always need to speak out. The fact that you wake up every day means you’re already fighting the system. This country doesn’t want to see us thriving and smiling. Being undocumented and queer is something I think about and struggle with every day. I know you’re going through a lot, but there others out there like you. We are here, and we stand with you.