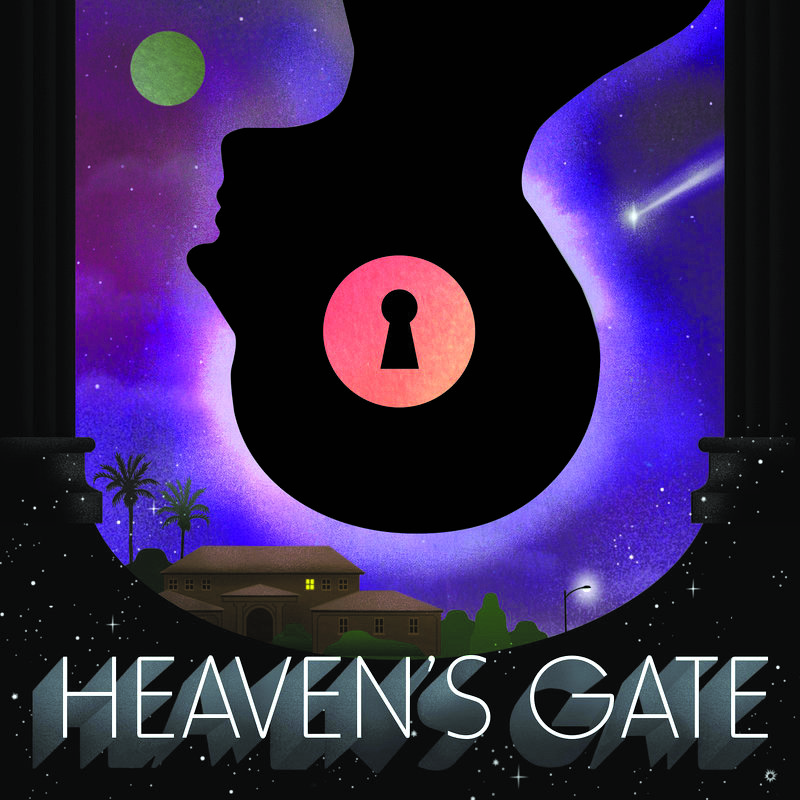 The first thing you’ll start to pick up on when you begin your journey into Glynn Washington and Pineapple Street Media’s new podcast “Heaven’s Gate,” is that the ‘70s were quite the time to be alive. The books atop the New York Times nonfiction best-seller list were pulpy combinations of self-help, religion, and mystical sci-fi conjecture, and, to hear Washington tell it, people were pretty much ready to believe in any kind of bullshit, provided it was exciting. And exciting, in the context of pong and “Charlie’s Angels,” meant…aliens?

All of this might not seem dangerous (or even that far off from our current reality…”Game of Thrones” and “Stranger Things,” anyone?) but what it created was a perfect storm for a group of vulnerable followers and two charismatic, slightly looney leaders who prophesied eternal life and the return to a grand alien lifestyle somewhere among the clouds. These leaders were know as “Ti and Do” or as “Bo and Peep,” and they caused…rather. invited,… 39 people to kill themselves alongside them in 1997, beneath matching purple shrouds and decade-edition Nikes.

Hooked yet? You will be. Launched on October 18 as part one of a ten-part series, “Heaven’s Gate” seeks to get to the bottom of the cult’s legendary power. Host Glynn Washington is well-poised to present a solid case for the irresistibility of leader Marshall Herff Applewhite Jr.’s magnetic pull: Washington himself grew up within the cult of Herbert W. Armstrong’s Worldwide Church of God, which promised a return of Jesus to earth in the ‘80s. Washington describes this promise as being so convincing that he would “wear [his] shoes to bed” in order to be ready when it happened.

Armstrong died before the cult could claim too many lives, but Applewhite and friends kept on from the late ‘70s in the late ‘90s, when all but a few famously perished with a fatal swig of Kool-Aid. With Washington’s guidance, “Heaven’s Gate” promises to answer the “why” of it all. Which is, let’s face it, a big promise.

Still, even if “Heaven’s Gate” doesn’t quite live up to its cultishly delicious promise, it’s still a hell of a good story. Who doesn’t love cults? Who doesn’t love getting into the nitty-gritty of why people leave their established lives, wives, husbands, and children to try to get closer to their alien kin? And to top it all off, something tells me Washington is going to go deeper into Applewhite’s backstory and give us the biography that we’ve always wanted but have been too afraid to ask for. Applewhite is described in episode two of the podcast as an unhappy bisexual, open about his attraction to men, but also enough of a product of the times to not feel too great about it. He’s a complex character placed at the center of one of the 20th century’s most bizarrely tragic tales of cult of personality. We don’t even really need to make mention of Trump to explain why the “Heaven’s Gate” story is more relevant now than ever – but of course, we will anyway.

Today, the idea of the cult is more fascinating – and eerier – than ever, with political commentators constantly referring to Trump’s bizarre psychic hold on otherwise semi-sane individuals, and even Ryan Murphy jumping on the bandwagon, taking inspiration from the Trump era to produce his most recent season of “American Horror Story,” subtitled: “Cult.” If Washington’s podcast can tell us anything, hopefully it’s how to survive in the era of Instagram and cult of personality. If it can’t tell us anything, we’ll tune in anyway. 39 to beam up.