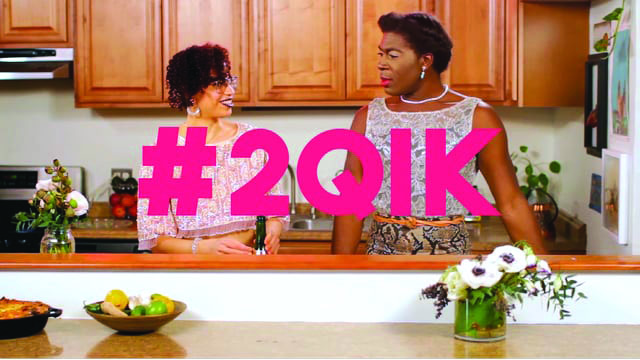 The digital platform that brought us “Brown Girls” now heralds the second season of “Two Queens in a Kitchen,” an unconventional cooking show which explores topics of race, queer culture, and the impact of intersectional feminism. “Two Queens in a Kitchen” creator and director Elijah McKinnon and Open TV founder Aymar Jean Christian began the second season by talking about art and TV, and by claiming space and the presence of Open TV for the queer community as well as its filmmakers, all while making salad and mixing drinks.

Christian spoke about how Open TV is revolutionizing the TV industry by presenting a platform that defies television conventions through a more expressive way of production. “Folks are realizing that television doesn’t have to be what they grew up with or their mom’s or dad’s or grandpa’s television, it can be a kind of television that inspires you that teaches you to think identity in more complex ways, to think about the role of space and where you are in your city and be a community as a part of television.” He went on to mention that often we expect writers and directors to create a series, but with Open TV creation of television content is open to artists of all kinds.

One of the most important things in claiming space as both Christian and McKinnon talk about in the first episode of the series’ second season is coming together as a community and creating companies that cater to queer talent and creativity. Open TV’s “Brown Girls” has received an Emmy nomination for Outstanding Short Form Comedy or Drama Series on top of getting a full series deal with HBO. “Brown Girls” is nominated alongside online spin-offs of major shows like “Broad City,” “Better Call Saul” and “Fear the Walking Dead.” Last year’s nominations included shows like the YouTube show “Her Story” about a trans woman finding love and embracing her sexuality in the same category. Online platforms are showing to be a place where queer POC can see their ideas fully realized on screen and audiences are responding well enough for them to be considered for bigger projects.

Open TV has proven to very much be a platform for visibility in indie filmmaking to the mainstream. You can view the second season of “Two Queens in a Kitchen” and more on OpenTV.com.