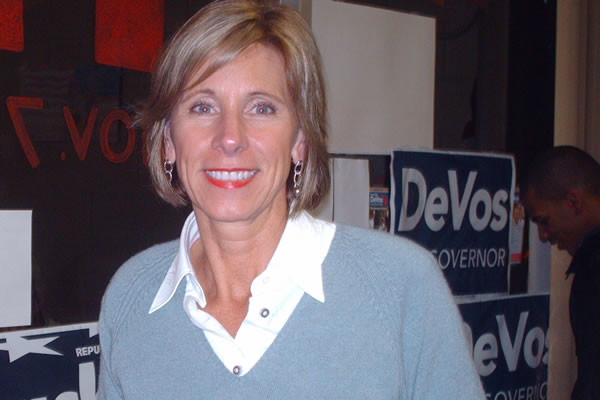 Donald Trump’s choice for Education Secretary, Betsy DeVos, has never attended, worked in nor sent her children to public schools. She has no experience in government and has never run or managed a bureaucracy or any large organization. She has spent much of her adult life donating millions to politicians — most of them antigay — so that she can in turn lobby them for support her favorite pet cause: vouchers that give money to conservative religious schools.

Her family has donated millions to antigay causes. And her nomination has been opposed by every LGBT organization in the country.

RANDI WEINGARTEN, a national labor leader, attorney, and educator who is president of the American Federation of Teachers (and a lesbian), wrote in The Advocate that, “DeVos has spent her career bankrolling efforts to undermine and privatize public schools, and members of her family have donated to antigay causes, making it harder to protect LGBTQ students from hate and bigotry. Civil rights groups have said they’re deeply concerned  that she will dismantle the civil rights protections gay and transgender students have finally won.”

Weingarten also wrote, “DeVos’s family has a long record of opposing LGBT equality. Foundations run by her parents and her husband’s parents have donated hundreds of thousands of dollars to Focus on the Family, a group that’s promoted damaging gay “conversion therapy” and called homosexuality “preventable and treatable.” A foundation run by her husband’s brother and sister-in-law donated $500,000 to the antigay National Organization for Marriage, and a foundation run by DeVos and her husband has donated more than $100,000 to the Institute for Marriage and Public Policy. DeVos’s late father, Edgar Prince, helped found the Family Research Council; her mother, Elsa Prince Broekhuizen, sits on the boards of the FRC and the Acton Institute, which sponsored a conference held by an antigay hate group. Unsurprisingly, DeVos wants to immediately reverse the Obama administration’s hard-won protections for LGBTQ students.”

For Republicans who argue that perhaps an “outsider’s point of view” is what Washington needs, that premise satisfies them best when a proven leader emerges with has a track record of effectiveness –a master entrepreneur, a transformational CEO or a schools superintendent who successfully improved a major system and who has demonstrated a commitment to diversity and equality. DeVos fails to meet these criteria.

And since no Democrats are expected to vote for DeVos, it’s up to a handful of other Republican senators, all of whom are undecided, to determine her fate. She needs at least 50 votes to win confirmation and there are just 52 GOP senators.

And that’s still likely. What’s notable, however, is that Donald Trump appears to be losing even Republican women supporters.

“This is not a decision I make lightly. I have a great deal of respect for Mrs. DeVos,” Collins said on the floor of the Senate Wednesday. “I will not, can not vote to confirm her.”

Collins told Politico that, although she will not vote for her, she will allow DeVos to advance to a final vote. Likewise, Murkowski also says she will oppose Collins on final passage.

“I have heard from thousands, truly, thousands of Alaskans who have shared their concerns about Mrs. DeVos,” Murkowski said. “I do not intend to vote on final passage to support Mrs. DeVos.”