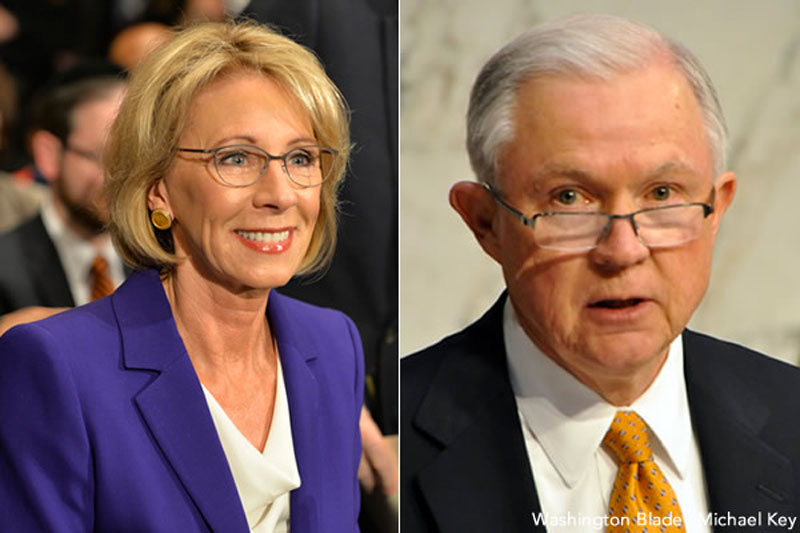 BY CHRIS JOHNSON  |  Despite pleas from parents of transgender children and LGBT employees, the Trump administration is set Tuesday to rescind Obama-era guidance to schools barring discrimination against transgender students and ensuring they have access to the restroom consistent with their gender identity.

Mara Keisling, executive director of the National Center for Transgender Equality, told the Washington Blade on Monday she’s heard from “reliable sources” President Trump has green-lighted the plan for the Justice Department and Education Department to send a “Dear Colleague” letter to schools rescinding the guidance.

“This is the first day of the president’s second month in office and he is now fully coming after LGBT people,” Keisling said. “I’m angry; I’m outraged. This is about kids who just want to go to school who just want to be themselves, and to hear the president a week or two ago talk about how supportive he is of LGBT people, it’s just outrageous that he go after trans kids this way.”

Jointly issued in May under the Obama administration by the Justice Department and Education Department, the guidance asserts that denying transgender students access to the restroom in accordance with their gender identity violates the prohibition on sex discrimination under Title IX of the Education Amendments of 1972.

Rescinding the guidance is consistent with a legal brief the Justice Department filed earlier this month in litigation against the guidance filed by Texas Attorney General Ken Paxton on behalf of 12 states. As a result of the litigation, U.S. District Judge Reed O’Connor issued a preliminary injunction barring the administration from enforcing the guidance nationwide.

Although the Justice Department under former U.S. Attorney General Loretta Lynch filed an appeal along with a request with the U.S. Fifth Circuit Court of Appeals seeking to limit the scope of the injunction to the 12 plaintiff states, the brief under Sessions withdraws that request and informs the federal appeals court the Trump administration is “currently considering how best to proceed in this appeal.”

Transgender advocates took the change in position at the Justice Department as a signal Trump would soon fulfill his campaign promise to reverse the guidance.

A flurry of letters were sent to the Trump administration calling for preservation of the guidance. One came from a quartet of pro-LGBT advocacy groups, one from nearly 800 parents of transgender youths and another from LGBT employees at the Education Department. House Minority Leader Nancy Pelosi (D-Calif.) said in a statement to the Washington Blade the change in position at the Justice Department is “deeply disappointing.”

Other LGBT advocates over the course of the holiday weekend said they similarly heard the Justice Department and Education Department would act to rescind the guidance.

Kelly Love, a White House spokesperson, had no comment in response to the Washington Blade’s request to confirm the Trump administration would follow up on the Justice Department’s move and rescind the guidance.

“We have nothing to add to this report right now, but will keep you posted if anything changes,” Love said.

A spokesperson for the Justice Department declined to comment. The Education Department didn’t immediately respond to a request to comment over the holiday weekend.

A decision to withdraw the guidance could be an initial signal of the Trump administration’s position in the case before the U.S. Supreme Court known as Gloucester County Schools v. G.G., which resulted from transgender student Gavin Grimm suing his high school to use the restroom consistent with his gender identity. The questions before the court are to evaluate the guidance and whether the prohibition of sex discrimination under Title IX applies to transgender students seeking to use the restroom in school consistent with their gender identity.

The Trump administration would be rescinding the guidance weeks after the White House issued a statement declaring Trump is “respectful and supportive of LGBTQ rights” and would preserve a separate order from President Obama barring anti-LGBT workplace discrimination among federal contractors.

Even if the U.S. government rescinds the guidance, transgender advocates have insisted students are still able to sue on their own under Title IX if they feel they’ve experienced discrimination as a result of their gender identity.

“It doesn’t take away trans kids’ rights,” Keisling said. “It’s Title IX that protects us, not Donald Trump or Attorney General Sessions agreeing with us on Title IX.”