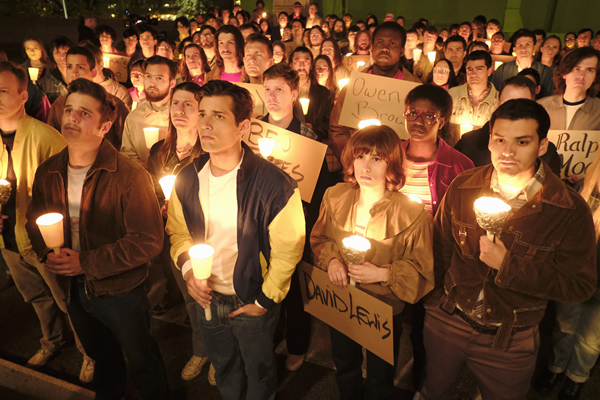 Starting Feb. 27, ABC will begin airing “When We Rise,” a seven-part, eight-hour miniseries about the history of the gay rights movement, written and created by prominent gay filmmaker, Dustin Lance Black.

“I started working on this about four years ago, and never would have guessed it would land in times like these where unfortunately, it feels so necessary,” Black says. “I would give anything in the world for it to feel less necessary.”

“When We Rise” deals with some of the most influential people in the movement and the big button topics of family rejection, landlord discrimination, gay bashing, police harassment, legislative defeats and AIDS.

“History speaks for itself in a way. What we tried to do was be authentic and honest about that history. I’m really diligent about getting my stories to be as truthful as possible,” Black says. “Granted it covers 45 years in eight hours, so obviously I have to telescope the timeline and combine some characters. But if you can be honest to history, it will always shine a light for you. Civil rights has really always been on a pendulum and our job is to keep it in the right direction as much as possible.”

Part of that honesty is being authentic to the times and not shying away from derogatory terms that have been used throughout the years, which is why viewers should prepare themselves for some of the ugliness that the LGBT community has faced.

“ABC really stepped up because you’re not supposed to be able to use some of these disparaging words on the air anymore,” Black says. “Words like ‘faggot’ or ‘dyke,’ if we don’t use these words, it’s not truthful. That’s not the experience gay people are having today, much less in the ’70s. I did use ‘Roots’ as an example and they heard me and fought for me to be able to use these words, which makes the experience more real and visceral.”

“When We Rise” introduces viewers to Cleve Jones, a Quaker activist who escapes his repressive life in Phoenix and finds refuge in San Francisco and the peace movement; Roma Guy, an early feminist leader in San Francisco; and Ken Jones, an African-American Navy man who is reassigned from Vietnam to San Francisco to spearhead a new military desegregation program.

Black admits that narrowing the characters and stories he wanted to tell was a pretty big undertaking, which is why he spent the entire first year doing research. He focused on characters who’d been activists their entire lives and who are still alive. Subsequently, the late Frank Kameny, who was a longtime Washington resident, is not mentioned in the series.

“It’s about time that LGBT people can have their stories told, and it could be funny, it could be dramatic, it could be political and show people survive and thrive,” he says. “We’ve lost so many of our forefathers because of AIDS, so that narrowed it down. I wanted these activists to be connected to other social movements and show that the best of us fight for our brothers and sisters in other social justice movements as well. The secret is not just winning rights, but maintaining them.”

“I had the great fortune of getting this cast. It’s the honor of my life personally to have the opportunity to bring our stories to life and to create a popularized history that we’ve been robbed of,” Black says. “I think when actors read scripts like these, they know the importance of addressing a real need in society. Whoopi called me and said she wanted to play Pat because she knew her. Rosie told me how much the words of Del meant to her as a young person and wanted to play her. You quickly understand how personal this is to all these actors and you would be a fool to say no to this emotion. This isn’t a major feature film and they all said yes.”

The project was mostly completed by the time the results of the presidential election were revealed in November, so Black didn’t make any major changes to the series, even though he knew that Donald Trump and Mike Pence are no friends of the LGBT community.

“I like to pack a punch and say what I need regardless, so I don’t think it needed to be any stronger,” Black says. “I was already concerned that we were losing our connection with our brothers and sisters in other social movements — we were making great strides and weren’t moving forward with our arms locked with them. That’s stated strongly in the series. It’s why I titled the series ‘When We Rise’ and why the biggest word is ‘We’ because it’s about how we all need to push back against the backlash and how we need to do that together.”

One thing that Black changed since Trump took office was his plan for an epilogue at the end of the series, which as of 10 days before the miniseries airdate, had yet to be written.

“I’m waiting because a lot could happen in the next two weeks and it feels like we are making news every single day,” he says. “That’s the one thing that will change a bit and it may be written close to when it airs.”

The important thing for Black is that the message is heard and the miniseries isn’t easily dismissed.

“I think a young generation coming up is going to see this show and wonder if it ever could have been that bad or that difficult. I did many things through the series to hammer home that yes, these things really did happen,” he says. “Part of that is not pulling punches — showing loud and clear that you’re not going to only face opposition from those that discriminate against you, but you’re going to face even more opposition from people who are your heroes in the movement and you have to work with.”

Black included archival footage on occasion to remind viewers that these moments are real and the struggle is real and this generation was faced with epic confrontations and they rose to the occasion and fought back and won.

He believes that even those who voted for Trump and have mixed feelings about all of this will get a lot out of the series.

“I very much wrote ‘Milk,’ which is what most gay people know me from, for myself. The gay kid living in the conservative time and what could I have seen that would have given me hope. That was a story told in a way that would have,” he says. “When I was writing ‘When We Rise” I was thinking of my conservative, half Mormon, half Southern Baptist military family spread out through Texas, Arkansas and Louisiana. I love them to death and am often more comfortable with them at a barbecue than I am at a beach party on the coast.”

He understands that most of them probably voted for Trump and have conflicting views about many of the issues that are important to him, so he thought about what they had in common.

“I know what we disagree on; I wanted to find our common language. If you go to the dinner table and bring up politics, science or the Constitution, no one is going to listen. If you want to engage, you need to tell a story, and it’s even better if it’s an emotional story, and better yet, a story about your family,” Black says. “LGBT people love to tell stories of family; they are part of our coming-out stories — the families we lost, the new ones we built to survive. LGBT people and my dear family both speak the same language of family fluently and I built the show centered around that.”

Black’s hope is that by focusing on the language and shining a little light on the issues, that maybe the movie helps to bridge America’s ideological gap.

“I did not write this to be a battle cry or for half of America, I wrote it for the entire country,” he says. “I’m holding my breath to get that phone call from a Texas cousin or aunt, telling me, ‘I watched your show and it was pretty good.’ That is my mark of success.”  — from The Washington Blade and National Gay Media Association