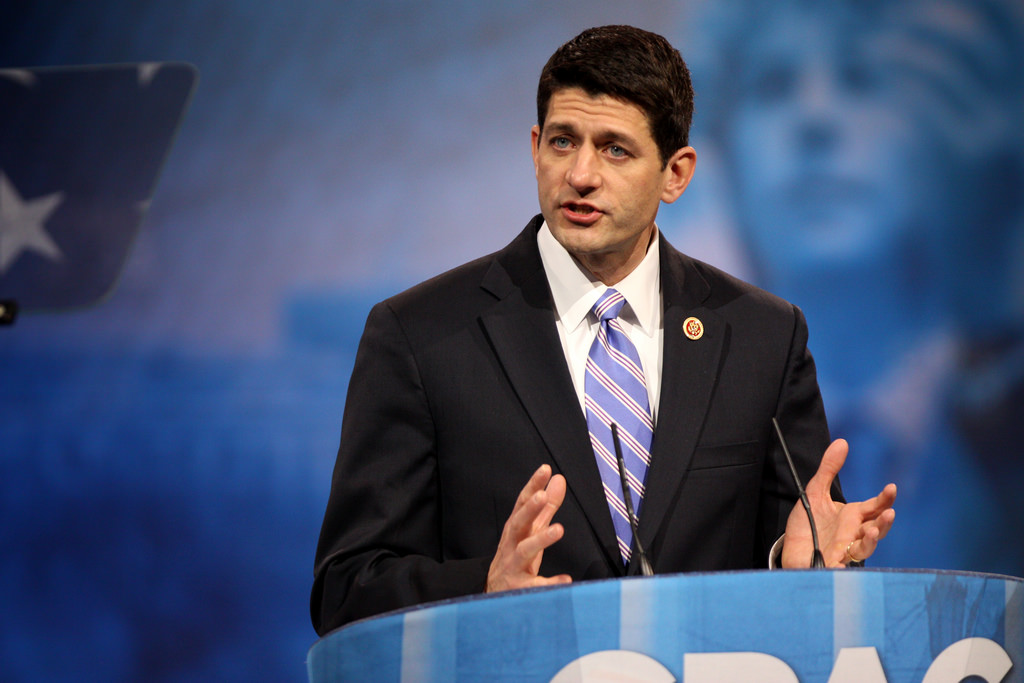 Ryan made the comments Thursday during his weekly news briefing when defending Trump’s controversial executive order, which has been criticized as a Muslim ban because it prohibits people from seven Muslim-majority countries from entering the United States.

“This is not a Muslim ban,” Ryan said. “If it were, I would be against it. We are a tolerant, pluralistic country. We are and we will be. It’s really important.”

Ryan recalled a bill the Republican-controlled Congress passed in 2015 that would have banned Syrian refugees from entering the United States amid civil war and atrocities committed by the Islamic State of Syria and Iraq. Forty-seven House Democrats voted in favor of that legislation, including gay Reps. Jared Polis (D-Colo.) and Sean Patrick Maloney (D-N.Y.) and Kyrsten Sinema (D-Ariz.), who is bisexual.

“The bill we passed last year, if you recall, after the Paris shooting, it became clear to us that one of the terrorists infiltrated the refugee population coming from Syria,” Ryan said. “So, we wanted to make sure that that didn’t happen in this country. That’s just sort of National Security 101.”

Ryan said the bill came about after lawmakers asked government officials if they could vet Syrian refugees to ensure terrorist attacks like the one in Paris wouldn’t happen in the United States and they said, “‘No. We Can’t.’” Despite Ryan’s words, the Obama administration insisted refugees go through an extreme vetting process removing anyone with potential ties to terrorism.

“And so that’s why we passed legislation with 289 votes — a big, bipartisan bill saying let’s this pause this program until we can figure out how to get it right,” Ryan said. “That’s effectively what this is about.”

The Trump order bars Syrian refugees indefinitely and more generally places a 120-day ban on refugees entering the United States pending review, but when the review is completed institutes a preference for refugees seeking asylum from religious persecution.

Ryan asserted that policy isn’t a religious test — which may be unconstitutional — by asserting the Obama administration made a priority for refugees facing anti-LGBT persecution.

Ryan made the case a priority for refugees facing religious persecution makes sense because religious minorities, such as Christians in the Middle East as well as Sunni Muslims in Shia countries are being targeted.

“So there’s nothing wrong in saying we’re going to take into account minority religious persecution with our refugee situation,” Ryan concluded.

In 2015, then-White House Press Secretary Josh Earnest indeed stated LGBT people facing persecution overseas would be a priority for refugees coming into the United States, but one of many priority classifications of people, including race and religion.

Earnest made the remarks in response to a request from LGBT advocates led by the Organization for Refuge, Asylum & Migration, or ORAM, to set aside 500 slots for LGBT people facing persecution in the 10,000 additional Syrian refugees former President Obama wanted in the United States.

“There are no quotas that are set aside, but the process that we have implemented does prioritize the cases of those who have been subjected to torture, including like the torture that you described, or might have been singled out for their status as a minority, whether that’s a racial minority or an ethnic minority or a religious minority, or even somebody — an LGBT person,” Earnest said.

“It is true that the Obama administration’s 2011 memorandum on LGBT rights worldwide set out several areas of focus including LGBT refugees and asylum seekers,” Grungras said. “However the administration never gave priority of any kind to LGBT refugees. The State Department’s refugee bureau consistently declined to set out a special category for this extremely vulnerable group and also declined to set out a quota or target number. Such was the response to ORAM’s petition calling for admission of 500 LGBT refugees.”

Of the more than 70,000 refugees the Obama administration admitted to the United States last year, Grungras estimated fewer than 200 came in under the LGBT social group category.

—  This article was provided to The Pride Los Angeles by the National Gay Media Association and was written by The Washington Blade.