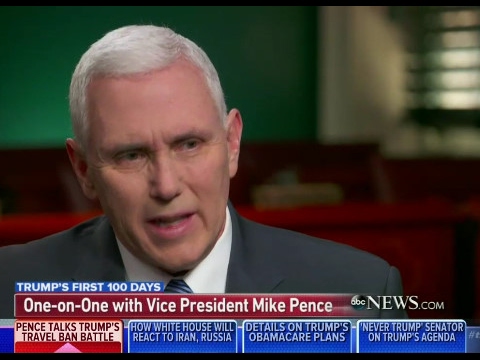 Vice President Mike Pence on Sunday began an exchange on ABC’s “This Week” with an effort to affirm support for LGBT people, but subsequently dodged on whether he thinks a religious freedom executive order is needed that could undermine LGBT rights.

“I think throughout the campaign, President Trump made it clear that discrimination would have no place in our administration,” Pence said. “I mean, he was the very first Republican nominee to mention the LGBTQ community at our Republican National Convention and was applauded for it. And I was there applauding with him. I think the generosity of his spirit, recognizing that in the patriot’s heart, there’s no room for prejudice is part of who this president is.”

Turning to the social conservatives whom Trump addressed last week at the National Prayer Breakfast, Pence recalled Trump’s pledge to repeal the Johnson Amendment, a 1954 law that prohibits non-profit organizations, including churches, from making political endorsements. The law, Pence said, has “put a chilling effect on free speech in religious institutions around the country.”

The words in favor of LGBT rights are striking for Pence, who a has long anti-LGBT history that includes signing into law as Indiana governor a “religious freedom” bill that would have enabled anti-LGBT discrimination.

But Pence declares support for LGBT rights as a draft executive order — apparently from Trump administration — is circulating among federal advocacy groups that would enable anti-LGBT discrimination in the name of “religious freedom.” White House Press Secretary Sean Spicer denied last week Trump would sign a “religious freedom” executive order — at least for the time being — as media outlets reported Ivanka Trump and Jared Kushner had a role in quashing it.

Asked by Stephanopoulos whether a “religious freedom” order is necessary, Pence deflected and said the president “made it clear that he wants to take action on the Johnson Amendment.”

“Back in the 1950s, the Congress passed a law that essentially threatened the tax-exempt status of churches and synagogues and religious institutions if they were seen to be involved in political expression,” Pence said. “And I have to tell you, I don’t think we’d have ever made it to these hallowed halls back in 1790 if the pulpits of this country had been silenced from speaking about what they thought was right and wrong.”

Pence alluded to possible executive action on the Johnson Amendment, saying Trump “directed the administration to begin to look at ways, both legislatively and through executive action” to undo the law.

When Stephanopoulos asked whether no “religious freedom” order would be forthcoming aside from possible action on the Johnson Amendment, Pence dodged and said “that’ll be the purview of the president to determine whether any of that’s necessary.”

“But I will tell you for our part,” Pence said. “The focus of this administration will continue to be to have a safer America, to have a more prosperous America, and to continue to advance the president’s agenda, both on Capitol Hill and through executive action and carry that message all across the country.”

“They claim they want to protect the LGBT community but then they say they want to promote the religious freedoms of evangelicals,” Cruz said. “The issue, of course, is that these so called religious freedoms impede on the rights of LGBT Americans. The two cannot exist at the same time as one infringes on the other. The Trump administration will always choose the beliefs of anti LGBT evangelicals over the dignity and rights of LGBT people.”